New home for Airlie Beach as she sells for €140,000 at November Sale 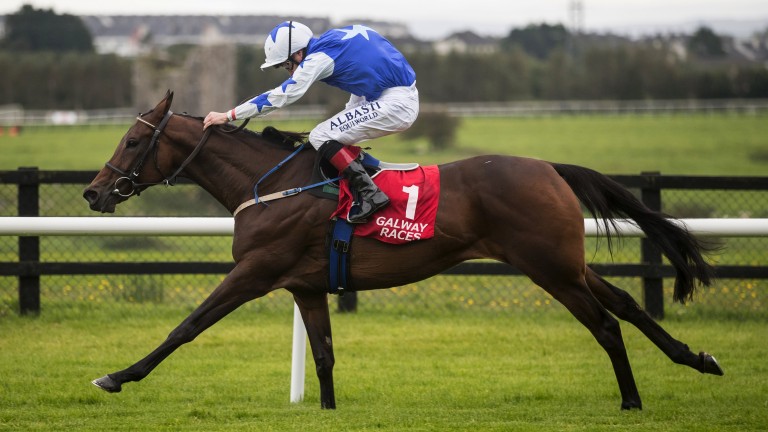 Grade 1 winner Airlie Beach, who won the Listed Oyster Stakes on her final start, was sold for €140,000 at the Tattersalls Ireland November National Hunt Sale on Friday. She was bought by John Flood of Boardsmill Stud, where Mount Nelson stood his first season in 2017, on behalf of an undisclosed client.

All the main players were in place before Airlie Beach, the first of four mares to be offered from champion trainer Willie Mullins’ Closutton Stables, was brought into the ring by Stephanie Searle.

David Magnier of Grange Stud, Sunnyhill Stud’s Michael Hickey, Flood and Peter Molony of Rathmore Stud were among those making a play for the daughter of Shantou, a six-time winner over hurdles, but it was Flood who held the winning hand when the hammer came down at €140,000.

“She was the pick of the day and has been bought on behalf of a client who is putting together a nice band of high-class broodmares,” said Flood. “We knew her from her time at the stud when she visited Mount Nelson and she is a really good fit for him.”

Mount Nelson transferred to the Flood family’s Boardsmill Stud in County Meath this year from Newsells Park Stud, and the Eclipse-winning son of Rock Of Gibraltar has enjoyed a stellar season book-ended with top-level triumphs.

His son Penhill won the Grade 1 Albert Bartlett Hurdle at Cheltenham in March for Airlie Beach’s trainer Willie Mullins and ended the Flat season with the success of Librisa Breeze in the Group 1 Champions Sprint, both horses are owned by Tony Bloom.

“Her race record speaks for itself and her last run on the Flat was very classy, she got a rating of 100 for it and that shows how good she could have been on the flat,” added Flood.

Airlie Beach was bred by Jacqueline Mullins and has already produced a foal, her four-year-old gelding Accidental, an unplanned and unexpected foal. For her second official covering Airlie Beach could return to Mount Nelson, who proved very popular with Irish breeders.

"Mount Nelson was fully booked in his first year with us,” added Flood. “He is a good match for Airlie Beach as he is a big horse and puts size into her.”

The unlikely stallion lurking among the Mullins ranks