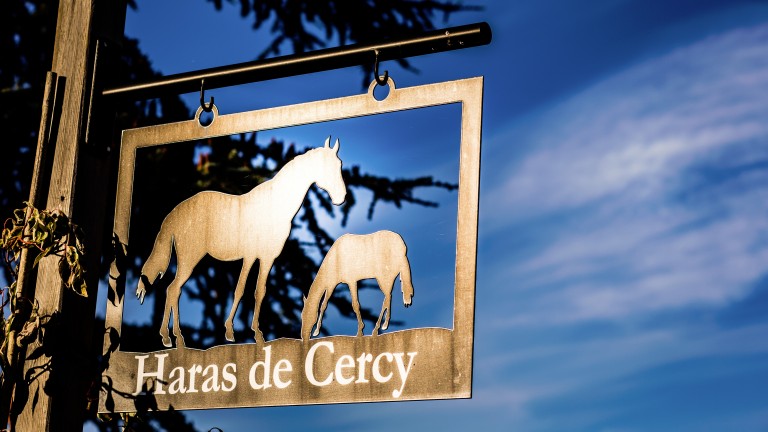 The new blood is important as Cercy was dealt a cruel blow last year with the loss of its star stallion Saddler Maker. His success as a sire had reached new heights earlier in 2016 with Apple's Jade strolling to victory over Triumph hurdle winner Ivanovich Gorbatov in the Aintree Juvenile Hurdle by 41 lengths.

Alpha Des Obeaux and Bristol De Mai were among the other runners last year who consolidated Saddler Maker's reputation as an outstanding sire of jumpers.

Fanny Cyprès - daughter of Cercy president Jacques, also the breeder of Vaniteux, Saint Are and The Fellow - said: "We've had some really bad luck losing stallions such as Saddler Maker and Voix Du Nord but, as we say, we've had a glorious past and our future is even brighter with the young stallions we have standing here now."

Cyprès reported that all the great and good of French jumps breeding turned up for the stud's open day.

"We're delighted to see more and more people coming to our open house each year and 2017 far exceeded our expectations with more than 300 breeders and enthusiasts attending," said Cyprès. "It's a great time for people too, as it gives them a good reason to socialise before the breeding season really kicks off."

Karaktar is a son of High Chaparral, bred and raced by the Aga Khan. Trained by Alain de Royer-Dupre, he is a multiple Group 3 winner over 1m2f with his best performance arguably being his three-and-a-half-length win in the Prix Noailles.

The time is certainly right for a son of the late High Chaparral to retire to the jumps ranks as promising chaser Altior is one of his sons and remains favourite for the Racing Post Arkle at Cheltenham in March.

Free Port Lux joins Karaktar in standing his first season at the Bourgogne stud. A son of Oasis Dream out of the Grade 1 Beverly D Stakes winner Royal Highness, he boasts an ideal balance of speed and stamina to suit France's collection of staying mares.

"My father and several of the board went to look at Free Port Lux and they were immediately struck by how similar he was to Network; he must get that from the dam as she is a daughter of Monsun," said Cyprès.

"Both new stallions were really well received by breeders and we have close to 80 mares booked into each already and we'd hope they would have covered 100 mares each by the end of the season.

"We're extremely lucky in the way these stallions are owned as our shareholders are keen to support them and will send plenty of their own mares."

Established in 2013, Haras de Cercy was developed in response to the loss of stallions at France's national stud. A co-operative-like organisation was formed where a group of passionate breeders joined together to ensure their continued access to quality stallions at reasonable prices.

The base stands several stallions including Cokoriko, a son of Robin Des Champs, whose first crop turned two on January 1. Of the 153 horses he has on the ground, 91 were conceived in his first crop.

A 2015 addition to the roster was Rail Link, an Arc-winning son of Dansili who is responsible for Group 1 winners Epicuris and Spillway. Transferred to Haras de Cercy from Juddmonte's Banstead Manor Stud, the champion three-year-old covered 275 mares in his first two French seasons.

Dubbed the rising star of Cercy, Gris De Gris's first crop are now five. Included in this is the unfortunate Campeador, who has hit the deck at the last hurdle in his most recent two starts for Gordon Elliott. The first fall came when mounting a serious challenge to pass the post in front in the Grade 3 Fred Winter Juvenile Hurdle at Cheltenham and most recently when looking the winner of a Grade A handicap hurdle at Fairyhouse.

Stud residents also include Lauro, Racinger and Coastal Path, the latter of whom is responsible for promising young hurdlers Bello Conti, Bacardys and Coastal Tiep.