National Hunt buyers out in force during Autumn Sale opener

Willie Mullins, Highflyer and JP McManus all in action 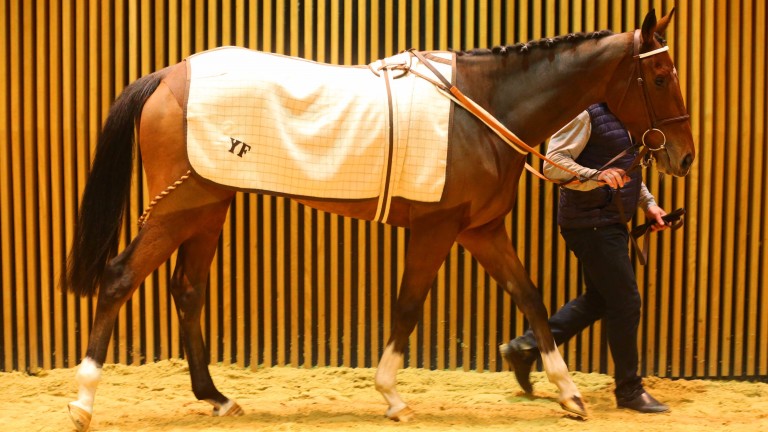 A first-ever visit in person to Arqana by JP McManus and strong competition from both Willie Mullins and Highflyer Bloodstock's Anthony Bromley led to some fiery exchanges among jumping's superpowers for the top lots in the opening session of the company's Autumn Sale on Monday.

While none of their combined buying power could persuade connections to part with Sunday's Grade 1 winner Capivari - the Francois Cottin-trained four-year-old was bought back for €320,000 - it was McManus who came out on top for Dostal Phil, a Coastal Path three-year-old who won his only start for Yannick Fouin on the Flat at Deauville.

Barbe said: "He won well the first time out and he is a very nice individual from a good family. He has everything. We tried to buy him privately but he ended up in the ring."

Reflecting on McManus making a rare trip to France, Barbe said: "It's his first visit to Deauville so we had to get a good horse for him. We bought the horse that came second [Demon D'Aunou] in the same race at the Cheltenham sale last week so we are all-in on that form."

Swan was also the last man standing at €250,000 for Charli Parcs, who won on debut over hurdles at Enghien at the beginning of the month for trainer Arnaud Chaille-Chaille, and is by Anabaa Blue.

Swan said: "I liked his way of running. It will be difficult to get him out again in his novice season but we like him a lot."

British-based buyers come to the party

Bromley dug deep twice for the same unnamed British-based client as the sums mounted late in the session.

A bid of €210,000 secured Charming Zen, a three-year-old son of Youmzain who waltzed to a ten length success on his only hurdles start for Patrice Quinton.

"I thought he was very impressive on his only start and he is a lovely stamp of a horse, gorgeous looking," said Bromley. "He was my favourite horse today but we'll see. It's not easy to buy them and there are more fireworks to come I think. The prices are strong for the nice horses and I wasn't surprised."

The Fabrice Foucher-trained Doux Pretender won an AQPS Bumper at Nantes last month and went to Bromley for €190,000.

"Great Pretender is a stallion I am very keen on and I have had a lot of success with him through Ptit Zig and others," said Bromley. "Unlike some of the others I hadn't seen him before but I loved him this morning, he has a lot of quality. He beat four previous winners and was tough in his bumper."

"He is a lovely young horse and it is just a shame he has already won his chase because he will only be a novice for the rest of the season," said Malone. "He is big, backward immature type of horse who has the look of a chaser a couple of years down the road. I'm happy to get him and he goes to Paul Nicholls."

Mullins looking to Melbourne as well as Cheltenham

Working in partnership with Pierre Boulard, Kirk's purchases reflected the increasing focus of the Mullins operation on chasing the big staying prizes on the Flat, with several purchases designed to fit the brief of dual-purpose horses.

The leading example was the 95-rated Chelkar, previously trained by Jean-Claude Rouget for the Aga Khan and by Azamour out of a full sister to Arc runner-up Cherry Mix.

"We think he can progress next year on the Flat," said Kirk, who went to €160,000 for Chelkar, who won twice in four starts for Rouget. "We have been lucky with Aga Khans and he is out of a Linamix mare so he ought to jump. But he can make a good stayer on the Flat first. He has a good rating and he is a big, scopey horse. He can do two jobs but he has been bought as a potential Melbourne Cup horse one day."

Kirk's faith in Linamix as a sire of broodmares for future jumping prospects was also in evidence when he gave €115,000 for Makitorix, a winning Makfi colt from trainer Yan Durepaire.

Kirk said: "Both Dubawi [sire of Makfi] and Linamix get jumping horses. I have bought him as a dual purpose horse to go over jumps and as a stayer on the Flat. It's a fantastic pedigree and hopefully he will improve. I bought a horse off the trainer before called Alonso who was very good though unlucky."

Two further purchases had more of a jumping stamp to them, both offered by trainer Laurent Viel.

Kirk paid €130,000 for Didero Vallis, a three-year-old son of Poliglote who has been placed in all four starts including one of the best AQPS Bumpers in France, the Group 3 Prix de l'Avenir at Nantes.

"We have been very lucky with Laurent Viel and he will hopefully make a lovely staying jumper in time," said Kirk of Didero Vallis, who is closely related to last year's €355,000 sale-topper, Chirico Vallis.

The same price secured Antey, a winning three-year-old son of Lord Of England, who will go jumping next season with Mullins.

Top Flat prospect off to Australia

Chris Waller will be the new trainer of Carzoff, who made the running at the top of the table for much of the afternoon after Guy Mulcaster signed at €225,000.

The three-year-old son of Zoffany was highly tried with trainer Alain Couetil, most recently finishing three and a half lengths behind the well-regarded Maniaco in the Listed Prix Vulcain.

Staying nearer to home will be Aztec Dreams, the top-priced lot among those catalogued from Andre Fabre.

A Wildenstein-bred Oasis Dream half brother to Apache Spirit from the family of Aquarelliste and placed four times from five starts with Fabre, Aztec Dreams will be heading across the road to join Deauville trainer Stephane Wattel after the hammer fell at €85,000

"He is for an existing association with Lord Clinton and Adrian Pratt," said Wattel. "He is well made and I hope he can progress with his career at four on the Flat. He might also be a horse for jumping later."

Overall the sale outperformed the same day last year, with increases in virtually all categories.

With ten more lots catalogued than 12 months ago, the clearance rate rose from from 81 per cent to 84 per cent, contributing to a turnover of €5,327,500, a rise of more than seven per cent.

FIRST PUBLISHED 1:37PM, NOV 15 2016
We have been lucky with Aga Khans and he is out of a Linamix mare so he ought to jump. But he can make a good stayer on the Flat first. He has a good rating and he is a big, scopey horse. He can do two jobs but he has been bought as a potential Melbourne