Nathaniel given a price increase after exploits of daughter Enable 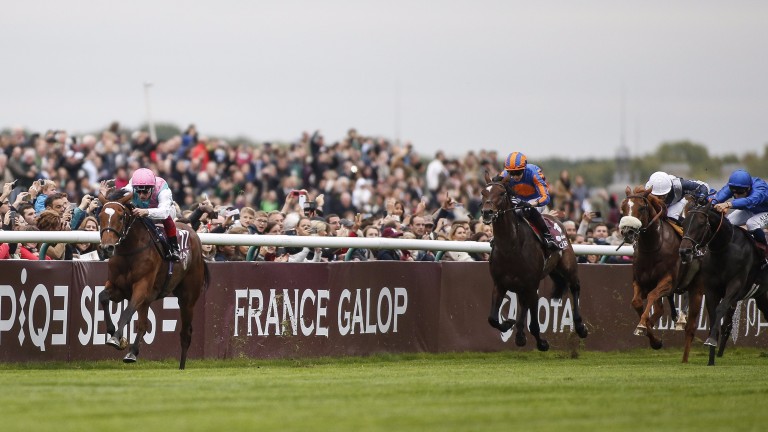 Newsells Park Stud resident Nathaniel has had his fee increased to £20,000 from £17,500 for the 2018 breeding season, after the heroics of his daughter Enable.

The superstar filly, who is from her sire's first crop, capped an outstanding year with victory in the Prix de l'Arc de Triomphe this month to add to successes in the Oaks, Irish Oaks, King George VI and Queen Elizabeth Stakes and Yorkshire Oaks.

Enable's is Nathaniel's leading performer but the sire is also responsible for Group 3 scorer God Given, Listed winners Face The Facts and Natavia, and German Derby second Enjoy Vijay.

Newsells Park Stud general manager Julian Dollar said: "We always felt that Nathaniel's progeny would improve markedly from two to three, but even we could not have imagined that his first three-year-old crop would make such a significant impact. Enable is quite simply a phenomenon. Very few stallions sire a horse as good as her in their entire career. For Nathaniel to produce a horse of her ability with his very first crop marks him out as a special stallion.

"However, Enable was not the only horse by Nathaniel who improved spectacularly during their three-year-old career and the ten other Group and stakes performers from his first crop include high-class colts, as well as fillies like Melodic Motion and God Given, who both improved more than 20lbs during the year. Twelve three-year-olds by Nathaniel are rated 100 or higher - seven colts and five fillies."

Dollar added he felt there is more to come from Nathaniel, too.

"At this stage, Nathaniel's second crop looks even better," he said. "He has several very promising winners including House Edge, This Girl, Perfect Clarity, Highgarden, The Kid, Bobby B and Dina, none of whom will have to improve a great deal to become high class three-year-olds in 2018.

"Nathaniel offers breeders exceptional value at £20,000. I don't believe there is another proven young stallion standing in Europe that is capable of siring runners of that class for anything close to that fee."

The Hertfordshire farm has also held the fee for dual King's Stand Stakes hero Equiano who remains at £8,000.

Equiano's best performer is The Tin Man, who won the Diamond Jubilee Stakes at Royal Ascot and finished third in the Haydock Sprint Cup this year, having scored in the British Champions Sprint Stakes in 2016.

Dollar added: "Our other Group 1 sire, Equiano, is a potent source of speed and a model of consistency. Thirteen Group or stakes winners from his first three crops, including six Group or stakes winning two-year-olds and a dual Group 1 winner in The Tin Man, mark him out as stallion that should appeal to breeders looking for speed as well as great value.

"Equiano is the leading British-based sire of sprinters by winners and the leading fourth crop sire in Britain and Ireland by prize-money.

"A son of Acclamation, he compares favourably with his own exceptional sire at this stage of his stud career having produced more top horses and more high class two-year-olds from his first three crops than he did.

"Equiano is a proven sire of fast horses, 89 per cent of his progeny’s wins have been over less than a mile, and his record is only set to improve over the years ahead."

FIRST PUBLISHED 5:21PM, OCT 30 2017
For Nathaniel to produce a horse of her ability with his very first crop marks him out as a special stallion