My Risk, father of Sire De Grugy and in-demand No Risk At All, dies at 21

Son of Take Risks succumbs to a heart attack 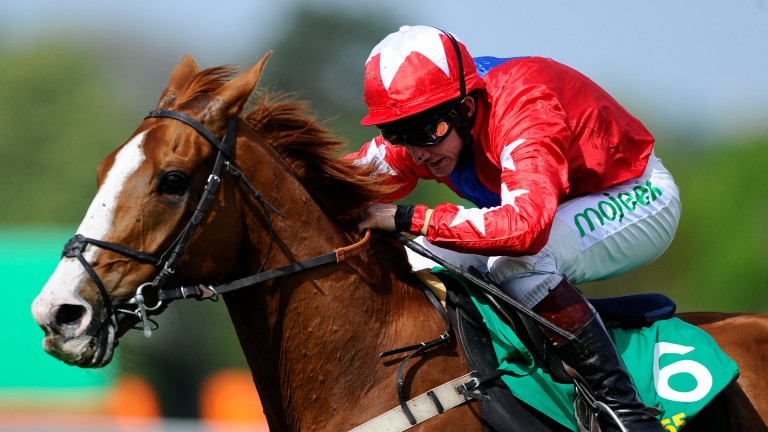 My Risk, best known as the sire of top-class two-mile chaser Sire De Grugy and popular jumps stallion No Risk At All, has died at Haras du Lion in France aged 21.

The son of Take Risks suffered a heart attack after covering a mare at the stud, which he joined this year from Haras de Victot.

My Risk was trained by Jean-Marie Béguigné and won seven of his 14 starts in the colours of joint-breeder Roland Monnier, including four Group 3 mile contests between the ages of four and five – the Prix Quincey, Prix Perth, Prix Edmond Blanc and Prix du Chemin de Fer du Nord.

He earned his joint-highest Racing Post Rating of 119, though, for finishing a close third to the outstanding pair Whipper and Six Perfections in the Prix Jacques le Marois on his only venture into Group 1 company.

My Risk proved versatile at stud, supplying talented performers both on the Flat and over jumps.

His best representatives on the Flat are dual Group 3 winner and Prix d'Ispahan third No Risk At All, Prix des Reservoirs scorer Barouda and Prix la Rochette winner Kontrastat, who later struck at Group 3 level in Hong Kong under the name The Golden Age.

Stationed at Haras de Montaigu, No Risk At All has become one of the most in-demand jumps sires in Europe with his first crop having yielded this month's Champion Hurdle heroine Epatante and narrowly beaten RSA Chase third Allaho, as well as Henry VIII Novices' Chase winner Esprit Du Large.

My Risk has delivered a number of useful jumpers in France but by far his most notable runner in this sphere is Sire De Grugy, a popular customer for Gary Moore whose 17 victories included the Queen Mother Champion Chase, Clarence House Chase, Celebration Chase and two renewals of the Tingle Creek.

France Galop records My Risk as having sired just nine foals in each of 2018 and 2019, but he has 24 three-year-olds and 16 four-year-olds on the ground.

FIRST PUBLISHED 2:31PM, MAR 23 2020
My Risk proved versatile at stud, supplying talented performers both on the Flat and over jumps