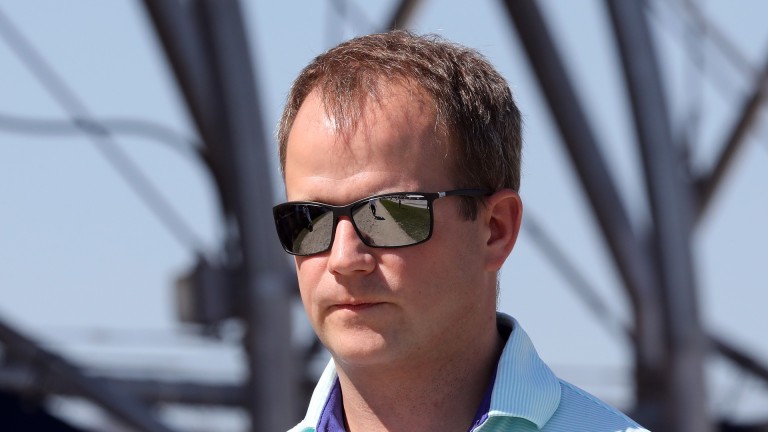 MV Magnier was on hand to supervise the purchase
Fasig-Tipton Photos
1 of 1
By Ron Mitchell and Meredith Daugherty of BloodHorse UPDATED 10:01AM, MAR 28 2019

A protracted bidding war for a striking Curlin colt - eventually purchased by Coolmore Stud's MV Magnier and unnamed partners for $3.65 million - fueled a record-setting edition of the Gulfstream Sale, Fasig-Tipton's selected two-year-olds in training sale at Gulfstream Park on Wednesday.

The average and median prices were overall records for the Florida sale that Fasig-Tipton first conducted in 1984. With 100 horses going through the ring, the 41 that went unsold represented an RNA rate of 41 per cent.

"We saw a marketplace today that we hoped for and expected in many regards," said Fasig-Tipton president Boyd Browning jnr. "The upper end of the market was fantastic with great competition and great depth of buyers and bidders on a large number of horses. We were very pleased with the vibrancy of the market."

Browning said the large number of horses withdrawn from the sale and the RNA rate were higher than Fasig-Tipton officials would prefer, but noted that was not unusual at a juvenile sale.

He said: "The reality is, there are a lot of evaluative tools that go into a two-year-old sale - how the horse looks on the end of the shank, the under-tack show video, the under-tack workout time, and the vet analysis after - that's why the horses that jump through all the hoops bring a significant premium.

"Right now, consignors have other alternatives, so they're not forced to sell, and we'll see a lot of these horses again at later sales and on the racetrack.

"There is tremendous demand for a quality horse, and people are willing to bid aggressively on those."

The sale topper, bred in Kentucky by Hill 'n' Dale Equine Holdings and Vinnie Viola's St Elias Stables, was offered on behalf of his breeders by JJ Crupi's New Castle Farm as Hip 173 and was expected to steal the show.

The colt not only has a stellar pedigree - he is a half-brother to Group 1-placed Arabian Hope and stakes winner Counterforce - but his demeanour all week impressed buyers, agents, and trainers, as did his co-second-fastest workout of an eighth-mile in :10 and his gallop-out following the breeze.

The crowd in the Gulfstream paddock, where the sale was conducted, were enraptured by the contest for the colt, with agent Jamie McCalmont handling the bidding on behalf of Magnier and unnamed partners, who were represented in the transaction by agent Donato Lanni.

On the other side of the paddock, Browning handled the bidding via phone on behalf of a bidder who declined to be identified. Browning finally shut off his phone and yielded to the Coolmore bid of $3.65m, ending a standoff.

"He was such a standout, this horse," McCalmont said. "He is by a great stallion and has a stallion's pedigree. It was very exciting. Let's hope he can do on the racetrack what he has done here."

"When he crossed the wire in the breeze show, everyone was on the phone," said Lanni, adding that Hall of Famer Bob Baffert will train the colt on behalf of Coolmore and "some undisclosed clients that want to stay anonymous. When the horse starts, the names will be in the programme."

Magnier was involved with the purchase outright or in partnership with four of the six horses sold for seven figures at the sale.

With McCalmont again acting as agent, Magnier took home a colt from the first crop of Triple Crown winner American Pharoah for $1.65m.

Consigned as Hip 142 by agent Eddie Woods, the colt was bred in Florida by Cesa Farm and is out of the Graded-winning Tabasco Cat mare Spice Island, making him a half-brother to Florida Derby winner Ice Box. He worked an eighth-mile in :10 2/5 during the under-tack show on Monday and was acquired for $215,000 by Quarter Pole Enterprises from Denali Stud at last year's Keeneland September Yearling Sale.

"Did I think he would bring that? Not in my wildest dreams," an ecstatic Woods said. "They all don't line up. You've got to buy a lot of nice horses and hope one or two of them pan out and put you in front. He's a 'Pharoah.' They've got style. They move well, they have class, and they're quiet. And this horse is beautiful. He's got a head on him you'd kill for."

"His work wasn't that fast, but his gallop out was one of the fastest gallop outs," McCalmont said. "Let's hope he can be somewhat close to what his father was."

Magnier partnered with California-based owner Kaleem Shah, with agent Ben McElroy signing on behalf of the pair, to purchase a Curlin filly consigned as Hip 119 by agent Paul Sharp for $1.3m.

Produced from the Group 2-winning Argentinian mare Sarasota, the filly is a half-sister to Grade 1 winner Salutos Amigos and Grade 2 winner Sarah's Secret. She was purchased for $470,000 by Sand Ridge Stables from agent Bluewater Sales at the Fasig-Tipton Saratoga Yearling Sale.

Magnier also acquired an Into Mischief colt, Hip 15, for $1m from the consignment of Steven Venosa's SGV Thoroughbreds. Foaled on March 7, 2017, the colt bred in Kentucky by Stonestreet Thoroughbred Holdings was produced from the stakes-winning Smoke Glacken mare Cor Cor and breezed an eighth-mile in a co-second-fastest time of :10 during the under-tack show.

The colt was bought by Paul Brodsky for $400,000 from the Summerfield offerings at The October Sale, Fasig-Tipton Kentucky Fall Yearling Sale.

"He's a lovely horse and he breezed very well, and Steve (Venosa) was very high on the horse," Magnier said. "So let's hope he works out. We've had luck with Into Mischief in the past with Practical Joke. Let's hope this fella can be as good as him. He breezed well and he's well-built. Plenty of people here had a high opinion of the horse. It's a lot of money, but I suppose he deserved to make it."

FIRST PUBLISHED 9:34AM, MAR 28 2019
He is by a great stallion and has a stallion's pedigree. It was very exciting. Let's hope he can do on the racetrack what he has done here