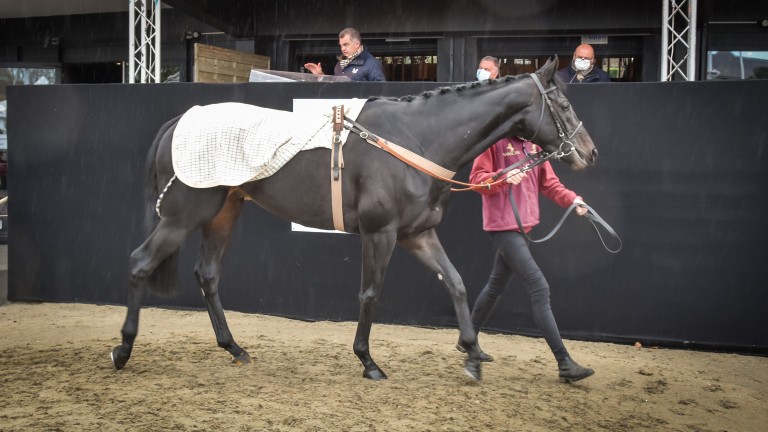 Monday's horses in training section of Arqana's Autumn sale continued two trends that have become increasingly pronounced in Europe, with the near unquenchable thirst of the top British- and Irish-based jumps owners well to the fore, while Australian buying power largely had the last say when it comes to the top Flat prospects.

Willie Mullins and Paul Nicholls can both look forward to welcoming exciting recruits as the National Hunt season hits top gear, after David Powell signed for a pair of lots at €200,000.

Tax For Max (lot 423) has already achieved a rating of 102 in a series of promising runs in Germany for Henk Grewe, including a close-up fourth to stablemate Wonderful Moon in the Group 2 Union Rennen at Cologne.

The three-year-old son of Maxios will carry the colours of Simon Munir and Isaac Souede and heads to Closutton.

"He goes to Ireland to join Willie Mullins as a dual-purpose horse," said Powell. "He'll be prepared for the Triumph Hurdle and then could run on the Flat in long-distance races later."

Out of the Starborough mare Tomato Finish, Tax For Max was a fine result for owner-breeder Volker Kaufling, who bought back the colt after bidding stalled at €30,000 as a yearling at Baden-Baden.

Sharing top billing was the jumps bred Houx Gris (lot 434), the winner of an AQPS bumper and most recently a three-year-old conditions hurdle race at Auteuil for trainer Sylvain Dehez.

The Gris De Gris gelding went into plenty of notebooks that day when battling to a neck defeat of Homme Public, though Powell was already a long-time admirer. 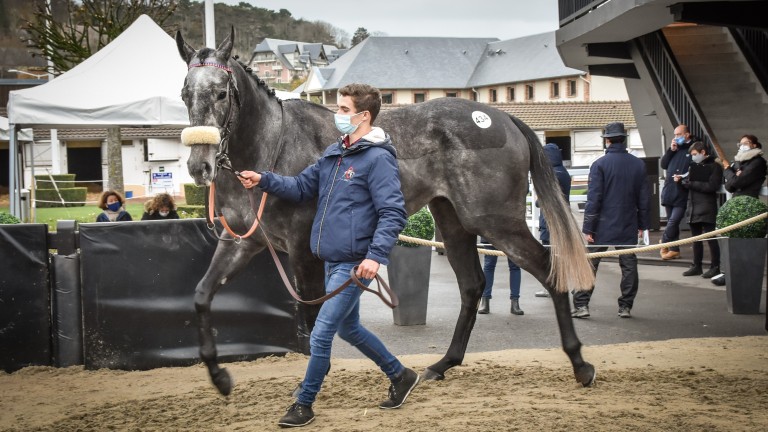 Grey day: Houx Gris will be trained by Paul Nicholls after sharing top price at Arqana at €200,000
Arqana

"I bought him for Jared Sullivan to go to Paul Nicholls," said Powell, who when asked what he liked about Houx Gris said simply: "Everything! I've been wanting to buy the horse ever since he made his debut. He ticks all the boxes and I thought he might even make a little bit more."

Hubert Barbe of Horse Racing Advisory also featured strongly towards the top of the buyers' board, with Hercule De Seuil (lot 464) the most expensive at €185,000 of three purchases set to carry the green and gold of JP McManus.

Bred by the Boudot family and trained by Mickael Seror, the son of the late Saddler Maker was second on his debut at Strasbourg.

"All three are for JP, though it is yet to be decided which trainers they will go to," said Barbe. "Hercule Du Seuil is a little backward but is a powerful individual and will be given time over the winter before running early next year."

Barbe also paid €175,000 for the four-year-old Poliglote gelding Goven (lot 456) from the Alain Couetil yard, and €150,000 for Head Law (lot 471), a Network three-year-old from the family of Delta Work and an easy winner on his only start for Gabriel Leenders.

"I think the whole team is very satisfied with what we've paid today," said Barbe. "I think we've bought some good horses and the market prices have been reasonable. I have to salute the vendors, who have had to make an effort to adjust."

The Andre Fabre-consigned Arapaho (lot 418) will continue his career on the Flat in Australia after Mark McStay's Avenue Bloodstock and trainer Bjorn Baker won out at €140,000 for the son of Lope De Vega.

An impressive winner of the Listed Prix du Pont Neuf over seven furlongs shortly after the restart of racing in May, Arapaho was bred by Elisabeth Fabre's Ecurie Peregrine and was purchased privately by Coolmore after winning by three lengths on his debut. 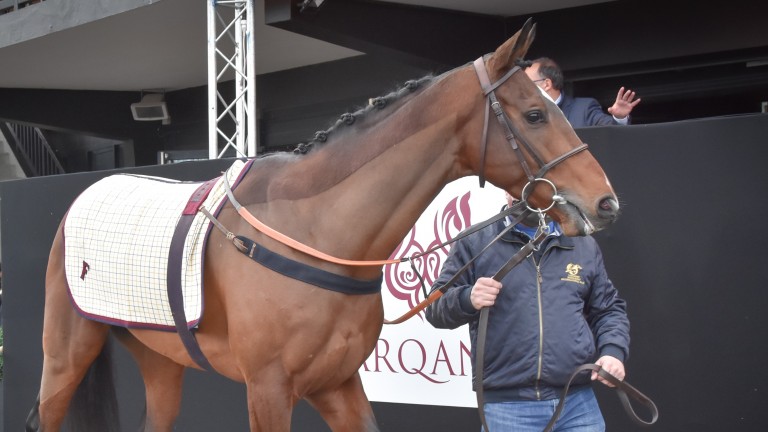 Lope De Vega's Arapahao will continue his career in Australia with trainer Bjorn Baker after making €140,000 at Arqana
Arqana

Wertheimer et Frere's Mizzen Mast gelding Flambeur (427) is also heading to the southern hemisphere after trainer Matthew Smith landed the Listed winner over the phone with a bid of €100,000.

Also shopping for horses to run in Australia was John Hammond, who struck for the two highest-priced lots from the Aga Khan Studs consignment.

Hammond was pushed hard by agent Bertrand Le Metayer before having the last say over Ashim (lot 346) at €90,000.

The three-year-old Stormy Atlantic colt won twice from six starts for Alain de Royer-Dupre and has earned a rating of 83 from limited chances.

Out of the Listed-placed Ashiyla, Ashim hails from the immediate family of Poule d'Essai and Prix du Moulin hero Ashkalani.

"He's a nice horse on the up and he's coming off a good run," said Hammond. "He's an improving three-year-old and beautifully presented."

Also set to represent the same interests is Vardani (lot 394), a 91-rated son of Charm Spirit who is two from three for Royer-Dupre and is a half-brother to the Aga Khan's excellent stayer Vazirabad.

"He has good form on fast ground and I thought he was impressive when winning at Chateaubriant," said Hammond, who gave €72,000 for the three-year-old. "It was firm ground and he came from behind that day."

Two of the more hotly-contested lots will be staying in Chantilly.

Joakkim Brandt - husband of and co-licence holder with Pia Brandt - went to €60,000 for Shoal Of Time (lot 395), a lightly-raced son of Lope De Vega for Godolphin and Fabre.

"I liked the type, he is really a very handsome horse," said Brandt. "It was a little bit more than expected but we really like him and we went a bit further than we planned to."

The same sire's Perhaps (lot 390) attracted the attention of Nicolas Clement, who signed on behalf of partner and agent Tina Rau at €56,000.

A winner over a mile at Vichy for Francis Graffard, Perhaps is from the speedy Wertheimer family of this year's Prix d'Arenberg winner Kalahara.

"She's a beautiful filly and by Lope De Vega," said Clement. "Hopefully we can keep her at four and I would love to win a bit of black type with her because she has a beautiful page and looks to match."

Average down as vendors adjust

Trade was not easy for those looking to sell in comparison to the same day last year, with the average dropping from €34,860 to €24,597, though horses continued to change hands as the clearance rate held up well at 77 per cent.

The sale continues on Tuesday with a session devoted to two-year-old store horses.

FIRST PUBLISHED 8:16PM, NOV 16 2020
He'll be prepared for the Triumph Hurdle and then could run on the Flat in long-distance races later