Muhaarar off the mark at stud with impressive debut winner

Shadwell homebred Raheeq scored by a wide margin at Bath 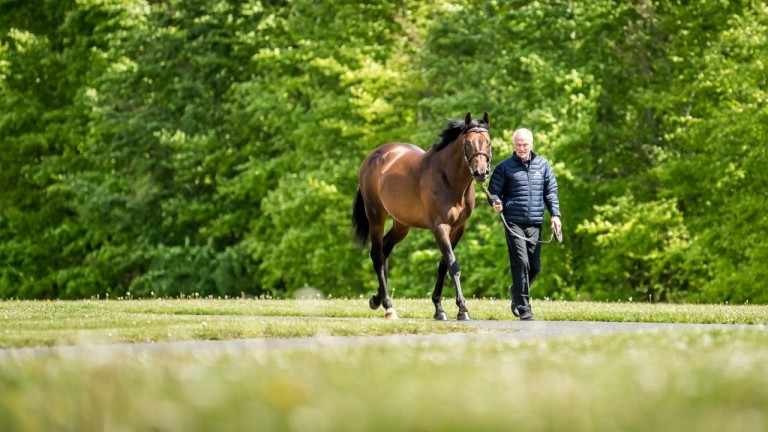 Exceptional sprinter Muhaarar opened his account at stud on Wednesday when Shadwell homebred Raheeq scorched to a four and a half length debut success over five and a half furlongs in the Boniti/British EBF Fillies' Novice Stakes at Bath.

Raheeq was waited with by jockey Jim Crowley, but having led two furlongs out she readily drew clear in impressive fashion. Her rider said afterwards: "She's a filly we've always liked and she was very professional. She has lots of speed and is potentially smart."

The speedy youngster has a pedigree that screams precocity. Not only is she by a Gimcrack Stakes winner, but the Roger Varian-trained filly, one of 105 juveniles in her sire's first crop, is the sixth foal out of Shimah, a daughter of Storm Cat who beat Chintz - better known as the dam of The Gurkha - to land the Listed Saoire Stakes at two.

Shimah, a half-sister to Haatef, is now the dam of four winners, and has already clicked to good effect with Muhaarar's sire Oasis Dream to produce the Listed-winning two-year-old Mushir.

The 13-year-old Shimah has a Kingman yearling filly and produced a colt by Muhaarar earlier this year.

Although it may have taken longer than some expected for Muhaarar to post his first winner, there is almost certainly plenty more to come from his debut two-year-olds given they were bred from a book that contained 72 black type performers (56 per cent), 53 stakes winners (41 per cent) and 31 mares (24 per cent) who were successful at Group level themselves.

His sons and daughters also proved in high demand at the latest round of yearling sales, with his progeny results headed by a 925,000gns half-sister to Fairyland bought by Shadwell.

The son of Oasis Dream has stood at Nunnery Stud at a fee of £30,000 since his retirement from racing.

FIRST PUBLISHED 11:30PM, JUN 26 2019
The speedy youngster has a pedigree that screams precocity

'He's a horse we like a lot' - Roger Varian could hold key to big-field handicap Albany winner Sandrine a breakthrough star for Bobby's Kitten Brothers Broome and Point Lonsdale seeking a famous Ascot double Frankel colt Last Kingdom one of two new stallions for Kooringal Stud Another proud sporting moment for Hearn family as Subjectivist strikes Gold Like father, like son at Royal Ascot with a perfect result for Ardad