White wonder: rare yearling stands out from the crowd at Fasig-Tipton 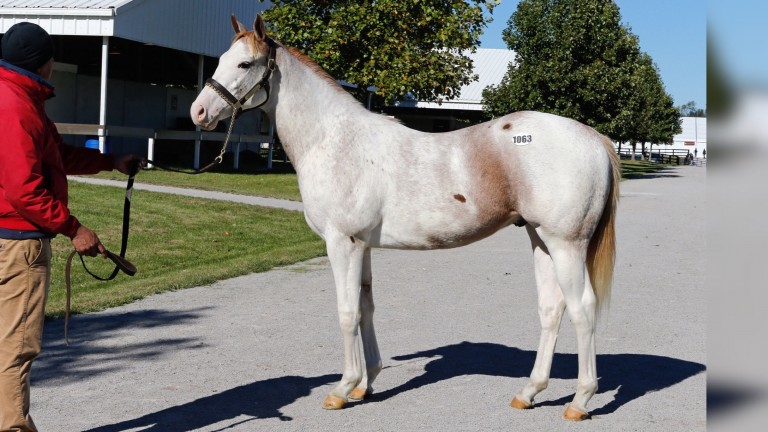 As the afternoon was winding down at Fasig-Tipton’s Newtown Paddocks in Lexington on Sunday, Pam Robinson of Brandywine Farm figured that one colt in her consignment for the October Yearling Sale had been requested for inspection about 75 times.

While he may not have the most notable pedigree or be the biggest on the grounds, this colt is surely among the clear leaders when it comes to being unusual.

From the last crop by champion California Chrome’s sire, Lucky Pulpit, the colt is one of the rare individuals that has been registered as white, and he comes by it quite naturally as both his dam, the unraced Old Fashioned mare Passionforfashion, and his granddam, the Trust N Luck mare Turf Club, are both registered white.

“He’s a novelty,” said Robinson, who has clearly grown fond of the youngster. “Some people have come to the barn specifically to see ‘the white horse,’ and there have been about five or six photographers here.

“I describe him as a cutie pie,” she added affectionately. “He has a lot of personality. He’s almost like a teddy bear. Everybody who has seen him at the farm has fallen in love with him. They all want him.” 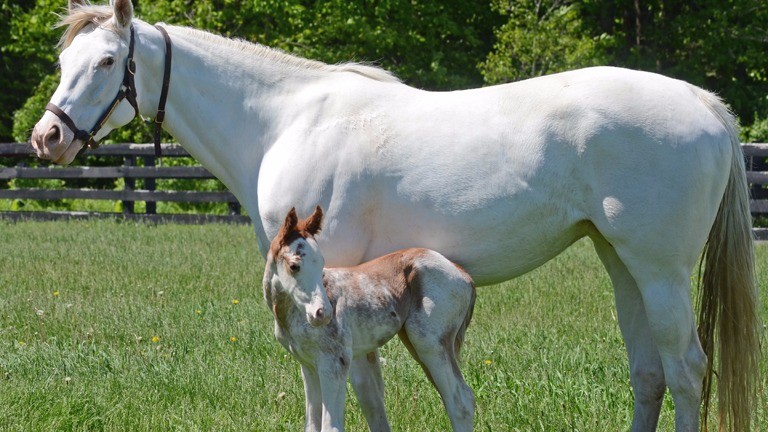 Foaled on May 19 of last year, the colt is one of 29 yearlings registered in Lucky Pulpit’s last crop and the only one in the October Sale catalogue. His sire died in February 2017 of a heart attack while covering his first mare of that season, and the American Jockey Club does not list any 2018 foals for him.

As a late foal, as well as the initial foal produced by his dam, the colt lacks height compared to some others on the Fasig-Tipton grounds, but he has good substance and clear x-rays, Robinson said.

He also has a few large spots that almost resemble those seen on Appaloosas; strawberry blonde hair in his mane and tail, and a light chestnut marking on and between his ears that is known among Native Americans as a medicine hat, indicating a horse with magical powers, according to their lore.

Robinson said she is not sure what kind of value the market would place on the colt, who, as a registered New York-bred, is eligible for that state’s rich racing and breeder rewards programme and who counts Grade 1 winner and sire First Dude among his female family.

Catalogued as hip 1063, the colt is set to enter the Fasig-Tipton ring on October 24 during the third session of the four-session auction that begins on October 22. He was bred by Gary Tolchin’s Golden Goose Enterprises.

“He’s not going to be a horse for everybody, but he’s a horse that has upside with a potential second career,” Robinson said, noting the colt’s eye-catching looks, kind demeanor and intelligence.

Remarkably, since white horses are so rare, two have been entered for the October Sale and both come from consignors who have offered white horses at this sale in the recent past.

Hip 187, already named Beautiful Patriot, is a white filly by Revolutionary out of the winning Devil His Due mare Beautiful Devil, a white mare whose first three dams also are registered as white. Beautiful Devil’s fifth dam, White Beauty, became one of the first registered white thoroughbreds when she was born in 1963.

Beautiful Patriot is consigned by Warrendale Sales and was bred by Patchen Wilkes Farm of Kentucky, which has a distinguished history of breeding white thoroughbreds. Patchen Beauty, third dam of Beautiful Patriot, produced five white foals.

Warrendale consigned the white Painted Patchen, a Thunder Gulch colt later gelded and a half brother to Beautiful Devil, to the Fasig-Tipton October Yearling Sale in 2014 and he was purchased by Stoneway Farm for $29,000. He has won three races and $68,775.

Last year at this sale, Brandywine consigned Blizzard Condition, a white colt by Get Stormy bred by Denise Purvis who was sold for $21,000 to Becky Thomas.

At the Fasig-Tipton February sale of 2015, Calumet Farm purchased a then two-year-old white Silver Mountain filly named Polar Foxx for $25,000. Polar Foxx was unraced but has produced two foals to date for Calumet by the registered black stallion Risque Remarque, who has large splashes of white on his body.

FIRST PUBLISHED 2:11PM, OCT 23 2018
Some people have come to the barn specifically to see ?the white horse,? and there have been about five or six photographers here