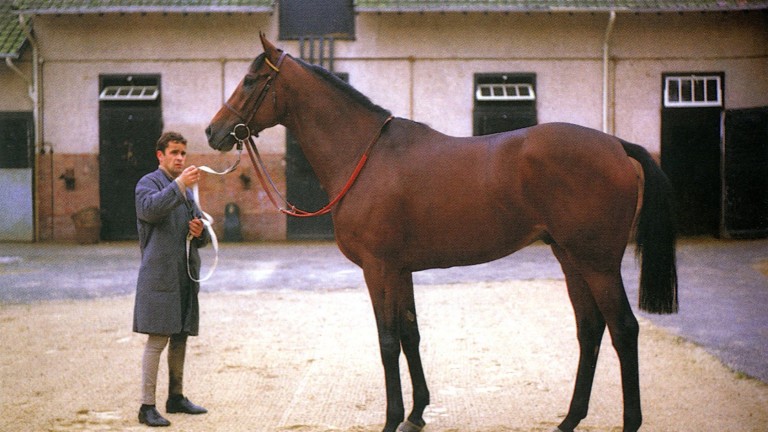 The most sensational and consequential individual transaction in the 250 years of Tattersalls auctions took place at the Newmarket December Sales of 1967. Unlike any such occasion, before or since, it exceeded all expectations in its enactment, yet proved to be just an early highlight in the career of an exceptional thoroughbred.

The subject of all the unprecedented excitement was a two-year-old colt by an underachieving sire, a mid-May foal so backward and unpromising as a yearling that he was omitted from the entries for England’s classic races. His destiny was presumably to find his level in lesser company.

Vaguely Noble came from good stock, bred at the Cleaboy Stud in Westmeath of Lionel Holliday, who had long maintained a large string of horses at Lagrange Stables in Newmarket, and who had a long history of hiring and firing his private trainers on a regular basis. His death, at the age of 85 in December 1965, was the catalyst for all the drama to come.

Holliday’s famous colours – white, maroon hoop and armlets, maroon cap – were transferred to his son Brook, who retained his father’s association with trainer Walter Wharton, and in due course Vaguely Noble was placed in his care. He did not appear on the racecourse until the end of August, when he finished a close second in a six furlong Newcastle maiden. At the Doncaster St Leger meeting he ran second again, beaten three-quarters of a length over seven furlongs.
Vaguely Noble was clearly a promising sort but there was nothing about his form to suggest top-class merit. He was seen in a different light after the seven furlong Sandwich Stakes at Ascot, where he romped home by 12 lengths in a field of 18. That performance indicated that he might be anything, so why not allow him a shot at the nation’s top mile juvenile event, the Observer Gold Cup?

The market for the Doncaster race was headed, remarkably, by the debutant Connaught, who was supposedly catching pigeons at home, while Vaguely Noble attracted some support from 100-8 into 8-1. What we saw was a revelation. Still in the last three turning from home, and seemingly boxed in with nowhere to go two furlongs out, the Holliday colt slipped through a narrow gap, swiftly took command and kept extending his advantage – eventually to seven lengths over the duelling pair Doon and Riboccare.

It was possible that the prevailing soft ground – similar to that he had encountered at Ascot – had been to his advantage, but it still had to be considered an outstanding performance. It surely made him one of the best two-year-olds in the country.

Such an overwhelming victory would have made most owners glow with pride and revel in the triumph, but that was not how Brook Holliday reacted. Churlishly, he declined to be interviewed on television, and forbade Walter Wharton to express his thoughts to camera. All he would tell the representatives of the press was that Vaguely Noble had an engagement in the December Sales, and he would keep it. No, this success was not going to change that plan.

The Observer Gold Cup was run on October 28, and Vaguely Noble’s date in the Park Paddocks ring was scheduled for December 7. The interim was naturally dominated by speculation over how much the colt would fetch and who would buy him. The fact that the colt had no classic engagements – there were no supplementary stages in those days – promised to deter home buyers, but there would surely be serious interest from overseas investors. And it was anybody’s guess how they would value the potential superstar.

The records were checked out, and the press enlightened their readers. The highest auction price for any horse in training was 37,500gns, set by Flying Fox, the previous year’s Triple Crown winner, as long ago as 1900. The highest for any thoroughbred was 47,000gns, set by St Leger and Gold Cup winner Solario in 1932, when he was already established as a successful sire.

Vaguely Noble represented promise rather than celebrity earned through proven accomplished performance. Why would he fetch more than the likes of Flying Fox and Solario? But there was a different scale of values now. A yearling filly, with nothing to flaunt aside from a fancy pedigree, had fetched 36,000gns at Tattersalls only a few weeks ago. A record was surely on the cards.

As the sale date came nearer speculation intensified. The Free Handicap had been published, with Vaguely Noble ranked just 1lb below the designated champion juvenile, unbeaten Petingo. And meanwhile the racing press had been deprived of alternative subjects; the scourge of foot and mouth disease had struck, with the result that all race meetings were cancelled until further notice after November 25. The December Sales were allowed to go ahead, albeit without horses from infected areas, so the catalogue would be much reduced, but the obvious star turn, lot 1044, was cleared for his appearance.

In a normal year the press corps at the December Sales used to consist of just the team from the Press Association, aside from representatives of the Times and the Telegraph, who turned up only for the choice lots. On Vaguely Noble day things were different; there was a substantial prize to be won after we had all chipped in our £1 with our estimate of the colt’s hammer price.

The ring was packed as never before just after 6pm, when Vaguely Noble made his entrance. The last person to find a seat – next to me – was Walter Wharton, but most people were standing, kept upright by those around them. Ken Watt had to plead for caution, fearing a crush that might cause injury or worse, before he could get down to business.

“I have a bid of 80,000gns,” he began, immediately making a nonsense of my estimate. Following the action was not easy, but it seemed that Keith Freeman and the British Bloodstock Agency were active in the early stages. But they were gone once the six-figure mark had been passed amid a general air of disbelief, and thereafter increments of 5,000gns carried things along. I could identify one bidder on the far side – the French agent Albert Neuhat, who traded under the name Godolphin Darley – but his opponent was invisible in the throng occupying the horse entrance. Someone was raising a gold cigarette case, but whose hand held it was impossible to tell.

When Watt asked for a bid of 135,000gns, Neuhat declined, but raised one finger to signify 131. Clive Graham, the Scout of the Daily Express, had predicted that exact amount and was going to win our sweep, but the bidding continued to edge forward. The cigarette case had the final say at 136,000gns, and Watt named the buyer as the Anglo-Irish Agency – an understandable error, as Frank More O’Ferrall was standing next to the actual bidder, Albert Yank, of the Worldwide Bloodstock Agency. The historic transaction, smashing all records, had occupied just two minutes 12 seconds.

In the minutes that followed we gathered information, some of which turned out to be misinformation. The colt was to be trained by Paddy Prendergast for Californians Robert and Wilma Franklyn, we were told. Weeks later we learned that the Franklyns had gone into partnership with Neuhat’s client, Nelson Bunker Hunt, and that the colt would join Etienne Pollet’s stable.

Needless to say, it was widely believed that Vaguely Noble’s price was excessive. He would have to win the Prix de l’Arc de Triomphe to be worth anything like that sum, and that was obviously a tall order.

But it is history now, how, one year on from his sale, the colt had won the Arc, proved himself the world champion of 1968, and been syndicated to stand at Gainesway Farm in Kentucky at a valuation of $5 million. By 1974 he had twice been crowned champion sire in Britain and Ireland.

Was there ever such a bargain at a Tattersalls sale?