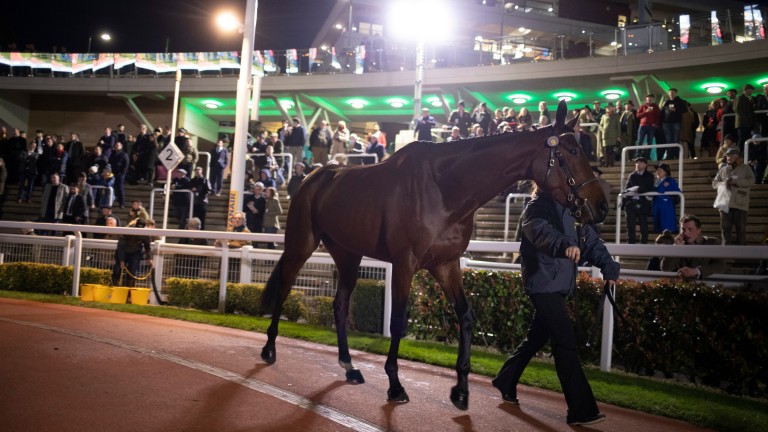 My Whirlwind tops the Tattersalls Cheltenham Festival Sale when knocked down to Nicky Henderson at £400,000
Patrick McCann
1 of 1
UPDATED 10:19AM, JAN 10 2020

Tattersalls' Cheltenham December Sale brought the curtain down on another 12 months of point-to-point trade, and what a spectacle the 2019 round of auctions provided.

In a copybook case of the best being saved for last, the December Sale supplied the highest-priced pointer of the year as Henrietta Knight threw in a stunning £450,000 bid to secure the highly touted four-year-old Gallyhill, an impressive winner of a Kirkistown maiden for rookie trainer Jamie Sloan.

That transaction, one of eight six-figure prices registered at Cheltenham on that Friday evening, sealed a fitting final chapter to a calendar year of point-to-point sales that will be remembered for some soaring highs. 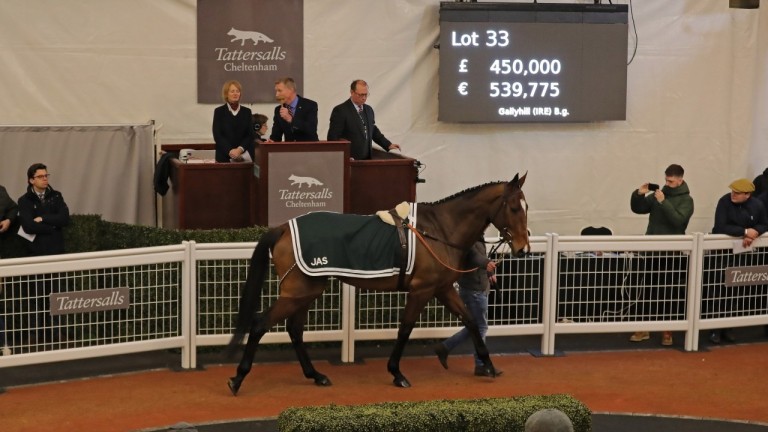 Make no mistake, the price of elite National Hunt prospects is heading in only one direction.

It is easy to understand why buyers feel emboldened to spend such punchy sums on high-class jumps prospects with increasing regularity, as there is a growing sense that when it comes to these uber-pointers, purchasers are getting what they pay for. 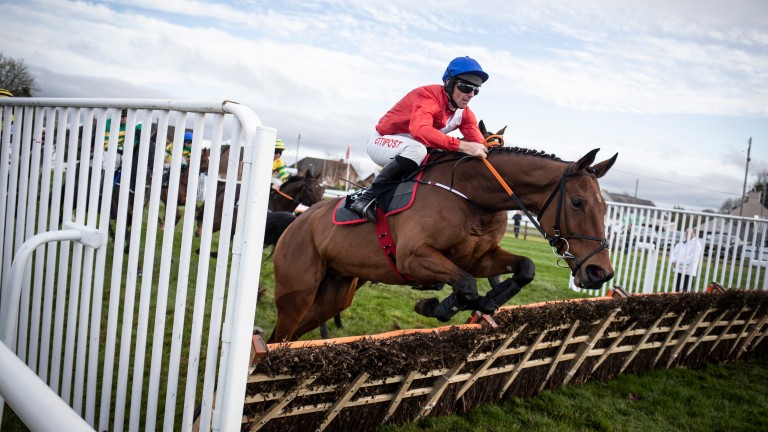 Envoi Allen: will be a warm order to continue his winning run at Naas
Patrick McCann
The sky had also looked the limit for the most expensive pointer of 2018 - the £410,000 Dlauro - prior to him breaking a blood vessel on his hurdling debut.

During Kempton's Christmas meeting, the £260,000 Slate House joined this growing list with victory in the Kauto Star Novices' Chase, while the £275,000 Global Citizen landed the Wayward Lad Novices' Chase

While plenty of those who sold in 2019 are still to debut for their new connections, some headline-grabbing talents are already starting to emerge. The most notable among these at present is The Big Breakaway, who has looked something out of the ordinary with two bloodless successes in novice and maiden hurdle company.

The son of Getaway topped the Goffs Punchestown Sale at €360,000 when sold by Donnchadh Doyle of Monbeg Stables to Colin Tizzard and Ross Doyle. Coincidentally, The Big Breakaway saw off the Goffs UK Aintree Sale-topper Papa Tango Charly, himself a £440,000 buy, when winning a red-hot Newbury event on his most recent outing. 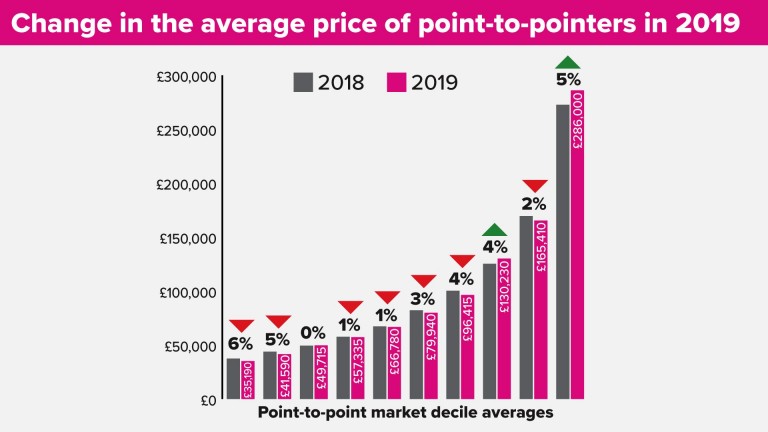 However, detailed market analysis* reveals that selling point-to-pointers is not quite the license to print money that it may seem given the sums highlighted above, with only the uppermost echelons of trade seeing an exponential increase in prices.

While the average price from the top ten per cent of the market saw year-on-year growth of five per cent, up to £286,000, as the accompanying graphic highlights, most other sections of the market went in the opposite direction - albeit the shifts involved are unlikely to have National Hunt speculators hitting the panic button any time soon.

And, despite those marginal decreases away from the highest tier of trade, the average and median price of point-to-point graduates for 2019 still increased, with the former up two per cent year-on-year to £75,870 and the latter up three per cent to £51,500.

That upward trend comes in spite of the fact the number of six-figure pointers actually dropped in 2019, albeit only by one, down to 82 lots. 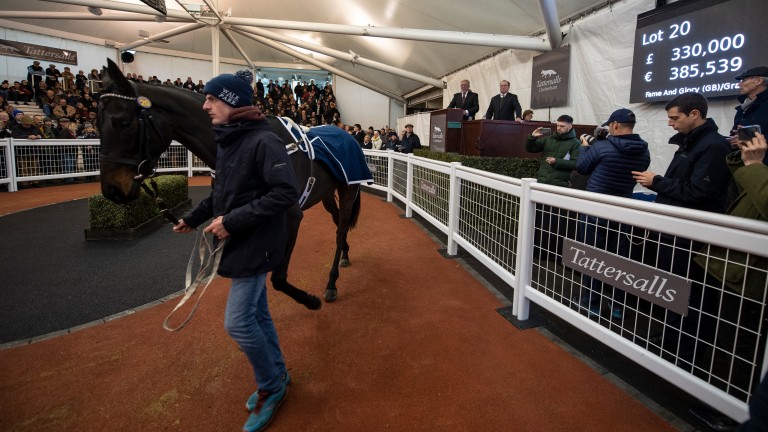 Ballyadam: the £330,000 buy was one of 82 six-figure pointers sold in 2019
Edward Whitaker
Given the rich rewards on offer when a young horse hits the sales ring bullseye of performance, physical and pedigree, it is hard not to think that this year's results will create a positive ripple among the store sales of 2020 and beyond as point-to-point handlers look to restock.

Having sired talents such as Our Conor, Reserve Tank, Jer's Girl and Mister Fisher, it has long been recognised that National Hunt breeders suffered a huge blow when Jeremy passed away in late 2014 aged just 11.

And, with chances to secure his progeny fast running out, buyers have practically been knocking each other out of the way to purchase members of his remaining four- and five-year-old crops. Indeed, no sire supplied more six-figure lots at point-to-point auctions in 2019 than Jeremy, with ten of his sons and daughters having fetched £100,000/€100,000 or more. 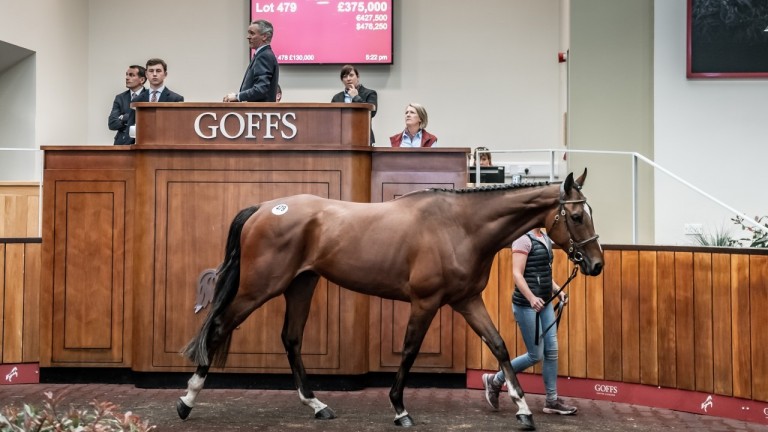 Lets Go Champ: son of Jeremy brings £375,000 at the Goffs UK Spring Sale
Sarah Farnsworth
Those transactions contributed to his final crop of four-year-olds selling at an average of £132,570 - having been bred at just €5,000. Given Jeremy's sky-high popularity, it will be fascinating to see to what extent breeders get behind his son Success Days, who has taken up residency at Kilbarry Lodge Stud ahead of the 2020 covering season.

The late Stowaway, the most prolific sire of six-figure pointers in 2018, had another good year with his final crop of four-year-olds as six of his sons and daughters fetched £100,000/€100,000 or more, including the most expensive filly of the year, the Ballycahane maiden winner My Whirlwind, who topped the Tattersalls Cheltenham Festival Sale for Patrick Turley when bought by Nicky Henderson for £400,000. 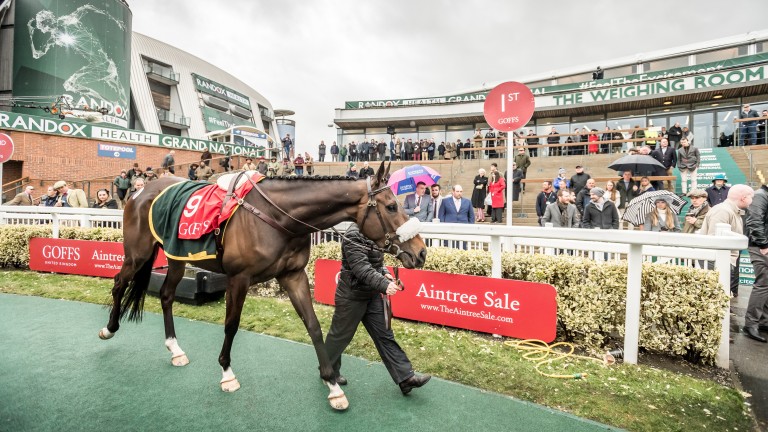 Adrimel: son of Tirwanako checks out hallowed parade ring during the Goffs UK Aintree Sale
Sarah Farnsworth
Those household names are among the 46 different sires who supplied a six-figure pointer in 2019, a diverse list that ranges from champion sires like Flemensfirth to unheralded types such as Frammassone.

Also among the lesser-known names is Tirwanako, who supplied a brace of six-figure lots, including Adrimel, who made a winning rules debut by 26 lengths, having been knocked down to Ed Bailey for £280,000 at the Goffs UK Aintree Sale. Tirwanako rates an interesting addition to the Knockhouse Stud roster for 2020.

As with any valuable commodity, the agents and owners buying point-to-pointers need to have faith in who they are buying from, and this year the market gave Donnchadh Doyle of Monbeg Stables an almighty vote of confidence.

Those who have graduated from his branch of the Monbeg academy include Goffs Punchestown top lot The Big Breakaway, Goffs UK Spring Sale session-topper Lets Go Champ and Bravemansgame, who brought £370,000 at the Cheltenham Festival Sale. 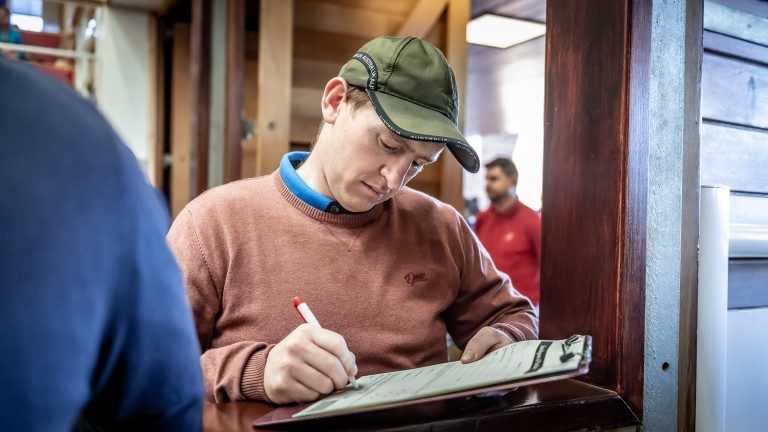 Donnchadh Doyle signs the docket at the Goffs UK Spring Sale
Sarah Farnsworth
Doyle, whose siblings Cormac and Sean also sold pricey pointers from under the Monbeg Stables banner in recent years, has had his talents advertised not only in the sales ring, but, more importantly, on the racecourse too.

Monbeg Dude, Monbeg Notorious, Holywell, The Last Samuri and The Worlds End have all been produced by Doyle before going on to land major prizes. And his next star graduate may be Farouk D'Alene, bought by Mags O'Toole and Gordon Elliott for £260,000 at the Cheltenham Festival Sale, and a winner on his rules debut by 17 lengths on St Stephen's Day.

Given Monbeg Stables signed for 79 stores across the major British and Irish sales in 2019, investing close to £2.8 million/€3.2m in the process, it is inconceivable we won't be hearing much more about Donnchadh and his brothers' production line of winners in the years to come. 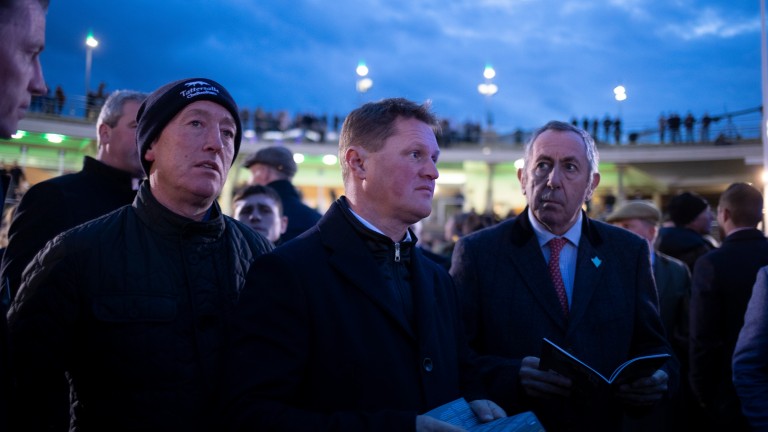 Some younger names also mixed it with the more established operators at the top of the point-to-point market, with Jamie Sloan, Patrick Turley, Ellmarie Holden and Cian Hughes all making a significant impact at sales throughout the year.

From the sad to the strange: six of the biggest surprises in bloodstock in 2019

FIRST PUBLISHED 10:19AM, JAN 10 2020
Make no mistake, the price of elite National Hunt prospects is heading in only one direction