Exciting times ahead as Arrogate signals a new chapter for Juddmonte

Michele MacDonald on a renaissance at Khalid Abdullah's US bloodstock empire 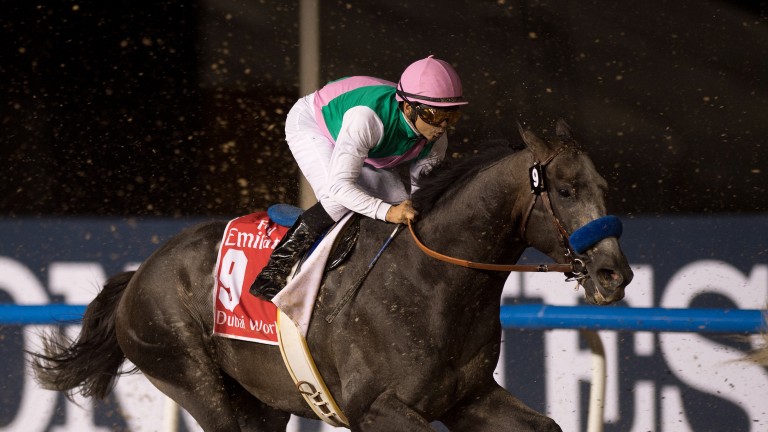 Before covering a single mare, Arrogate has already jumped to a brilliant start in his new career at stud for Juddmonte Farms in Lexington, continuing to spark a dramatic revitalisation of the American branch of Prince Khalid Abdullah’s bloodstock empire.

When Mandy Pope decided to breed her recent $9.5 million acquisition, two-time champion Songbird, to the champion son of Unbridled’s Song, there could not have been a more emphatic endorsement, particularly considering that Pope had thought about choosing Galileo, Tapit or Frankel.

“It’s very exciting and I think it illustrates what people hope and expect from breeding to Arrogate,” says Juddmonte’s American manager Garrett O’Rourke.

“They hope to get what he was when he was a racehorse – his absolute dominance and absolute brilliance.

“There are a lot of people who are submitting Grade 1-calibre mares – speed, dirt mares who will hopefully breed Breeders’ Cup Classic winners and Kentucky Derby winners. That would be the goal.”

Arrogate, ranked as the top racehorse in the world for 2017 due to his stunning triumph in the Dubai World Cup and America’s best
three-year-old in 2016 after his Breeders’ Cup Classic victory, accomplished a great deal in his relatively brief racing career.

Perhaps one of his most striking feats, however, is the renaissance of Juddmonte’s American base.

The farm had not offered a new stallion since homebred First Defence went to stud in 2009 and it had not raced such a high-profile horse on dirt since Empire Maker won the Belmont Stakes in 2003.

With First Defence sold to Saudi Arabia in 2016 and longtime stalwart Mizzen Mast – the only stallion left at the farm until Arrogate’s arrival – about to turn 20, Juddmonte has embarked on a new chapter of its American story.

Arrogate was also the pacesetter for Abdullah’s plan to develop top dirt runners with trainer Bob Baffert, and he was purchased as a yearling for $560,000 at Keeneland from breeder Clearsky Farms.

Massive billboards on main Lexington roads were part of the initiative. The only components on one billboard were “1:59.36” and the words “fastest in 155 years” in bold lettering over a subtle image depicting Arrogate and jockey Mike Smith from their record-setting Travers Stakes win in August 2016.

Another billboard included an image of Arrogate with the amount $17,422,600, representing his record earnings, the most amassed by any horse outside of Japan.

“You have to be competitive with all the other stud farms that are aggressive in their advertising,” O’Rourke says of those efforts.

Juddmonte has also enticed breeders with personal touches in marketing Arrogate, who will command an advertised fee of $75,000, the highest of the new stallions in America for the coming year. When the farm began showing Arrogate soon after he arrived in early November, staff offered visitors a gift bag as well as coffee and shortbread cookies emblazoned with the letter “A”.

While marketing a new stallion isn’t radically different today than it was when First Defence retired, the dynamics have changed somewhat, particularly since fewer mares are being bred overall in the United States.

“You have to become more proactive in reaching out to breeders,” O’Rourke says. “You have to know your clients and make yourself available to your clients – that’s probably the most important aspect.” 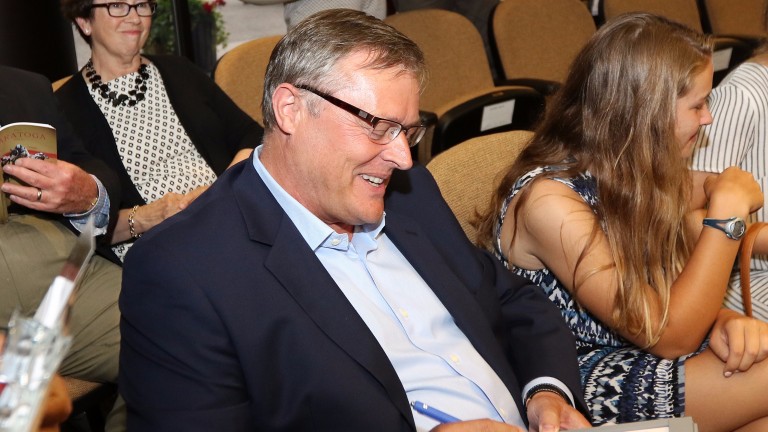 Yet in standing an individual like Arrogate, much of the selling work is done by the horse himself since he proved so exceptional.

“When you have a good product, the beauty of that situation is that an awful lot of clients come to you,” O’Rourke says. “But we never take that for granted. You have to treat your clients well and take care of them.”

As part of the effort to work with breeders, Juddmonte considered their priorities before setting Arrogate’s fee and deciding to limit his book to around 140 mares.

“You have to ask questions of breeders, and you have to have a very good feel of the market by doing comparisons with similar types of horses,” O’Rourke adds.

“The market is strong at the moment, but any time you get over about $50,000 with the fee, that’s a lot of money and you have to have the number of mares in Kentucky to sustain the number of seasons you want to sell. I think everyone has to do their homework in researching how many of those mares are going to be available to stallions when they go to stud.”

Arrogate’s fee is the joint-highest for a new stallion in America over the past decade other than what Coolmore advertised for Triple Crown winner American Pharoah during his first season in 2016. That champion entered stud at $200,000, although Coolmore offered many breeders the chance to acquire two seasons for the price of one.

Previously, champions Curlin and Street Sense began their careers in 2009 and 2008, respectively, with fees of $75,000 before the onset of ramifications from the global recession.

O’Rourke describes Arrogate’s fee as one set “at a very, very fair level” in a recovered economy buoyed by a strong stock market, and he notes that Juddmonte intends to “be very selective on the mares we breed to him, especially in year one”.

Juddmonte put a cap on Arrogate’s initial book as a response to, and an incentive for, commercial breeders.

“It’s what breeders have asked of us. That’s something we’re happy to manage, to keep his book exclusive,” he says.

“I think that helps breeders, especially breeders who are investing a lot of money and have to take a lot of risk in going to the sales. I think it’s something that’s becoming increasingly important to them – that the number of foals these stallions are producing and turning up at the sales don’t make it more difficult for the breeder to sell their product.”

When asked if the days of stallion books of up to 200 mares or more may be waning, O’Rourke says each stallion operation has to weigh up the options. 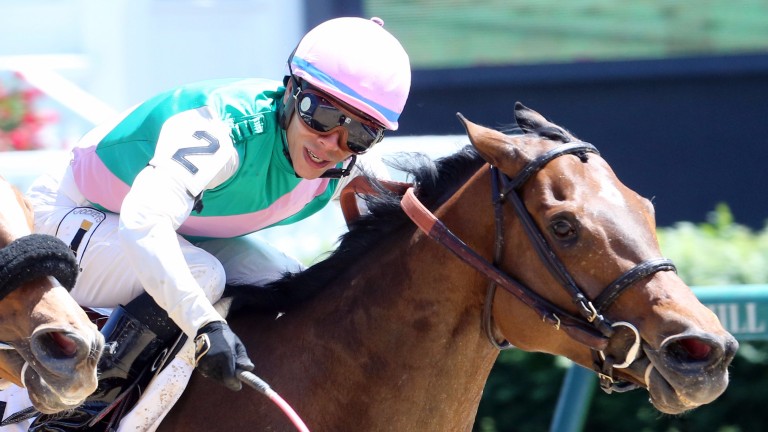 Paulassilverlining: one of the many mares bought by Juddmonte for their new sire
Coady Photography

“You can elect to make as much money as quickly as you can with your stallion – and I don’t knock anyone, from a business point of view, that wants to do that,” he says.

“But if you’re in it for the long haul, like we know we are, and want the stallion to have the absolute best chance of being a success, then I think you get your payment down the road by virtue of the stallion becoming more valuable and their stud fees maintaining their value.”
Juddmonte plans to enhance Arrogate’s chances of success with 15 to 20 of its own high quality mares in his first season.

“We’ve been buying mares of the calibre of Paulassilverlining,” O’Rourke says, referring to the speedy Ghostzapper mare who became a multiple Grade 1 winner and earner of more than $1.5 million following her private acquisition.

Multiple stakes winner Golden Mischief – a daughter of Into Mischief who was a $475,000 buy at the Fasig-Tipton November sale – will also visit Arrogate. Another future mate is Grade 2-placed Jamyson ’n Ginger, a daughter of Bernardini and Canadian champion Ginger Brew who was a private purchase.

Looking ahead, Juddmonte’s vision is that Arrogate can become the next great pillar in the American classic dynasty firmly established under his grandsire Unbridled, from whom have descended the likes of American Pharoah and 2017 Kentucky Derby winner Always Dreaming.

“It’s probably a slightly different type of Thoroughbred and it’s going in its own direction,” O’Rourke says of Unbridled’s line.
As to the characteristics O’Rourke envisions Arrogate bestowing on his offspring, he points first to the horse’s sweeping stride but also notes his kind temperament.

“We all know how brilliant he was, but his pure athleticism is what was tremendously impressive – he was such a smooth-moving horse. He wowed so many people in his workouts, as he did in his races, with that magnificent stride that just devoured ground,” O’Rourke says.

While he hopes other horses in Juddmonte’s dirt racing programme will succeed and eventually stand at the Kentucky farm, for now O’Rourke finds it gratifying to have such a rare individual as Arrogate carrying the banner in America to complement Juddmonte’s European stallion stars led by Frankel and says: “Sometimes you come across horses who are spot-on athletes and they have the right temperament – they have the ability, they have the soundness.

“When they make you feel how different and special they are in everything they do, that’s what makes the great ones so exciting.”

Read more from our special 16-page guide to the new US sires for 2018, headed by Arrogate, Classic Empire and Gun Runner

FIRST PUBLISHED 1:01PM, DEC 18 2017
They hope to get what he was when he was a racehorse – his absolute dominance and absolute brilliance