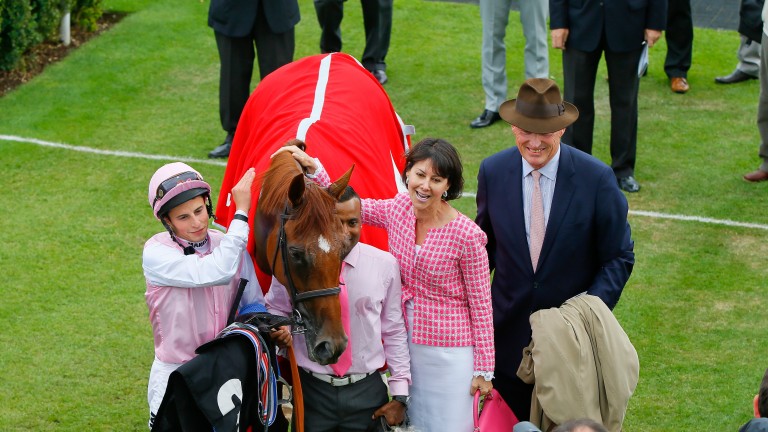 Philippa Cooper’s top-performing broodmare band at Normandie Stud are set for a date with some of Europe’s leading stallions as Cooper switches to a more commercial outlook for her mares.

For the first time in ten years, yearlings from Cooper’s blue-blooded operation were offered at Books 1 and 2 of the Tattersalls October Yearling Sale last year. That return to the ring yielded a significant plus as a Dubawi colt out of Fallen For You was bought by John Ferguson for a joint-sale-best 2.6 million guineas at Book 1.

At the Tattersalls December Mares Sale, Cooper offered a number of her mares for sale as part of an effort to rationalise numbers.

“I’ve got to change my attitude totally. If I want to have really nice fillies and build up my broodmare band then I’ll have to do what everyone else does and sell the good boys. Hopefully, if I can just break even, and I mean break even, that would be amazing.

“Hence when you look at the mating plans, that’s the thinking behind it. It might destroy me, because rather than take the risks I did before I’m now having to be more commercial and thinking of what people want instead of what I want.”

After her second yearling, the Dubawi colt who stole the show at Tattersalls, Coronation Stakes heroine Fallen For You is set for a date with Frankel after she delivers a foal by Dubawi.

Cooper said: “I didn’t want to use Frankel [out of a Danehill mare] originally as there’s very close inbreeding [Fallen For You is by Dansili, by Danehill].

“I’d seen some runners by Frankel who had close inbreeding and hopefully that hasn’t affected them. Her Frankel foal is really nice and I couldn’t see any reason not to repeat it.”

Fallen For You is a daughter of one of Cooper’s matriarchs, the Listed-winning Brief Truce mare Fallen Star, who will return to New Approach as long as she foals safely again this year as she approaches the age of 20.

“Last year she foaled well and this year I’ll wait to see if she foals well again,” said Cooper. “This one could be her last and I’d really love a daughter from her. It’s been a long time since I’ve had a daughter from her, the last one was Fallen For You. Her New Approach colt who sold at the sales last year was the nicest she’s ever had.”

Fallen In Love, a Galileo half-sister to Fallen For You and the dam of Prix de Flore scorer Loving Things, was barren to Golden Horn this year and will now visit Haras de Bonneval’s exciting young sire Siyouni.

Despite not being in foal, Fallen In Love has a Kingman yearling who Cooper says will also be destined for the sales. She said: “She tends not to breed when she’s got a foal, which is what nature intended for them, and she follows that.

“She’ll go early to visit Siyouni. She’s had Loving Things, who is by Pivotal, and it’s a cross that’s worked with the family before.”

Loving Things, a five-year-old daughter of Pivotal, joins her dam at the West Sussex operation having been retired from racing and is one of two mares who Cooper is sending to France’s leading stallion Le Havre.

Wannabe Loved, an eight-year-old daughter of Pivotal out of Wannabe Posh in foal to Kingman, will join Loving Things on the trip across the Channel to be covered by the Haras de la Cauviniere resident.

Cooper said: “Loving Things won in France and I was quite keen to send her to a French stallion. She’s a big Pivotal mare and the danger is he’s quite big, so I’ve got my fingers crossed her first foal won’t be too big.

“The reason I’m sending them both to Le Havre is he has a 90 per cent black type strike-rate with Pivotal mares. I’m not going to say that will happen, but when you’ve got a nick like that it’s worth following.”

Wannabe Posh is another of Cooper’s mares who will be visiting Siyouni after she delivers a foal by the son of Pivotal.

The Listed-winning Soft Centre, a 14-year-old daughter of Zafonic and a half-sister to French Dressing, has had Golden Horn chosen as her next mate after she delivers a foal by Frankel in March.

Soft Centre’s most notable offspring is Nassau Stakes heroine Sultanina, who was one of the blue-blooded mares among Muhaarar’s first book for his first season at Nunnery Stud.

Once she delivers a foal by the four-time Group 1 hero she is set for a date with Darley’s flagship sire Dubawi.

Cooper said: “Sultanina is a Group 1 mare. I wanted to send her to Muhaarar in his first year because I love that Oasis Dream and Green Desert line. I just felt this year she deserved to go to Dubawi and I wanted to up the ante.

“I’m not quite convinced about it but again it was a commercial decision and she’s producing very nice foals. I used Golden Horn last year and there’s a nice cross there with Soft Centre.”

Also set to visit Dubawi is Cooper’s Park Hill Stakes scorer Gretchen, a five-year-old daughter of Galileo out of Dolores, who unfortunately lost her Kingman foal.

Dolores has been one of Cooper’s best-producing mares being responsible for Irish St Leger scorer Duncan and the high-class stayer Samuel. She is also a daughter of one of the operation’s foundation mares in Agnus.

Last year she was booked to visit the Aga Khan’s Dalakhani but was moved instead to Le Havre, who she is in foal to. After she delivers her foal by the sire of dual Classic winners Avenir Certain and La Cressonniere, Cooper will retire Dolores.

She said: “I can’t risk her. I know she’s having a filly and she’s the only mare I’ve had scanned. I don’t scan mares but I scanned her because I knew it was going to be her last one and I was going to sell the Al Kazeem at the sales but I bottled it.

“She has a three-year-old with Luca [Cumani] called Romina and her Al Kazeem two-year-old called Alexana, so hopefully fingers crossed I’ve got plenty to run for her.”

Completing Cooper’s matings are three of her broodmares who will make the trip to Banstead Manor Stud to visit leading miler Kingman and they are Dolores’s daughter Stella Bellissima, who is in foal to Le Havre, Gale Force, a six-year-old daughter of Shirocco, and Deirdre, a ten-year-old daughter of Dubawi out of Dolores.

Both Gale Force and Deirdre are in foal to Frankel and Cooper adds: “Stella’s a lovely mare but she’s a pain to mate as she’s by Sea The Stars, so she’s got Urban Sea in there and that takes away all the Galileo’s. I love Kingman so it will be interesting to see what happens.

“Gale Force and Deirdre are both going to Kingman and I like sending mothers and daughters to stallions together. Gale Force being by Shirocco can go to anyone and it’s probably not a bad idea to put a bit of speed into her.

“With Deirdre I’m just waiting to see if she produces something at the moment, hence why she went to Frankel and is going to Kingman this year.”