Peter Reynolds has overseen the stud for more than 40 years 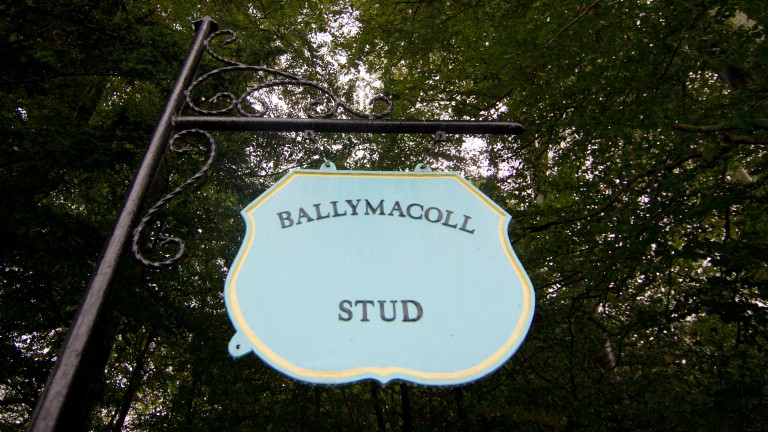 Mating plans for the 20-strong broodmare band at Ballymacoll Stud in County Meath have a more commercial edge this year, as general manager Peter Reynolds prepares to sell the renowned nursery and its bloodstock.

Reynolds has overseen Ballymacoll for more than 40 years on behalf of members of the Weinstock and Sobell families, who have owned the farm for 57 years.

The operation is one of the most distinguished owner-breeders in racing, whose famous pale blue silks have been carried by the likes of Troy, Sun Princess, Pilsudski, Spectrum, Golan, Islington, North Light and Conduit. But it is set to close this year, with the property on the market and set to be auctioned if a private deal cannot be reached.

The prestigious Ballymacoll breeding stock was intended to be sold part and parcel with the farm but may also now go under the hammer, with five fillies set to be offered at next month's Goffs February Sale for starters.

Despite the poignancy of Reynolds appointing stallions to the Ballymacoll mares for the last time, he insisted it was business as usual.

“I'm carrying on as we have done in the past and working them out,” he said. “If we're going to sell these mares I need them to be well covered; there's no point in devaluing them by going to cheaper stallions.

“We've got some interesting covers this year. We need to get some more speed in, so we're using Dark Angel twice, Acclamation and Invincible Spirit."

Dark Angel's sire Acclamation has been chosen for Drama Class, the Listed-placed dam of Centred and Eleanora Duse, while Invincible Spirit will be the first suitor for Angel Vision, a winning sister to Canonbury.

Angel Vision and Canonbury are among ten fillies from ten foals produced by Islington, winner of the Breeders' Cup Filly and Mare Turf and two renewals of the Yorkshire Oaks. The 18-year-old daughter of Sadler's Wells and Yorkshire Oaks winner Hellenic is in foal to Oasis Dream again and is booked in for Kingman.

Despite the prospect of a remarkable 11th filly on the trot, Reynolds reported he was resisting curiosity and not having the foal sexed in-utero.

“We did it once and the guy got it wrong,” he said. “It was Hellenic – the foal she was carrying was sexed as a colt, but it turned out to be the filly who became Justlookdontouch. We'll take what foals come.”

The unraced Justlookdontouch ranks as one of the most exciting young Ballymacoll mares, having produced last year's Lord Weinstock Memorial Stakes and Galtres Stakes winner Abingdon as her first foal. She has taken after three-parts sister Islington by producing only fillies to date and has a two-year-old by Leroidesanimaux and a Kingman foal. She is in foal to Kingman and visits Sea The Stars this year.

La Divina, another sister to Islington, produced four fillies before delivering a colt by Shamardal last year. She is in foal to Lawman and will return to that sire.

Another sign of Ballymacoll appealing to the market with sales in mind is the number of new stallions chosen for the broodmare band.

Musidora Stakes winner Liber Nauticus goes from Derby winner to Derby winner, as she is in foal to Golden Horn and is booked into Harzand.

“After all, our aim has always been to breed Derby winners,” Reynolds reflected on the mating.

Eleanora Duse, who also finished third in the Yorkshire Oaks, has a date with the most talked about stallion in the world right now: Frankel.

“The mare has been very unlucky as her first two produce have had accidents - one died at birth, another had a problem with his tendon and may come back to race,” Reynolds said. “It's a disastrous start for a young mare but I'm convinced she's going to produce something. She's in foal to a good horse in Gleneagles and you can't do better than Frankel.”

Another notable Ballymacoll mare, Desert Bloom, will be covered by Teofilo. The 17-year-old daughter of Pilsudski is the dam of Melbourne Cup winner Fiorente.

Reynolds noted “the Australian market has been good to us” and the resultant foal by Teofilo, sire of Antipodean Group 1 winners Kermadec, Palentino and Sonntag, should hold appeal to owners and trainers there.

Reynolds confirmed that the plan was still to close down the stud within the year, with a decision on how to proceed to be made in mid-February if a sale has not been agreed by then. He added that, bar the Goffs fillies, the procedure for dispersing the bloodstock had not been finalised.

Adjusting to life after Ballymacoll might be hard after a lifetime spent at the stud, which has produced 30 Group 1 winners and achieved worldwide fame, but Reynolds said he was not fazed by retirement and would still have bloodstock of his own.

His one regret, though, is the uncertainty for his staff.

“What makes me feel bad about the whole thing is the staff,” he said. “They're the best I've had in 40 years and they're very good - young and loyal. They've stuck with me throughout the sale, still working away.

“To have staff like I have is amazing in this day and age.”

FIRST PUBLISHED 6:00PM, JAN 17 2017
If we're going to sell these mares I need them to be well covered; there's no point in devaluing them by going to cheaper stallions