"More breeders should sign up to the Plus 10 bonus scheme" 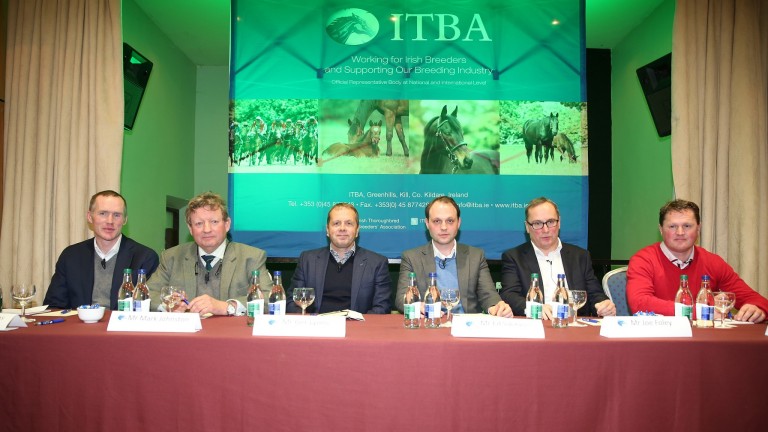 What are your thoughts on breeze-up sales?

Mark Johnston, trainer: My very first winner was bought at a breeze-up and in the early days I tended to recommend to new owners to buy at the breeze-ups as usually there was a quick return. At least you would have a runner soon.

But I stopped going when they started running the horses singly and some people could time then and others couldn't, so there wasn't a level playing field with information. I went back the year before last and it was a good introduction as they are using times, but I would prefer if there were official timings. I'm back giving the old advice to new owners now.

Ger Lyons, trainer: I hate breeze-ups. Everything about them is wrong and yet I have great success with horses from them. I love training two-year-olds but it is very different to prepare a horse for a breeze-up sale. The guy with the breeze-ups has only one date to aim for whereas we have an entire season. It suits some horses and it doesn't suit others. There are far too many of them now. Goresbridge came on stream and they do a very good job. I would prefer if it were just Doncaster, Newmarket and Goresbridge.

Ed Sackville, bloodstock agent: I prefer to buy horses from yearling sales, there is more on offer and you have much greater choice. As well as that, when you buy from a yearling sale you have much greater control over the horse's destiny. Trainers can start from scratch with a yearling, whereas I've seen horses bought from breeze-ups that need to be turned out in a paddock for a couple of months afterwards to get over it.

Joe Foley, Ballyhane Stud: I love buying foals at the sales but I bought a Group 1 winner at a breeze-up sale. In the end, I prefer buying yearlings.

Colin Bowe, trainer: No. Breeze-ups don't work in National Hunt racing unless you have a buyer lined up for the horse already. I have a Shantou gelding, so he is by a popular sire, a half-brother to Line Ball, and he wasn't sold at a breeze-up last year.

What one thing do you think should be done to improve racing?

Damian Burns, Lodge Park Stud: More breeders should sign up to the Plus 10 bonus scheme. It will pay for itself in the sales ring and beyond, if you do your job properly.

Mark Johnston: It's all about prize-money. The authorities have made great strides with betting and are taking steps in the right direction but owners need to see some return.

I'm not one for bureaucracy but there needs to be more central control especially when it comes to fixtures and prize-money. We need a benign dictator, like Bernie Ecclestone, to step in and take control.

Ger Lyons: I don't get involved in politics. This is a fantastic sport that we are involved in but people are too worried about getting new people through the gate. They need to concentrate on the person who is already in the gate and look after them. I would love if breeders all paid the Plus 10 registration as it is a huge help to owners, and helps breeders in the sales ring.

Ed Sackville: It makes a difference when I am on the phone, bidding for a horse in the ring for someone. If it is registered for the Plus 10 bonus it usually means the bidder is willing to place that one extra bid, knowing the horse can earn that extra £10,000.

That brings a higher price for the breeder so it is of benefit to them to register their foals. Also, I would like to see one unified body for racing so that on key issues, everybody is singing off the same hymn sheet across the world.

Colin Bowe: I would like to see races introduced for horses by sires that didn't cost more than €10,000 or a figure like that, maybe a maiden hurdle. It would give the smaller lads a chance.

Which is more important - mare or stallion - when looking at a horse to buy?

Damian Burns: It's all about the mare. You can see it in the mare if she is getting old - you can have an old mare at 12 and a 20-year- old mare who is as fresh as paint. You can get old mares' foals out of ‘younger' mares and magnificent beasts out of old mares so I have no problem buying them.

Horses at stud are probably all rated between 105 and 130 pounds so the spread of ability between stallions is only 20 - 25 pounds. With mares there can be up to 70 pound spread but the mare contributes half of the genes so with the stallions rated much more similarly, the spread of ability in mares is a lot greater which is why the mare is more important.

Mark Johnston: Genetically it is 50-50 but with larger stallion books less than one per cent of the male population is passing on their genes. For the thoroughbred horse population to remain static you need 40-50 per cent of mares being retained to breed but I think the retention figures are between 70 and 80 per cent.

The difference between the best and worst mares are vast. I need the mare to be a good racemare or have produced horses rated over 90. Unless you've got that, it is cheaper to buy yearlings that produce them.

Ger Lyons: The mare carries it for me. I won't touch anything out of an old mare. I prefer a mare who has done it on the track and if she has thrown three, four or five foals that have done nothing, I strike her off my list. There are exceptions to every rule but that's my preference.

Ed Sackville: It entirely depends on what the client is trying to achieve. Each case is truly individual but there are certain things I don't do. I won't touch a horse by a sire who is known to have very bad wind and I don't like a horse with a very weak pedigree. There are no set rules and you get incredibly good horses with poor pedigrees.

Joe Foley: It comes down to budget and ambition for the mare. She needs to have pedigree, performance and conformation. Ideally you would have a good race filly with a good pedigree who looks like a beauty. I like fillies who have won, but you look at Beatrix Potter, the dam of Harry Angel. She never won a race but her first foal won the Mill Reef. I hate bad looking mares, I don't like offset knees and I hate bad-tempered mares. I also love broodmare sires.

Colin Bowe: I am a big fan of stallions, I would go for the sire more so than the dam. A horse out of an unraced dam wouldn't be a problem for me but they need to have a bit of blacktype in the pedigree, it needs to be related to something, it can be a young pedigree, even something under the second dam. If I'm buying a filly she needs to have a strong pedigree, she has to be a big filly - around 16.2 - and she needs a bit of bone.

Damian Burns: In the past I would have said ‘don't touch them' but we are using a few of them on 12 and 13-year-old mares that have done alright, and bred decent horses.

I would be quite shy about going to these stallions with a young mare. You have to choose your move carefully as 30 per cent of the catalogue at least will be by first-season sires and you will be okay if you have a good looking one. First season sires will get good horses all you have to do is look at the two-year-old leading sires list. Four out of the top ten will be first season sires but they won't all be there next year, so they are capable of getting a good horse in the first crop or two.

Analysis done by a student in the University of Limerick of successful stallions actually showed that as the stud fee increased, the amount of stakes winners decreased. The difference was enough to be statistically significant. It was only one study. Shy Groom was champion first-season sire in Sadler's Wells' first year so first-season sires are capable of breeding a good horse or two early on.

Mark Johnston: The stallion has to be a Group 1 winner. He is not proven in the breeding shed so he has to be well and truly proven on the track. It is the same for mares, I'm not one for buying unproven stock. Usually I can't afford the first season sires but I prefer the more long in the tooth proven stallion who has got top class racehorses.

Ger Lyons: At the sales, I buy what I am allowed to buy and lucky for me it has worked in the past. If the stallion is only a Listed or Group 3 winner then the yearling goes to the back of the queue.

Ed Sackville: Really it is the individual that I am most interested in but ideally I would like the sire to be as good a racehorse as possible. It comes down to what you can afford.

Joe Foley: I think an awful lot before buying a stallion. I like speedy horses but that doesn't mean they are necessarily sprinters. You get middle-distance horses with speed. Galileo was a very fast horse, you could see it in his action that he had speed and he is a brilliant stallion. I hate this term ‘cheap speed'.

Ireland is not a wealthy country full of wealthy people who can afford to breed to expensive stallions. Most breeders are trying to stay solvent and remain in business. I wasn't afraid to buy Battle Of Marengo who was a 7f winner at two and a good 1m2f horse at three and he has got nice stock.

Colin Bowe: There are a lot of very well bred stallions in Ireland now. We have lost Oscar and Flemensfirth but there are nice young stallions to choose from. I am a big fan of Getaway and Ask is getting nice stock. Everything is about reputation. The stallion only has five or six years to produce something before he goes off the radar, he has to get a Grade 1 horse quickly. In the ring you get more money for a young stallion or a Grade 1 stallion.

Mark Johnston: Epaulette. We have five by him, the most of any first season sire in our string and they are nice. He is an obvious one to have early runners but I also have three Intellos and it has been a pleasant surprise that they are going so well.

Ed Sackville: Camelot was an exceptional racehorse and I loved his yearlings. Red Jazz was very good value at €4,000 and he had nice looking yearlings.

Joe Foley: I think Lethal Force will do well and I have a sneaky feeling about Dabirsim. He is a nice horse.

Colin Bowe: Getaway. He has the favourite for the Champion Bumper (Getabird, produced by Bowe and sold to Willie Mullins for €200,000) He has some exciting horses to come from not very large numbers.

FIRST PUBLISHED 4:33PM, FEB 4 2017
If it is registered for the Plus 10 bonus it usually means the bidder is willing to place that one extra bid, knowing the horse can earn that extra £10,000