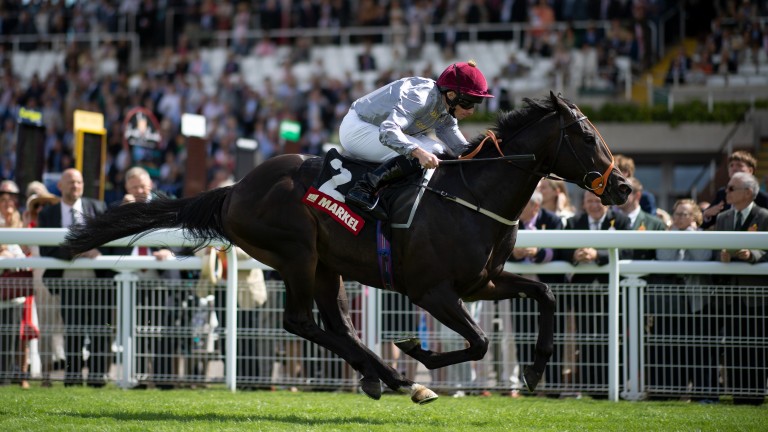 Armor and Ryan Moore winning the Molecomb Stakes at Goodwood in the summer
Edward Whitaker (racingpost.com/photos)
1 of 1
By Tom Peacock 3:30PM, NOV 12 2021

Al Shaqab Racing's juvenile Armor has been retired from the track to stand at the operation's Haras de Bouquetot in France.

The son of No Nay Never might have raced for a sole season but he was certainly busy, with a win in the Group 3 Molecomb Stakes at Goodwood being the highlight.

Trained by Richard Hannon, he also won a Doncaster maiden, took fourth behind Perfect Power in the Prix Morny, ran second in the Flying Childers Stakes and third again to Perfect Power in the Middle Park. An appearance in the Breeders' Cup Juvenile Turf Sprint, where he was beaten just two lengths, proved to be Armor's swansong.

Al Shaqab general manager Khalifa Al Attiya said: "As one of our most consistent two-year-olds at Al Shaqab, Armor is showing a similar profile to Mehmas, with whom we’ve enjoyed great successes while retiring him in Ireland.

"We’d like to offer a similar opportunity to the French breeders, so Armor will now start a new exciting career at Haras de Bouquetot."

Armor, who was bought by Al Shaqab for €55,000 last October, will be standing at a fee of €5,000 and will be available for viewing at his new home during the Arqana December Sales.

"A fast and precocious horse of 1m 59cm (15.3hh) Armor has shown an amazing turn of foot and great consistency in his performances.

"We are confident that with his profile, not dissimilar to another Al Shaqab stallion in Mehmas, he will prove an attractive sort to the European market.”

Hannon said: “Armor was a very precocious two-year-old who had it all - natural speed, toughness and a great turn of foot. And he's a gentleman.”

FIRST PUBLISHED 3:30PM, NOV 12 2021
Armor is showing a similar profile to Mehmas, with whom we’ve enjoyed great successes while retiring him in Ireland