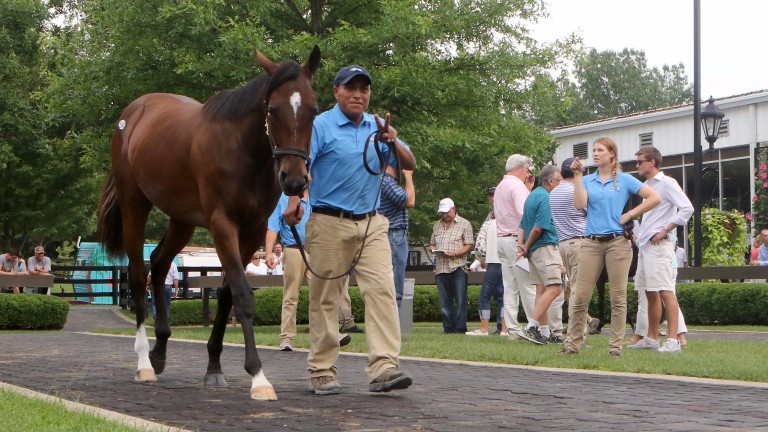 The Medaglia D'Oro filly knocked down to Oxo Equine for $1 million
Fasig-Tipton Photo
1 of 1
By Ron Mitchell of the Blood-horse 2:17AM, JUL 12 2017

Best, the enigmatic former executive with Boston Scientific who buys under the OXO Equine banner, made his first thoroughbred purchases at last year's Keeneland September yearling sale and was this year's leading buyer of two-year-olds in training with four bought for a total of $4.75 million.

Best patiently waited Monday until hip 290, a February-foaled yearling consigned by Bluewater Sales as agent, entered the ring. It was obvious from the outset that the filly was going to top the sale, as bidding escalated quickly until Best, sitting inside the sale pavilion, emerged on top.

"I just try to review as many horses as I can and when one strikes me as special I consider it seriously," Best said of his interest in the filly, the only horse on which he bid during the auction. "I just pick the horse I want to own; the market determines the value. It was the horse I was most interested in and it was high in the range of what I wanted to pay."

Best, who now owns seven horses, said he has five in training with Jerry Hollendorfer and Chad Brown that will begin to represent him on the track soon.

Bluewater's Meg Levy almost seemed stunned by the price, which was the highest at the sale since a Forestry colt was sold for $1.2m in 2006 and was the highest for a filly at the auction since 1982, when a Northern Dancer filly brought $1m.

"My highest hopes were not even close to that price," Levy said. "We brought her in here thinking her sire power and precocious athletic physical would make her a standout here. Being the first yearling sale of the year, I thought she might bring $600,000 or so if we had the right folks, but that [price] was beyond my wildest expectations for sure."

The first foal out of the stakes-winning Malibu Moon mare Hung The Moon, the filly was bred in Kentucky by Southern Equine Stables. Hung the Moon was purchased by Bluewater, as agent, for $280,000 while carrying the Medaglia D'Oro filly from the Elm Tree Farm consignment to the 2015 Keeneland November breeding stock sale.

Competitive bidding by a broad biding base comprised of end-users and pinhookers on a typically hot, humid Kentucky July day pushed numbers above those of the 2016 venue.

"Obviously it was a very, very good day," said an ebullient Fasig-Tipton president Boyd Browning. "Average was up, gross was up, median was up, and the RNA rate was down. Boom! 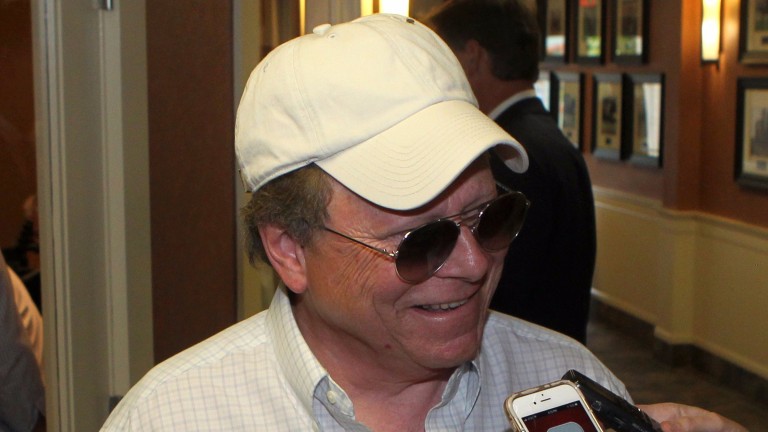 Larry Best: bid on just one yearling at the sale and got his girl
Fasig-Tipton Photo

"You are always pleased the statistics reflect positively on those trends and you're always thrilled to have a horse break out and get through the glass ceiling like the filly did late today.

"It just demonstrates the strength of the market and if you put good horses in front of quality buyers that anything can happen. I think it should give everyone in the marketplace some confidence for the upcoming yearling sales."

Despite the seven-figure filly and the overall positive results, Browning said it remains a selective market.

"There is still some selectivity in the marketplace as we have seen in recent years," the executive said. "So you had better have a pretty good feel of the quality of horse you've got, you had better be realistic in assessing its pedigree, its vetting, and its physical conformation, and have a really good idea who's involved on your horse."

The sale's second-highest price was the $310,000 paid by trainer Kenny McPeek on behalf of Paul Fireman's Fern Circle Stable for an Orb colt (hip 194) from the consignment of Gainesway, agent.

The product of a solid Claiborne Farm female family, the colt is out of an Arch mare who recorded five wins and earned $112,358 while racing in Canada. Bred in Kentucky by Heather M Takahashi, the colt had been purchased for $55,000 by Blue Sky Stables at this year's Keeneland January mixed sale.

"It was more than I thought," McPeek said of the purchase price. "I really felt like he was around $200,000, but he was really an exceptionally well-made individual and a horse that had a lot of energy and was very well-balanced."

McPeek said he had purchased yearlings in all price ranges Tuesday and labelled the market "solid".

Consigned by Paramount Sales as Hip 235, the bay colt was bred in Kentucky by the partnership of Gabriel Duignan, Bruce Pieratt, Patsy Pieratt, Patrick Costello, and Petaluma.

"We were just waiting for this colt," said Randy Hartley. "We thought he was the best horse in the sale. For an Into Mischief, he was a good size, really correct. He had the whole package for what we were looking for here. It's a lot of money. He has to do everything right and if he does he will do well."

Although he and his partners had been mostly outbid on the horses they wanted at Fasig-Tipton, Hartley said he did not mind because a strong market bodes well for the industry going forward.

"You never want to buy in a bad market so you have to pay for a good horse," the horseman said. "We have done really well out of this sale. We are just trying to buy really nice individuals. If they're good now they'll be good down the road.

Among first-crop sires, Airdrie Stud's Cairo Prince had eight yearlings sold from as many offered for an average of $141,875.

FIRST PUBLISHED 2:09AM, JUL 12 2017
I just pick the horse I want to own; the market determines the value