Midday strikes as daughter Mori gets off the mark at Ascot

Juddmonte homebred is another three-year-old winner for Frankel 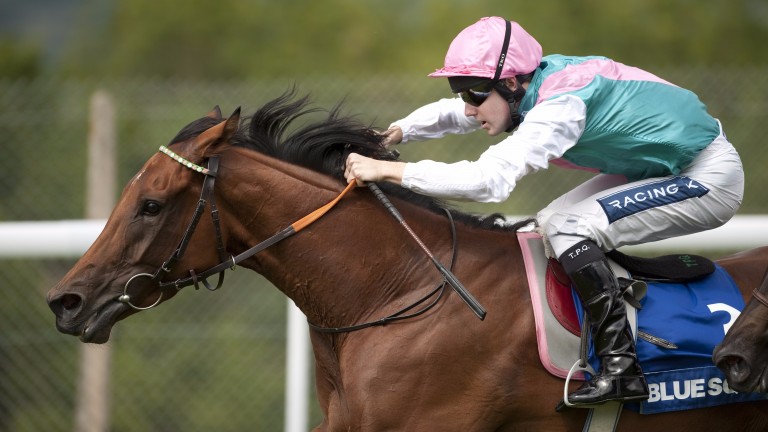 Midday: two winners from first two foals after the victory of Mori
Edward Whitaker
1 of 1
By Martin Stevens 7:37PM, MAY 12 2017

There will not have been many better-bred horses running anywhere in Europe on Friday than Mori, who was bidding to get off the mark at the second attempt in a 1m2f maiden at Ascot.

With an encouraging debut run to back up her outstanding pedigree she was sent off 5-4 favourite and duly won by one and three-quarter lengths from Glittering Jewel (by Bernardini), with the pair pulling seven lengths clear of the third.

The three-year-old filly, trained by Sir Michael Stoute, is a true Juddmonte homebred.

She is from the much talked about first crop of Khalid Abdullah's unbeaten dual world champion Frankel, who has sired eight stakes winners and counting.

Mori is the second foal produced by her dam Midday, a daughter of Juddmonte's champion two-year-old and sprinter Oasis Dream who won six Group 1 races including three editions of the Nassau Stakes and Breeders' Cup Filly & Mare Turf. She also finished second to colts in the Coronation Cup and Juddmonte International.

Midday's first foal, the Galileo colt Midterm, won the Group 3 Classic Trial at Sandown and finished second in the Prix Niel last year. He was a non-runner in the Ormonde Stakes at Chester earlier on Friday.

Midday is a half-sister to Nell Gwyn Stakes winner Hot Snap and Australian Listed scorer Midsummer Sun out of a Listed-placed half-sister to Group 1 winners Elmaamul and Reams Of Verse.

As well as Mori – who holds an entry in the Ribblesdale Stakes – Midday has also produced a two-year-old colt by Frankel called Midi, a yearling filly by Frankel and a filly foal by Galileo.