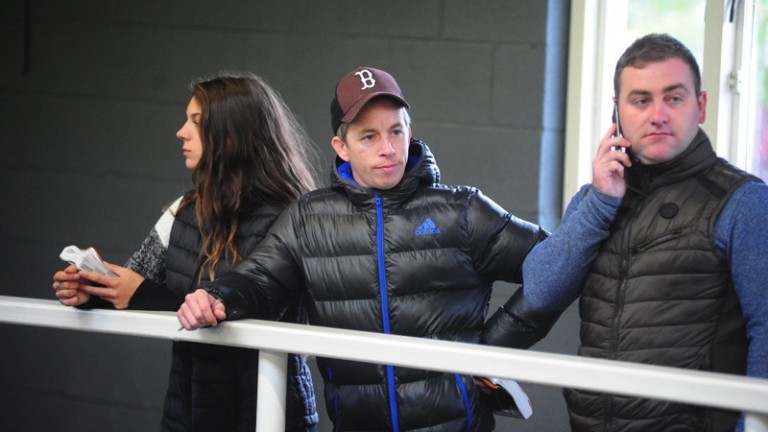 When breeze-up consignors selected their yearlings for resale in the autumn of 2019 their money was invested at a time when the world looked very different.

Consignors upped their spending to improve the quality of their offerings, too – justifiably so after the successful year breeze-up graduates had enjoyed.

The usual stream of Group 1 performers were added to the breeze-up roll of honour but the sector broke new ground when War Of Will, a €250,000 Arqana Breeze-Up graduate sold by Norman Williamson’s Oak Tree Farm, won the Preakness Stakes, the second leg of the US Triple Crown.

It is, therefore, most unfortunate that the global coronavirus pandemic has shut down the economy and most of the world’s racing, halting the momentum of the breeze-ups.

The current climate hasn’t made life easy for Micky Cleere, who has taken the plunge into setting up his own breeze-up venture, MC Thoroughbreds.

Although aware of the current adverse economic conditions, Cleere is maintaining some perspective in the fight against Covid-19, which has claimed the lives of nearly 300,000 people worldwide.

“It’s my first year on my own so hopefully it works out,” the County Tipperary-based pinhooker says. “It’s a bit of a tough year but what do you do? People’s lives are more important.”

The breeze-up industry is in many ways about precision. Much of the horse’s value rests upon how it goes through a couple of furlongs at an unfamiliar venue with time, action and demeanour all taken into account.

The sale of a breezer rests upon a lot of things going right and there is little margin for error, never mind margin for a slump in the economy. Now, vendors need racing to return in Britain and Ireland to stimulate some sort of demand.

Racing is the catalyst for bloodstock transactions. Without racing, owners can’t collect prize-money or sell their horse, while stallions and mares alike can’t show their credentials.

Unlike other industries, racing operates on a crop-to-crop basis which won’t make it easy to re-open logistically. The cycle has been broken.

However, Cleere is remaining optimistic for this year’s juveniles, pointing out that there will be ample opportunities for early types to make up for the lost spring.

“We do have a few early types ready to rock," he says. "Hopefully, we can find homes for them and, after all, the year isn't over yet. There are always going to be five-furlong races throughout the year in Britain, Ireland and France.

“If racing started back soon it’d be better for everyone, though. People wouldn’t be worrying as much and then they would start shopping again.”

Racing did return to France on Monday and the breeze-up graduates instantly made their mark. Tropbeau confirmed herself the horse to beat in the Poule d’Essai des Pouliches with a win in the Prix de la Grotte. She was sold for €180,000 at the Arqana Breeze-Up Sale, by Willie Browne’s Mocklershill to Charlie Gordon-Watson.

Cleere has long played a big part in the breeze-ups by riding horses for different consignors. A successful apprentice for David Wachman, he rode 42 winners in Ireland including in the famous Magnier, Tabor and Smith silks of Coolmore. While race-riding he also gained a solid grounding in how to prepare breezers and precocious juveniles through other trainers he rode for.

“I started with point-to-point trainer Aidan Kennedy, who taught me everything at the start and how to ride properly," he says. "Then I was apprenticed to David Wachman and I also rode for people such as Thomond O’Mara, Con Marnane, Andy Slattery and Liam McAteer, who were all based around the Tipperary area.

"They were very sharp two-year-old men, and very good horsemen in general. It was a good learning curve around there.

“I always rode at the breeze-ups, even when I was riding. I juggled the two, a bit like Rory Cleary and Mick Hussey are doing now. I also rode in America a few times. I always wanted to go out to America and ride in races and I rode at Delaware Park for a few different trainers there, which was a great experience.

"I came back and got straight into the breeze-ups. In fact, I was supposed to go back out to the states as I had a sponsor but then I got the offer of preparing the Star Bloodstock horses.”

The tech-savvy Star Bloodstock operation involves the analysis of data-modelling in its purchasing decisions – a unique method to purchasing bloodstock that Cleere was glad to have gained a glimpse of.

“They bring more into the mix than the normal buyer – it’s different from just standard horsemanship,” says Cleere. “I did four seasons there and it was a great experience. It was good working with Matt Eves and Byron Rogers. Byron is a great judge of a horse. He has his certain type of horse and he’s very good at picking them, so it was great to learn what he looks for.”

Time spent in both racing and breeze-up yards has helped tailor Cleere’s approach in balancing a breeze to attract buyers whilst keeping a lid on them so they can withstand the rigours of training.

“My approach is to get them ready, make them good rides and get their heads right," he explains. "A lot of horses go through the breeze-up preparation and while some take it, some don’t – just like when they go to trainers.

"Obviously, we need to work them enough to do a nice breeze but my aim is to keep them happy and feed them well.

“We give them a lot of steady work to build them up. We start off swinging them and then we just work them over the four furlongs, building up the whole way. I think that's better for them, that way you’re not tearing at them to do the two.”

Travel restrictions prompted by the coronavirus pandemic have meant Cleere, like many other consignors, has had to increase his digital marketing.

Instead of the prospective buyer coming to view the horse, Cleere has tried to bring the horse to the buyer as best he can online, which could pave the way for new marketing standards in the industry.

“It’s been very different for a lot of vendors,” he says. “We’ve had to do things that we didn’t do as much before. It’s brought a new way to help sell horses, which won’t do any harm and we could end up doing more of it in the future.”

It is also one of the few operations with a recent pedigree boost for its lots due to the shutdown.

Thankfully for Cleere, Hong Kong racing has carried on behind closed doors, as Beauty Amigo (formerly Brother Bear when trained in Ireland) added a lucrative handicap at Happy Valley to his two Listed wins. He purchased his Gleneagles half-brother at Book 2 of the Tattersalls October Yearling Sale.

“There’s a few there that I really like this year," says Cleere. "We’ve got a timely pedigree boost for our Gleneagles, who we like. We’ve also got a lovely Acclamation and a No Nay Never.

"We’ve a Coulsty, Dandy Man, Prince Of Lir and Ajaya, who all look pretty quick, smart and straightforward among others. Thankfully, there’s plenty in this year’s bunch that I like.”

Amid the hardship that many businesses are experiencing, the pandemic has shown how much people are willing to help and pull together, to which Cleere has been hugely appreciative of.

“I’ve got a great team of staff," he says. "Mick O’Dwyer and my girlfriend Oceane Vuylsteker are a big part of the team and I couldn’t do it without them. Gerry Corcoran and Paul Cody are also a huge help. It’s a game I love and I’m working with some great people.”

The hope for Cleere is that MC Thoroughbreds will get through this year’s breeze-ups with new homes for his lots and funds to go again, like the rest of the breeze-up consignors.

Food for thought is that with so much uncertainty in the world right now, buying a breezer could be a safer venture into ownership, as Cleere points out.

“Buyers are getting to see what they have at the breeze-up sales," he says. "At the yearling sales, it’s more of a guess and we’re taking a bit of that guesswork out of it.”

Waldlerche hails from a German family flourishing with remarkable vigour

FIRST PUBLISHED 6:52PM, MAY 14 2020
Obviously, we need to work them enough to do a nice breeze but my aim is to keep them happy and feed them well