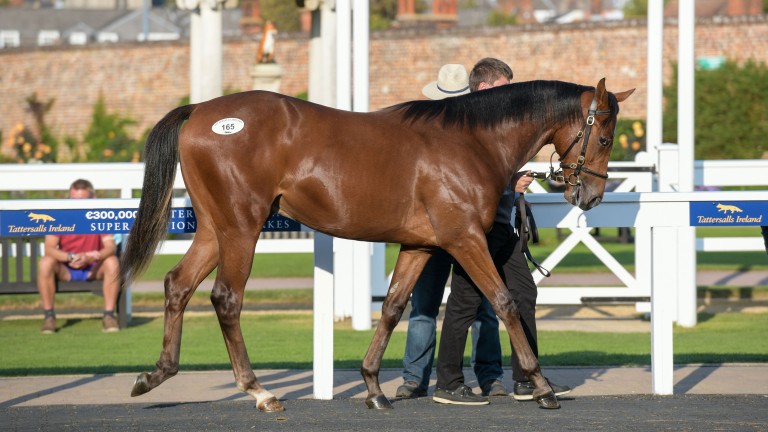 A brother to unbeaten Acomb Stakes winner Gear Up set a Tattersalls Ireland September Yearling Sale record on Monday, when the Hong Kong Jockey Club's Mick Kinane went to £325,000 for the son of Teofilo, who was bred by Jim Bolger and offered by his granddaughter Clare Manning of Boherguy Stud.

Given the challenging market conditions that have prevailed across the key early dates of the yearling sales season, it would have been a bold shout to have predicted record-breaking transactions, but auctioneer Edmond Mahony's assertion the colt was "something a bit special" proved prescient.

Kinane, stationed outside by the holding pen, locked horns with agent Alex Elliott, who was joined in the third tier of the bidders' area by Ralph Beckett and football agent Kia Joorabchian, whose horses run under the Amo Racing banner.

A protracted battle ensued as the rival camps batted increasingly pricey bids back and forth from an opening offer of £50,000.

No quarter was given until Mahony's gavel was raised soon after Kinane pushed the price to £300,000.

After a period of deliberation Elliott mustered another wave of his Ipad, but when that raise was almost instantly bested it became clear Kinane did not intend to back down, and after a final exchange of £5,000 increases, the Hong Kong Jockey Club man won out.

The result was a big one for Manning, daughter of Classic-winning jockey Kevin and wife Una, who is in just her second year of consigning under the Boherguy Stud banner.

"He's been an absolute superstar all week," said Manning. "He has the pedigree, the physical and the walk, but in this climate it's hard to know what people are willing to spend. He's worth every bit of that price though. 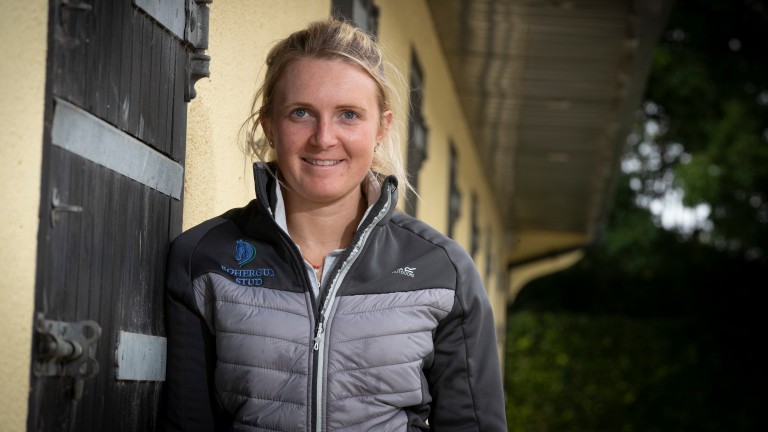 Clare Manning: the brains behind Boherguy Stud
Patrick McCann
"I thought if we got £200,000 it would have been brilliant, so to set a new record is just phenomenal. He was foaled down on granda's farm in Wexford and came up to me for prep for the last eight weeks. He's one of those horses who has something about him the minute he steps out of the box."

The colt is out of Gearanai, a daughter of Toccet who has produced four winners, including Gear Up, who brought a big update to the sale having landed the York Group 3 after the catalogue was released, and Guaranteed, another son of Teofilo who won the Eyrefield Stakes in the Bolger silks.

Manning said she had spoken to her grandfather not long after the hammer fell, albeit only for a quick debrief.

"He's absolutely delighted, although I had to give him the bum's rush as I had a filly going through a few lots later!" she said. "We have more lots to sell tomorrow and then it's on to Doncaster, so celebrations will have to wait." 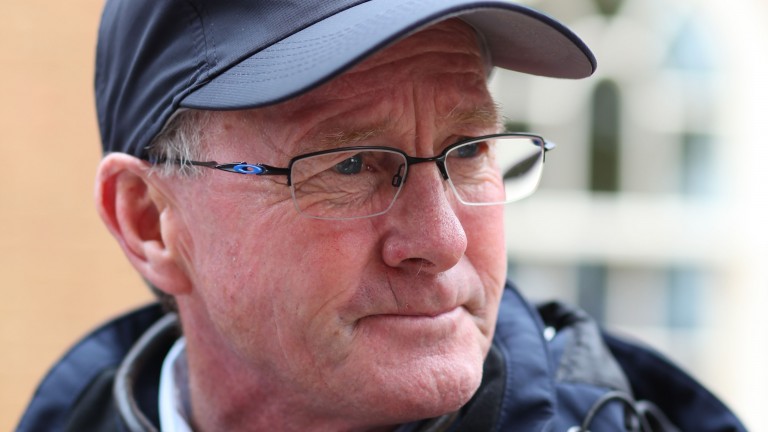 Mick Kinane: "I didn't think I'd be pushed that hard"
Laura Green
Gear Up, who was bought by Mark Johnston for €52,000 at the Goffs Orby Sale last year, could provide the pedigree with a further upgrade as he is entered in the Royal Lodge on Saturday.

Kinane, whose purchase was bought with resale at the 2022 Hong Kong International Sale in mind, said: "I didn't think I'd be pushed that hard but he's a standout. Hopefully he's a racehorse, just like his brother is. He could have been here in Book 1, he's a lovely horse."

The Teofilo colt sailed past the previous high mark at the September Sale, set in 2018 when Shadwell went to €275,000 for a Kodiac filly out of Lady Lucia.

Another lot who brought a punchy update to proceedings was the Mehmas half-brother to Champers Elysees, winner of the Group 1 Matron Stakes in the run up to the sale. Plenty stayed late into the session to see the colt go through the ring, including Joe Foley, who struck a winning bid of £190,000.

The transaction ensured a big return for Beechvale Stud, who pinhooked the colt for just €19,000 at last year's Goffs November Foal Sale before Mehmas's first two-year-olds had hit the track and when Champers Elysees was listed simply as a winner.

"He was a very athletic foal and we had to really like him to spend €19,000 on him," said Tara Armstrong of Beechvale Stud, who pinhooked the colt with her brother Chris. "We were hopeful Champers Elysees would progress at three and thought Mehmas would have a big chance of becoming champion first-season sire too. My dad has looked after the colt since last year so it is all down to him."

Armstrong could have been forgiven for tempering her enthusiasm given the tricky market at present, but the pinhooker confessed to some quiet pre-sale confidence. She said: "You can never be too sure but we were hopeful as he's a very good physical and he is very correct." 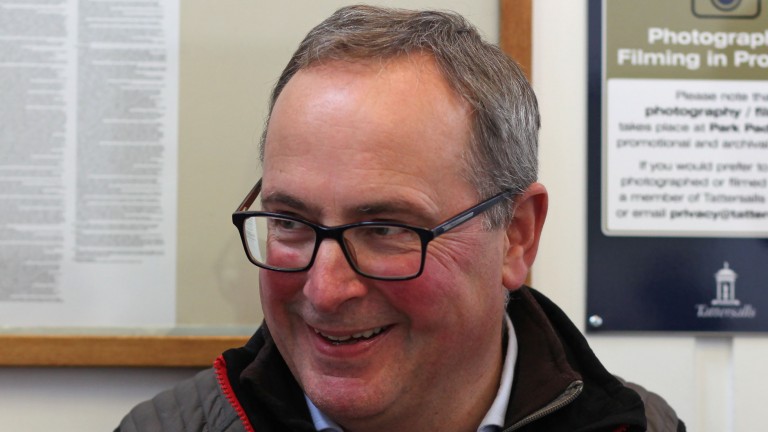 Joe Foley: signed for the £190,000 second top lot
Laura Green
Champers Elysees is, of course, by Elzaam, who stands at Foley's Ballyhane Stud, and the successful bidder said he had been following the career of the dam, the Mark Of Esteem mare La Cuvee, for some time.

"He's a particularly nice colt," said Foley, who secured the youngster for Steve Parkin's Clipper Logistics squad. "It's great for the vendors as they got the double up with a Group 1 update thanks to the mare and obviously the sire has done very well.

"The mare is very good, I've been watching her for a while now as she's bred two good horses by Elzaam, not only Champers Elysees but Daddies Girl too, she's rated 95."

Clive Cox returned the source of a past success when going to £75,000 for the Red Jazz brother to Snazzy Jazzy, with whom the trainer has won six races, including the Group 3 Prix de Seine-et-Oise. The colt is set to carry the sky blue and orange silks of Middleham Park Racing.

"I'm delighted to get a brother to Snazzy Jazzy, who we won the [Tattersalls Ireland Super Auction] sales race with," said Cox. "I loved him as soon as I saw him, he's very athletic. Sadly there aren't too many Red Jazzes around but I'm delighted to have secured him, especially for Middleham Park Racing as he's our first horse for them. I'm thrilled to have a horse like this to train for them."

It was at the 2016 September Sale when Cox went to €65,000 for Snazzy Jazzy, and with the five-year-old having amassed £240,456 in prize-money, the trainer will be hoping the similarities don't end with the full-brothers' appearances.

"They're both really athletic types and knowing the brother means buying him made a lot of sense," added Cox. "He's a nice horse, the brother is 110-rated and from a proper black-type family, while the mare is still quite young too, so all those things work in his favour." 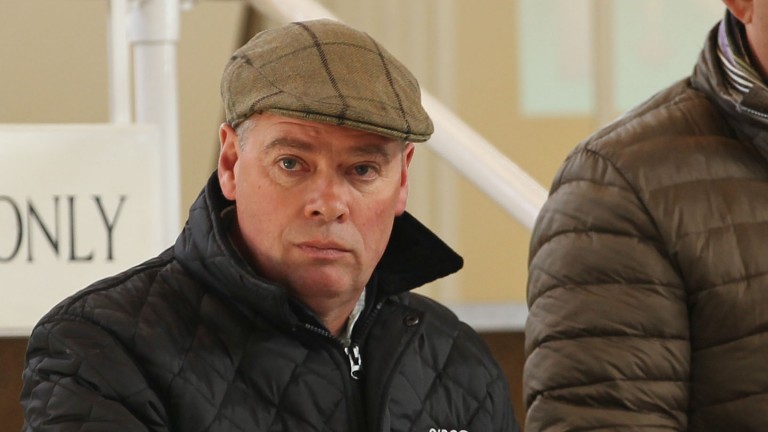 Clive Cox will train Snazzy Jazzy's full-brother
Laura Green
The colt is the final foal that Nicky Teehan's Bluegate Stud bred from the rags-to-riches broodmare Bulrushes, a half-sister to Jersey Stakes winner Tariq who was picked up for a minimum bid of 800gns at the 2010 December Sale.

Despite that lowly price tag, the daughter of Byron has gone on to produce four black-type performers, with Snazzy Jazzy joined by the Group 3-winning Ross Castle, Listed scorer Ten Year Ticket and the Group 3-placed Admiral Rous.

"Unbelievable, she's a mare of a lifetime for someone like me," said Teehan. "Her four colts so far have all got black type and this lad was very nice from day one. He never gave us any trouble at home and didn't turn a hair when he landed here, he just got stuck into his showing so, in a very strange time, I was as confident as I could be."

Bulrushes was purchased privately by Al Wasmiyah Farm and has a Dark Angel colt foal on the ground. She was covered by Night Of Thunder earlier this year. Teehan may have sold Bulrushes, but he is now breeding from her Kodiac half-sister Katora, who is in foal to Make Believe.

He added: "It's great that Tatts got the sale on here and Liz Wood and Orla McKenna have been a great help to the Irish vendors in making this all work as smoothly as possible. Given what the mare has produced I hoped I'd be in the top tier of the sale, so it was an easy decision to come over. I hope he's as lucky for Clive as Snazzy Jazzy was."

There are just two lots by Kingman in the September Yearling Sale catalogue and Katie Walsh went to £70,000 for the first of those, the filly out of Continental Drift offered by The Castlebridge Consignment.

Not only is the Juddmonte-bred filly by one of the stallion ranks' most promising names but she hails from one of Khalid Abdullah's most celebrated families as her dam is out of Intercontinental, a Grade 1-winning sister to Banks Hill, Champs Elysees, Cacique and Dansili. In turn, the quintet are out of the blue hen Hasili.

Walsh, who signed as Greenhills Farm, confirmed the filly had been bought with a breeze-up campaign in mind, though said she hoped the youngster's pedigree would provide ongoing appeal wherever she next appears on the market. 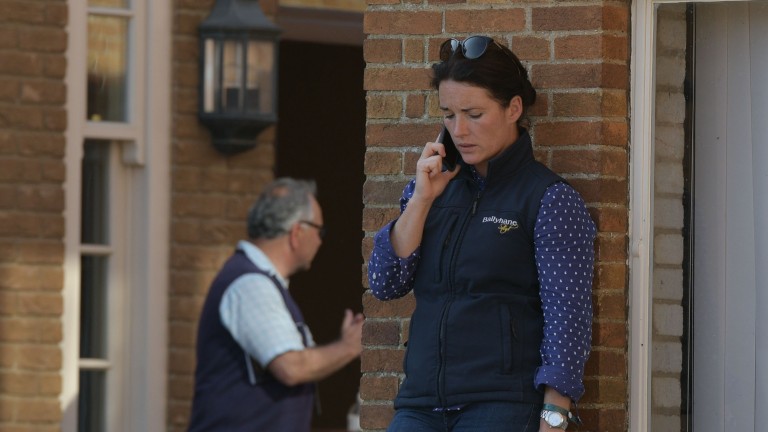 Katie Walsh: "There are certainly more positives than negatives so hopefully time will tell it was the right thing to do"
Melanie Sauer
"She's got a pedigree to die for," said Walsh. "It's a lot of money but I think the downside with her is very minimal. As a broodmare she'll always hold her value, though I'm hoping we can come to the breeze-ups and breeze nicely and be lucky. She'll need to grow a little but they've all got bits of improving to do at this age.

"There are certainly more positives than negatives so hopefully time will tell it was the right thing to do. I'm sure Kingman's fee will go up next year so I don't know when I'll next be able to get my hands on one."

It was recently announced that Newmarket stalwart James Eustace is to be succeeded by his son Harry as the licence holder at Park Lodge Stables, and the younger Eustace has an exciting recruit to look forward to after Hubie de Burgh went to £68,000 for the Australia filly out of Dillydallydo offered by Manister House Stud.

"She's been bought for a new client who wanted to send a horse to Harry Eustace," said De Burgh. "She's from a very good family and is by a very good young stallion who is supplying plenty of Group performers. If she becomes a stakes performer she'll be worth many multiples of what she cost today."

The filly is the first out of a Holy Roman Emperor half-sister to stakes performers like Drill Sergeant and Nobilis, while the family traces back to Group 1 winners such as Intense Focus, Skitter Skatter and Soldier Of Fortune.

Harry Eustace has spent the last four years as assistant to William Haggas and hopes to be ready to take over from his father in January, once he has completed his BHA training modules.

The session supplied solid trade throughout given the wider circumstances, with the clearance rate closing at 83 per cent, with 172 of 206 offered lots finding a buyer. Turnover closed at £4,023,500, down 13 per cent year-on-year, the average was up one per cent to £23,395, while the median was down three points to £18,500.

The September Sale concludes on Tuesday with a session starting at 10am.

FIRST PUBLISHED 8:47PM, SEP 21 2020
He has the pedigree, the physical and the walk, but in this climate it's hard to know what people are willing to spend