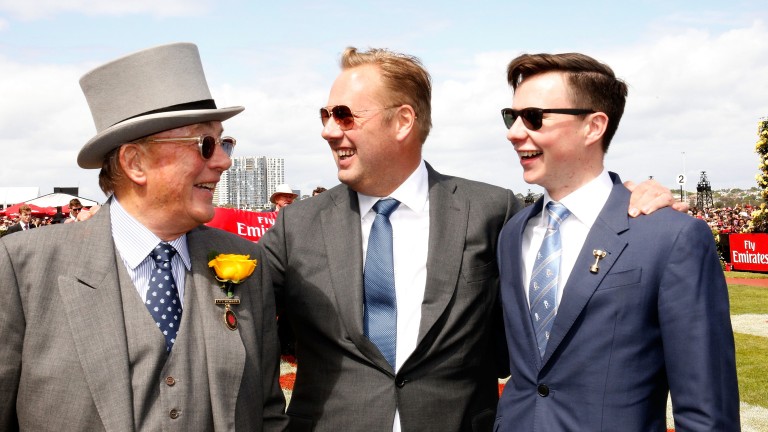 Nick Williams has thrown down the challenge to the Australian and New Zealand breeding industry in light of renewed calls for a cap on internationally-trained runners in the Melbourne Cup.

The son of the most successful owner in the history of Australia's greatest race, six-time winner Lloyd Williams, said there should not be a ban on overseas runners in the two-mile Group 1.

Williams said local stock was simply not good enough to compete with the northern hemisphere-bred raiders who have infiltrated the ranks in recent years.

"I certainly don't believe that the VRC [Victoria Racing Club] or RV [Racing Victoria] should be limiting the Melbourne Cup and overseas participation, because we're simply good enough at what we do," he said on RSN927's Racing Pulse.

"We've got to get better at what we do and the problem will fix itself."

Williams has been a part of the ownership of half of the past six Melbourne Cup winners, all of which were bred in Europe.

Green Moon (2012) and Almandin (2016) were trained to victory out of Macedon Lodge by Robert Hickmott after being imported to Australia, while last year's winner Rekindling was prepared by Irish horseman Joseph O'Brien.

Williams said the demise of local staying talent should not have come as a surprise to anyone given the increased focus on speed breeding, which had forced he and his father to turn their attention elsewhere.

"The facts are that we're no good at breeding stayers in this country," he said bluntly.

"I've got my theories on why we're no good at it. The breeders have neglected it and I think the trainers have neg stayers, so what's happening is we're seeing people like ourselves having to import horses.

"I can tell you, we would much prefer to be buying Australian and New Zealand-bred bred horses.

"There's probably no one over the past 50 years that's bought more of them than our family and it certainly doesn't thrill us to be buying horses form the other side of the world.

"We'd much prefer to be going to the Karaka Yearling Sales and to Sydney at Inglis and buying horses that could stand up to be top class middle-distance and staying horses."

The loss of Zabeel - a three-time Melbourne Cup-winning sire, including Efficient (2007) for Macedon Lodge - has created a gaping hole according to Williams.

"I think Zabeel really covered a lot of cracks in the industry, because he was such a super sire," he said.

"You've seen that our horses, once they get beyond Oaks and Derbys when they're racing amongst themselves, unless you get a freak like Jameka or one of these horses... Winx for that matter... you haven't got a chance of competing on the open stage.

"So you're going to be running around in the lesser on the open stage and that's not we want to do."

Williams part-owns former champion European stayer Order Of St George, who was this week retired, and he said he would love to see him shuttle to this part of the world to help kickstart a staying revival.

"I'd love to see him standing in New Zealand, that's the home of the stayer and has been forever," he said.

"They're very good at breeding them and very good at rearing them, they just haven't in the last little while had really good stallions and they haven't upgraded their mares to be able to breed good enough horses."

FIRST PUBLISHED 4:14PM, SEP 13 2018
I think Zabeel really covered a lot of cracks in the industry, because he was such a super sire