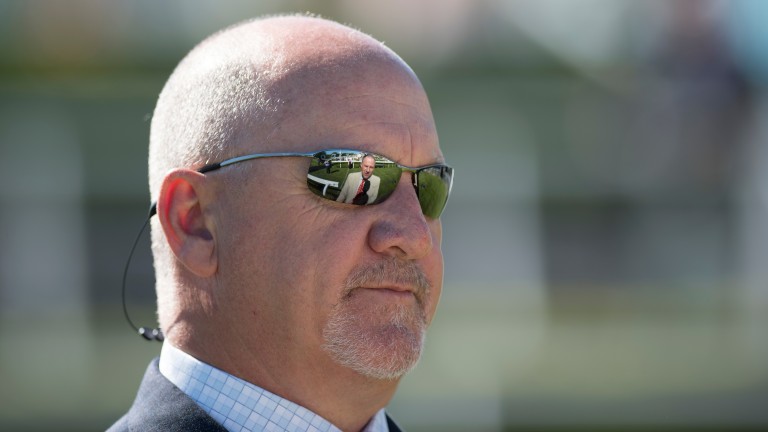 Kenny McPeek: bids for consolation for Epsom misfortunes in the Belmont Stakes
Edward Whitaker
1 of 1
By Chris McGrath 1:17PM, JUN 3 2017

Audacious, yes; crazy, perhaps; but it has always been true in horseracing that great feats are sometimes achieved only by dint of trying something that could fall into either category. So if Kenny McPeek’s attempt to win two Classics over a mile and a half in eight days could not have got off to a worse start, nobody is entitled to dismiss his prospects of making amends in the Belmont Stakes next Saturday.

McPeek’s readiness to take a fresh view of conventional wisdom extends to a renunciation of hamster-wheel American trackwork with his own, European-style training facility near Lexington with undulating turf gallops.

But his attempt to win the Oaks at Epsom with a Scat Daddy half-sister to a Breeders’ Cup Sprint winner backfired in maddening fashion. Without the pony escort she has always had on home soil, Daddys Lil Darling so panicked in the thunderstorm preceding the race that Olivier Peslier decided even the most bruising form of discretion to be the better part of valour, and threw himself out of the saddle.

In fairness, on paper Daddys Lil Darling had barely been entitled even to stay on so well for second through the ninth furlong of the Kentucky Oaks. And who, after all, was ready for McPeek when he sent out 33-1 shot Hard Buck to take second in the 2004 King George VI & Queen Elizabeth Stakes? Or, more pertinently, when he won the 2002 Belmont with Sarava - at 70-1 the biggest upset in the race’s history?

In the 149th running he saddles a colt with every right to closer consideration, Senior Investment having finished third in the Preakness a couple of weeks ago. And, again, even that arguably represented a step beyond the expectations invited by his pedigree.

Senior Investment is by the sprinter Discreetly Mine, a King’s Bishop winner no less, whose fee before his departure for Uruguay last summer had dwindled from $15,000 to $5,000. He does have one champion in his first four crops, but you would have to go to Trinidad and Tobago to find him.

Yet the fact is that Discreetly Mine is by Mineshaft, a representative son of that great Classic influence AP Indy, while his dam - the Private Account mare Pretty Discreet - herself won a Grade 1 over 10f in the Alabama Stakes; and has produced three Grade 1 operators, albeit these include another speed merchant in Discreet Cat, who matched Easy Goer’s track record for the mile at Aqueduct.

There are other Classic threads, moreover, lurking behind Discreetly Mine. His damsire Private Account, for instance, produced the great Personal Ensign - whose son Our Emblem was sire of War Emblem, derailed in his Triple Crown bid only in the Belmont won by none other than Sarava.

And the second dam is by Believe It, third to Affirmed and Alydar in the Kentucky Derby and also the damsire of Real Quiet, who failed only by a nose in his own Triple Crown bid in New York. Still further back, the fifth dam is granddam to a Belmont winner in Touch Gold.

Senior Investment himself was bought by McPeek for $95,000 as a Keeneland September yearling, and subsequently sold on to former Reebok boss Paul Fireman. The colt took four juvenile starts to break his maiden and was disqualified for interference on his reappearance, but an impressive win next time prompted a crack at the Louisiana Derby. He disappointed there but resumed his progress by pouncing late at Lexington and then came his breakout performance in the Preakness, again closing from way off the pace turning in.

His dam is a daughter of Deputy Commander named Plaid, a stakes-winning miler whose three other runners have all won. The family majors in quantity, not quality, but there is a solid base of hard-knocking speed and soundness: Plaid herself won 13 times, persevering to the age of six; and her dam 11 times, over a similar span. She was a stakes-performing sprinter by Unreal Zeal, a fast son of Mr Prospector who was a leading sire in Illinois.

All in all, this is a pretty left-field background for a Belmont colt. You have to conclude that his stretch run in the Preakness had a lot to do with his damsire.

Deputy Commander - himself by an outstanding broodmare sire in Deputy Minister, who also gave us Touch Gold - won the Travers by a nose, finished second to Skip Away in the Breeders' Cup Classic, and sired a Travers winner (and Belmont runner-up) in Ten Most Wanted.

Perhaps the key in this context is Deputy Commander's superbly tough dam, Anka Germania. She was a top-notch turf runner, beating the boys in the 1988 Sword Dancer Invitational, and a half-sister to Mourjane, who finished third to Pebbles in the Breeders' Cup Turf.

Anka Germania - by Malinowski, and therefore importing another golden broodmare sire-line from Sir Ivor - twice bounced back from life-threatening conditions. "Ninety-nine and a half percent wouldn't have been able to lick the problems she had," said her trainer Thomas Skiffington. "Despite them all, she always gave you her ultimate. She never cheated, never lied."

One way or another, Senior Investment appeared to have dug out a seam of stamina from somewhere. Perhaps it is partly a function of a hereditary toughness, which can get you a long way in a field historically lacking in genes equal to the distance.

One thing is for sure. If this tall, long-striding chestnut is half as plucky as his trainer, he could yet extend the Triple Crown sufferings of Classic Empire.