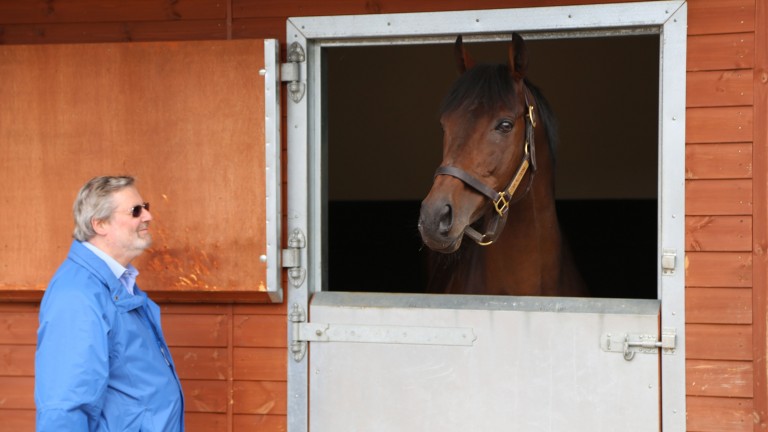 So much of the stallion business is a numbers game, with the received wisdom being that the more mares a sire covers, the greater the chance he has of becoming a success. It is a theory that is not unfounded.

However, although subfertility means he will only ever be represented by small crops, the inimitable Al Kazeem has rarely been far from the headlines during his second career. He may not be up to covering the kind of three-figure books that have become the norm, but that has not stopped him generating big figures on the track.

He has already sired one Group 1 scorer in Aspetar, and that same horse was one of four European stakes winners for his sire in 2020, despite fielding only 28 runners. While the sample size may be small, a stakes winners-to-runners ratio of 14 per cent puts Al Kazeem ahead of pretty much any heavyweight sire you care to think of.

The 13-year-old son of Dubawi is being readied for his sixth covering season at his owner-breeder John Deer's Oakgrove Stud in Chepstow, where he will cover a book long on quality, if not on quantity.

"He's in great nick," says stud manager David Hilton. "Mark Savage, who used to be a good apprentice jockey in his day, looks after him and always says the horse gets fat on fresh air! We keep his routine quite natural, he's out in his paddock a lot of the time and just comes in under lights from December until the clocks change. 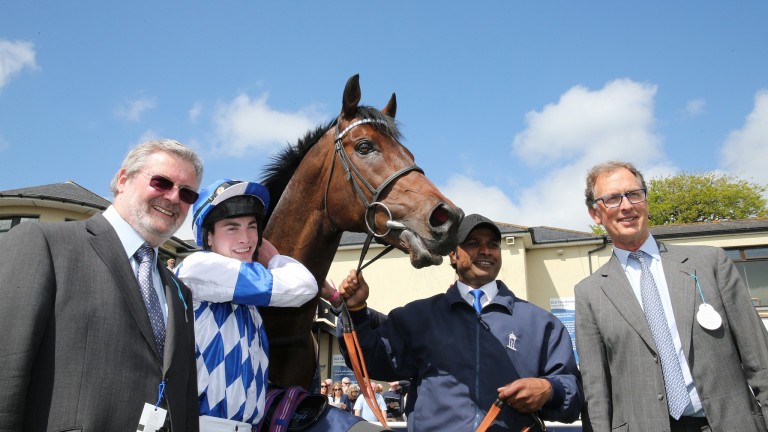 "He's a tough bugger, a real character, but he's a pleasure to have around. He's quite a rare individual, he has an elegance that you don't see in many horses. When you consider the relatively limited opportunities he's had at stud, his results are incredible."

Al Kazeem's 2021 book is likely to be capped at around 20, and the Oakgrove team will be hoping that they can help him maintain the 100 per cent strike-rate he achieved some 12 months ago.

"He covered only a handful of mares last year but he got all of them in foal and we think we've cracked his best covering routine now," explains Hilton. "This does mean he won't cover big numbers and we'll be very strict with his book, but he'll cover every mare twice in a short period of time.

"That'll give everyone the best chance of getting their mare in foal, everyone will be getting the best of him. Our broodmare band has halved in recent times; previously there were some average mares in there just to give him numbers, but I think we'll keep to five or six of our own and send the best to him."

He continues: "We know the horse is never going to be a big money-spinner but he means an awful lot to John and all of the Deer family. John's son Philip, along with his own children, seem to have John's passion for the stud, which is great. 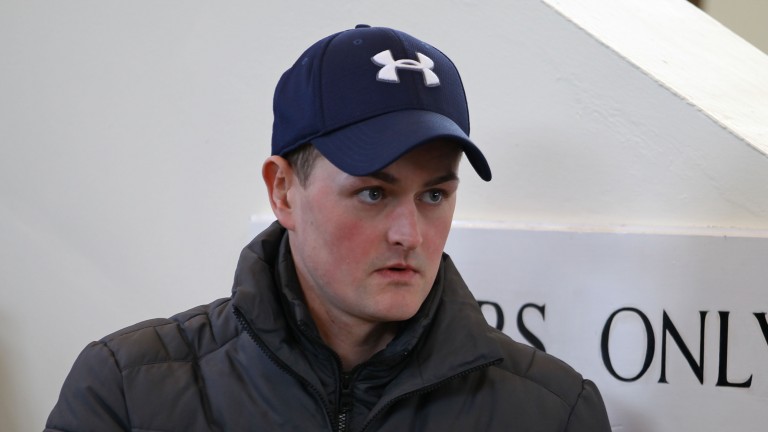 "When you get a horse like Al Kazeem he leaves a real legacy, so we have to give him every chance by getting as many good mares to him as possible."

Oakgrove have landed a real coup in 2021 as Daahyeh, winner of the Albany and Rockfel Stakes and runner-up in the Moyglare Stud Stakes and Breeders' Cup Juvenile Fillies Turf, is the headline act among Al Kazeem's book. The daughter of Bated Breath was, of course, bred by Deer and raised at Oakgrove before she was signed for by Oliver St Lawrence at £75,000 at the Goffs UK Premier Sale.

"We've been very lucky to be supported by Daahyeh's connections," says Hilton. "It's a nice story that she was born and raised on the farm, it's almost like she's coming home and everyone here is excited to have her back. She was as good a two-year-old filly as any in 2019 and to get a mare like that in Al Kazeem's book is very exciting."

"Al Shahania Stud have breeding rights in the horse and they're sending three nice mares," says Hilton. "One of them, Time Being, is a full-sister to Timepiece and she's in foal to Justify. They're also sending the Group 3-winning and Group 1-placed Ferevia, who's by Motivator, and a maiden called Listentome, she's by Galileo and from a very nice family." 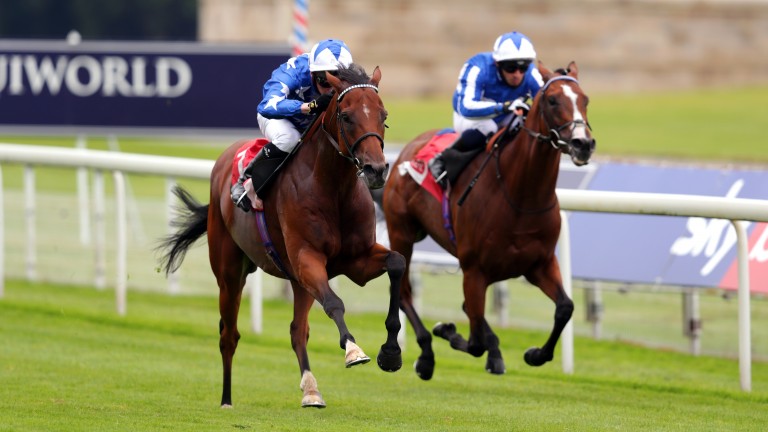 Hilton adds: "Ray Bailey, an owner-breeder from Shropshire, has been a great supporter of the horse and is sending two of his mares again this year."

As well as dedicated support from outside breeders, Al Kazeem can of course count on a firm foundation of mares from within Oakgrove's own broodmare band.

Hilton says: "We're sending him Exceptionelle, she's a mare we have a lot of faith in, and a maiden called Penmaen Spirit, who's by Kingman and out of a Group-winning Pivotal mare. He'll also cover Longing To Dance, the dam of John's Group 3 winner Be My Gal."

As well as getting behind Al Kazeem, members of the Deers' broodmare band will also head for some exciting outside matings, including Daahyeh's dam Affluent, who is set to return to the source of her biggest success.

"Affluent will go to Bated Breath," says Hilton. "He's done really well and is very commercial, he's certainly not done us a bad turn! She's a small mare but she has a lot of quality. All her progeny are absolute bulls and I think she puts everything into her foals.

"Affluent has an Al Kazeem yearling on the ground and I believe he's as good a yearling as we've ever had on the farm. He has that rare presence that his sire has, so we're excited about him." 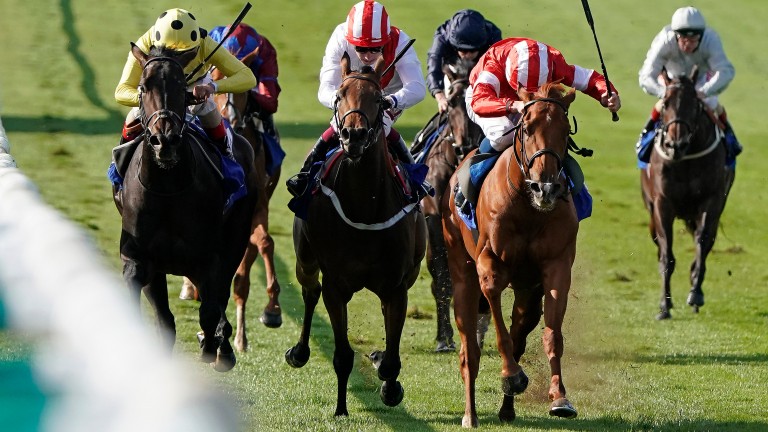 He continues: "Poplin, the dam of the Listed winner and Group 2 placed Alkandora, will be going to Frankel.

"We bought Titi Makfi two years ago, she had a very nice filly by Lope De Vega for her first foal. She went back to Lope De Vega last year and this time around she'll go to Dark Angel.

"Altesse Imperiale has a Frankel filly who'll go to Book 1 this year and she's going to Oasis Dream.

"We sold Be My Gal's Dubawi filly for 520,000gns at last year's sales, she's got a Kingman yearling filly and she'll go to Showcasing."

One absentee from the list of Oakgrove mating plans is Kazeem, the dam of Al Kazeem, who has been pensioned after delivering her final foal in February last year.

"Kazeem has begun her well-deserved retirement," reports Hilton. "She had a Cracksman colt last year and now we'll just try to keep her fat and happy for as long as we can. She's joined up with Patavellian, he's 23 now, and they live here at the stud and just enjoy life."

The legacy the 23-year-old daughter of Darshaan has left behind is not confined to Al Kazeem's stallion career, with Hilton explaining that her daughters are now among the Oakgrove broodmare band.

"Taking over from her are her daughters Kingslady, a nice mare by Kingman, and an unraced Oasis Dream mare called Queen Kazeem, who's very similar to Affluent. They're both heading to Bated Breath and we're excited about their breeding careers." 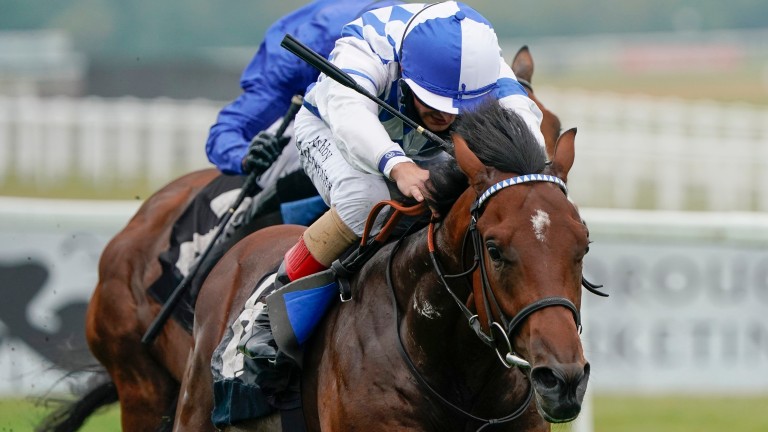 Hilton concludes: "We're consistently breeding above-average horses, we've had at least one stakes horse over the last few years, and this year's crop of yearlings is probably the best in terms of overall quality, certainly in the time I've been here."

So it seems there is no shortage of reasons for the Oakgrove team to be very excited about what the future holds, although Hilton is quick to acknowledge that the stud's forecast would not look so rosy if it was not for all the hard work that has gone in during a particularly trying 12 months.

"Everyone on the stud has been fantastic during a difficult year," he says in reference to the impact Covid-19 has had, and continues to have, on what was once considered everyday life. "All the staff have worked so hard to keep the show on the road, it's thanks to their dedication and John's passion and investment that we have these plans in place now.

"The same goes for the wider industry, organisations like the TBA and the sales companies who have provided safe workplaces and marketplaces for the industry to carry on. If they hadn't, life could be looking very different now."

FIRST PUBLISHED 5:02PM, FEB 11 2021
When you consider the relatively limited opportunities he's had at stud, his results are incredible