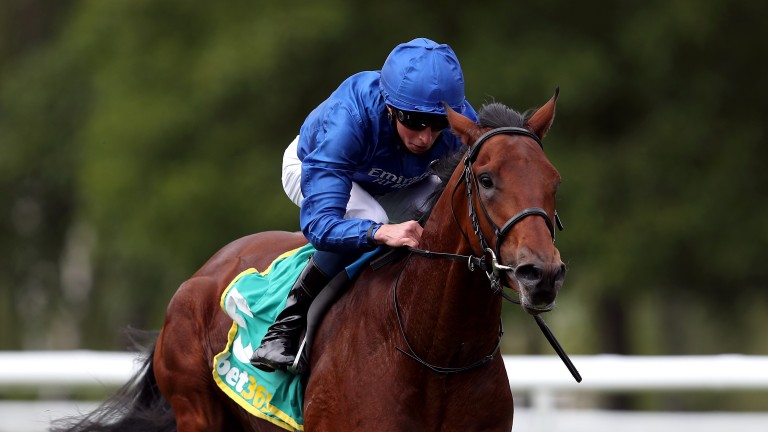 Master Of The Seas: emulated his sire Dubawi in the Superlative Stakes
David Davies/Getty
1 of 1
By Martin Stevens 4:26PM, JUL 11 2020

Darley's celebrated sire Dubawi could have another top-notcher on his hands, judging by the impressive victory of his son Master Of The Seas in the Group 2 Superlative Stakes at Newmarket on Saturday.

Godolphin's homebred colt, trained by Charlie Appleby, is now unbeaten in two starts after defeating Devious Company by three lengths in the seven-furlong contest whose roll of honour includes stars such as Dr Devious, Olympic Glory and Dubawi himself.

Master Of The Seas becomes the 185th stakes winner by Dubawi, who stands at Dalham Hall Stud in Newmarket at a fee of £250,000.

The super sire has 42 Group/Grade 1 winners on his record, including the top-class two-year-olds Quorto, Too Darn Hot, Wild Illusion and Wuheida, and it would be no surprise to see Master Of The Seas join that elite company.

Master Of The Seas hails from a family that has provided Godolphin owner Sheikh Mohammed plenty of success since he bought the colt's maternal granddam Kerrera privately from owner Simon Fraser as an unraced two-year-old in 1988, solely on the strength of reports of her sparkling work on the gallops.

Kerrera, a daughter of Diesis and Musidora Stakes winner Rimosa's Pet, duly won her maiden by three lengths for Sir Michael Stoute and then destroyed her rivals by six lengths in the Cherry Hinton Stakes at the Newmarket July meeting.

She went on to finish second in the Princess Margaret Stakes and Flying Childers Stakes at two, and was runner-up to stablemate Musical Bliss in the 1,000 Guineas on her three-year-old bow. Although she did not win again, she ran a cracker when fourth to Cadeaux Genereux in the July Cup.

Kerrera produced seven winners at paddocks, but just the one at black-type level – that being Master Of The Seas' dam Firth Of Lorne, a daughter of Danehill who scored in the Listed Prix des Sablonnets and ran second behind Zenda, the future dam of Kingman, in the Poule d'Essai des Pouliches.

Firth Of Lorne is in turn the dam of eight winners, with Master Of The Seas her fourth stakes winner after Etive (by Elusive Quality), who struck at Listed level at Hanover; Falls Of Lora (by Street Cry), who took the UAE Oaks and Coral Distaff; and Latharnach (by Iffraaj), who was successful in the Guisborough Stakes and finished runner-up in the St James's Palace Stakes.

Firth Of Lorne, aged 21, has a yearling filly by Ribchester and was covered by the same sire this year.