Marvellous evening in store for Aidan O'Brien at Dundalk 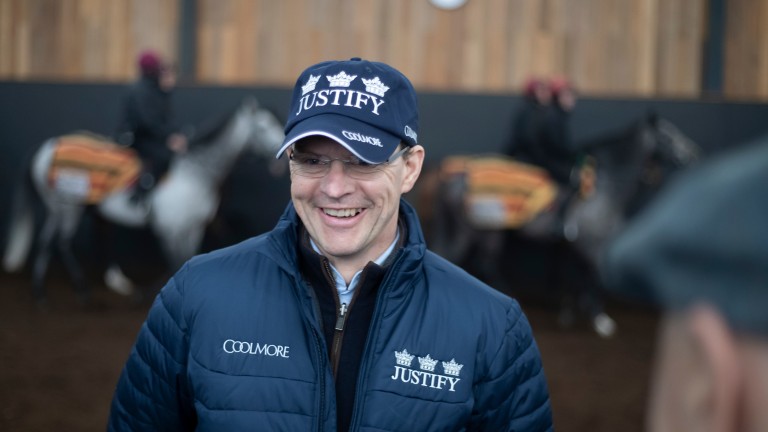 Two more first-season sires attempt to get off the ground with their debut runners at Dundalk on Tuesday but it is likely that a far more proven combination will deprive them of such an impressive feat.

Neither Kingston Hill nor Free Eagle are expected to trouble the top of the freshman stallion standings, even if they are standing at premier operations and their offspring will be worth monitoring through the year.

However, the Aidan O’Brien-trained Fort Myers has the sort of profile which could make him a Royal Ascot contender if he shows something in the Irish Stallion Farms EBF Maiden.

A son of Claiborne’s War Front, who has provided O’Brien with plenty of precocious ammunition through the likes of Air Force Blue and War Command, Fort Myers is the second foal of Irish Guineas winner Marvellous. The dam is also the full-sister of the dual Guineas hero Gleneagles, outstanding juvenile and three-year-old performer Happily and the durable Taj Mahal.

Coincidentally, Marvellous’s first foal Carefully is also running later on in the card at Ireland’s sole all-weather venue. She has not shown an awful lot of ability so far but was evidently more backward than her younger brother as she did not make her racecourse bow until late August. The three-year-old will find scant better opportunities to advance her own cause than in the Crowne Plaza Dundalk Race & Stay Fillies Maiden.

Kingston Hill, whose crowning glory came in the 2014 St Leger, might not have to be typecast as a sire of staying prospects as he is a son of the versatile Mastercraftsman and won the Futurity himself as a youngster. He stands for €5,000 at Coolmore, with his first yearlings at British and Irish sales during last year reaching an average of 12,559gns at a peak of 60,000gns.

His son St George’s Head, who has inherited the family’s grey genes, changed hands for €9,000 as a foal at Goffs. In his favour is that dam Good Chocolate introduces some sharp Italian form into his profile, while trainer Kieran Cotter hit the target with his first juvenile runner of the year, George Cornelius, over course and distance last week.

Trainer Peter Fahey is less renowned for straight-up two-year-old winners and he has the honour of representing Free Eagle for the first time. Soaring Monarch was jointly bred by the Irish National Stud, which stands the stallion, and he is related to several minor winners. Free Eagle, who landed the Prince Of Wales’s Stakes, made more of an impression in the ring with his first yearlings, one of which made €400,000 at last year’s Goffs Orby event.

It would appear, though, that once again O’Brien’s sternest opposition is going to come through his son Joseph. Never Before, picked up at last year’s Tattersalls Book 1 for 130,000gns. The son of en-vogue No Nay Never is a half-brother to Bunker, who was second to Berkshire in the 2013 Chesham Stakes and beat the subsequent Jean-Luc Lagardere and French Guineas winner Karakontie in a Deauville Listed event later that summer.