Gaie Johnson Houghton to send her star mare to Showcasing 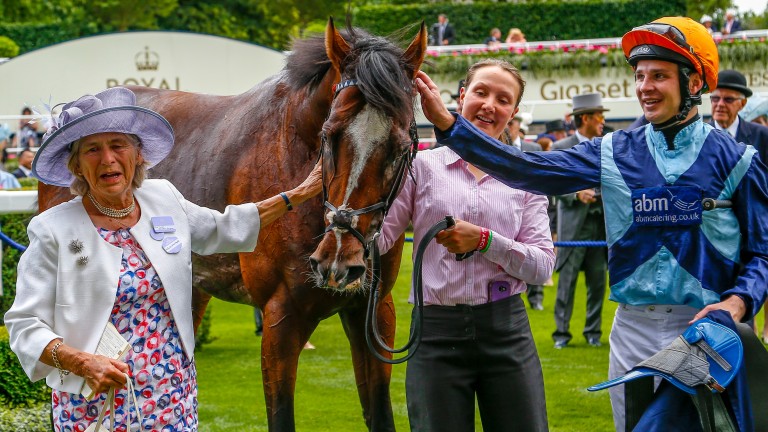 Small breeders all across Britain and Ireland will have looked on with admiration as the Queen Anne Stakes at Royal Ascot last year went the way of Accidental Agent – a son of Delegator conceived at a fee of £5,000.

The result paid testament to the perseverance and shrewd judgment of owner-breeder Gaie Johnson Houghton, who has nurtured the family of Accidental Agent for five generations with her trainer husband Fulke, having initially bred from the fifth dam, the 1971-foaled Sirnelta.

"Fulke bought the original mare [Sirnelta] because one of our owners didn't want her any longer and was going to sell her," Johnson Houghton explains. "[Fulke] was rather vexed as he considered Sirnelta to be his nicest mare and she ended up breeding a very good filly in Dead Certain, so we sort of fell into breeding."

Dead Certain won three of the most prestigious contests for juvenile fillies in Britain - the Queen Mary Stakes, Lowther Stakes and Cheveley Park Stakes - and annexed the Prix Maurice de Gheest as a three-year-old.

One of Sirnelta's last daughters, Shall We Run, produced the Gimcrack Stakes scorer Bannister and Listed-placed sprinter Roo, the mother of Accidental Agent's granddam Roodeye and four other black-type performers.

"I'm lucky I've kept the right strand of the family," says Johnson Houghton. "It could easily have gone the other way as well – I tend to keep the first filly out of a mare and sell the rest, but Shall We Run was one of the last foals out of Sirnelta. We held on to her to keep the line going."

The top-flight triumph of Accidental Agent, an 8,000gns Book 2 vendor buyback, means that a significantly more expensive cover is in the offing for his dam this spring.

"Roodle will go to Showcasing this year," says Johnson Houghton, the mother of Accidental Agent's trainer Eve. "I sent her dam, Roodeye, to him during his first and second season when he was still cheap.

"I sold Roodeye's first foal, Prize Exhibit, adequately well and her second foal, Super Sixteen, very well but he sadly injured himself in Hong Kong having won there."

Prize Exhibit, a 28,000gns Book 2 yearling purchase for Jamie Osborne, won two juvenile sprints for the trainer before finishing a close third to Local Time in the Group 3 Oh So Sharp Stakes at Newmarket.

Switched to the yard of James Cassidy in the US, she was third in the Grade 1 Del Mar Oaks at three and landed the Grade 2 Monrovia Stakes at Santa Anita at four. Prize Exhibit sold to Barronstown Stud for 775,000gns at the 2017 Tattersalls December Sale, and was covered by Galileo last year.

Super Sixteen, meanwhile, won on his Sha Tin debut after he was sourced for 140,000gns by the Hong Kong Jockey Club from Hillwood Stud – which consigns on behalf of Johnson Houghton – at Book 2 of the Tattersalls October Sale.

Roodle is currently in foal to another son of Oasis Dream in Muhaarar, and Johnson Houghton is lavish in her praise of the Nunnery Stud stallion.

"I fell in love with him at Ascot – he was the most beautiful horse and probably still is," says Johnson Houghton. "I'm keeping my fingers crossed that his runners are as good as they looked as yearlings.

"I tend not to go and look at stallions, instead I try and remember what they were like on the racecourse."

Last year the family's affinity with Showcasing was furthered by Mohaather – a half-brother to Roodle by the Whitsbury Manor Stud linchpin – who made his Group race breakthrough in the Horris Hill Stakes at Newbury in October.

Bred by Johnson Houghton, Mohaather races for Hamdan Al Maktoum having been purchased by Shadwell from Hillwood Stud for 110,000gns at Book 2 in 2017.

"To win the Horris Hill was lovely," says Johnson Houghton. "Especially as he was Roodeye's last foal. She died of colitis two and a half weeks after he was foaled and so he was an orphan.

"I also had Madame Tantzy, who is the first filly out of Roodle, running for me in the first race that day and she finished third. I have wild ideas for her but winning a race is the first priority."

After the passing of Roodeye, Johnson Houghton's broodmare band numbers just two – her other mare being Peace Lily, a full-sister to the dam of Middle Park Stakes scorer Astaire.

"I'm thinking of sending her to Mayson but am still undecided," she says. "We had Mayson's granddam Bayleaf, a Rothschild mare, in training and went to the December sales to try and buy her, but they decided not to sell her and sent her to Pivotal instead.

"The result of that mating was Mayson's dam Mayleaf. That was a lovely family.

"Peace Lily is in foal to Due Diligence because I liked Roodle's 2017 filly by him so much. We still have the filly though, as she went to the sales and came back again. She's gorgeous and I think she'll be a two-year-old."

The choice of Muhaarar and Showcasing in recent years goes against the grain of the breeder's methods, as Johnson Houghton explains: "When I'm choosing my stallions, I start at £10,000 and go down. Speed is the first thing I look for as that is what Sirnelta's family needs. The stallion also needs to have a good temperament.

"I like to go back to the same stallion when something works but if a stallion's going to be a success then they tend to go up in value so therefore I have to go and find something else.

"They run around my field and I have to look after them, so I really don't want the worry of having a valuable creature rushing around. Breeding is my hobby and goes on in the field below my house - it's such an enormous pleasure to look out at the mares."

Paisley Park the pick of a purple patch for Evergreen Stud

FIRST PUBLISHED 6:40PM, JAN 7 2019
I tend not to go and look at stallions, instead I try and remember what they were like on the racecourse