Tattersalls is set to offer a typically eclectic mix of performers at this year's Autumn Horses in Training Sale, which, even after a significant number of withdrawals, will see over 1,100 lots come under the hammer across four sessions.

The 1,625-lot catalogue has been boosted further by the addition of some strong wildcard entries, most notably English King, winner of the Listed Lingfield Derby Trial for Ed Walker and Bjorn Nielsen.

The son of Camelot's inclusion could potentially help the Autumn Horses in Training Sale continue its record-breaking run of form, with Group 2 Duke of Cambridge Stakes heroine Aljazzi setting a high mark of 1,000,000gns when selling to Newsells Park Stud in 2018, while the Listed-winning and Group 1-placed Summer Sands became the most expensive colt sold at the auction when fetching 625,000gns from Joseph O'Brien last year.

The Autumn Horses in Training Sale is traditionally a truly international affair, with the top 20 lots at last year's edition going to buyers from Australia, Bahrain, Britain, the UAE, Hong Kong, Ireland, Saudi Arabia and the US.

Strong international participation in the ring has been borne out on racecourses around the world. This year alone has seen two new top-level successes added to the sale's roll of honour, with Fierce Impact, bought by Matthew Smith Racing for 120,000gns, winning the Group 1 Makybe Diva Stakes in Australia and River Boyne, a 70,000gns purchase for Red Baron's Barn, claiming the Grade 1 Frank E Kilroe Mile Stakes at Santa Anita. 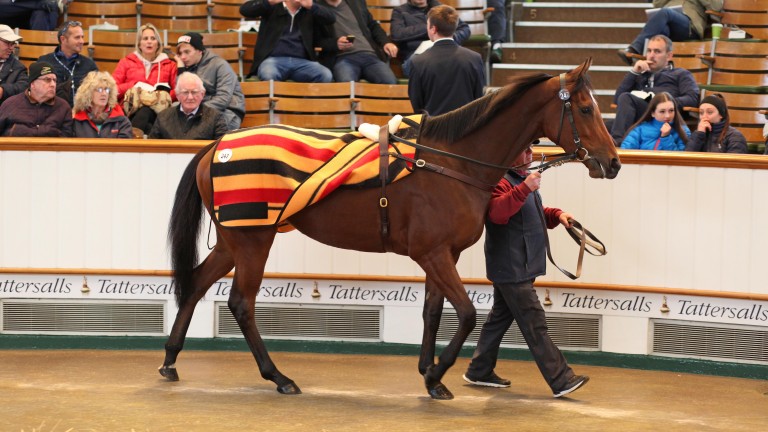 The sale has not only become a consistent source of global Group 1 success, but has also set in motion some genuine rags-to-riches stories.

Chief among the latter category is Jet Setting, who was purchased by the Equinegrowthpartners Syndicate through Kilbride Equine for a mere 12,000gns as an 85-rated maiden. The daughter of Fast Company made giant strides for Adrian Keatley and famously saw off Minding to land the 2016 Irish 1,000 Guineas.

Another Classic winner sourced at the Autumn Horses in Training Sale is 2,000 Guineas hero Makfi, who was picked up by French agent Hubert Barbe when still unraced at just 26,000gns.

Makfi was sourced from the Shadwell draft in 2009, and Hamdan Al Maktoum's operation is set to offer the largest draft this week, with 97 lots entered. Other leading organisations are also heavily represented, including Godolphin, with 23 catalogued lots, and Juddmonte, with 26.

The trainer with the largest consignment is Richard Hannon, with the East Everleigh Stables handler having entered 69 lots. Aidan O'Brien's Ballydoyle Stables has 47 catalogued lots, and although plenty of those have been withdrawn, the likes of Fort Myers and Royal Dornoch are still present.

Those unable to attend Park Paddocks in person have a range of available methods for purchasing in absentia, primarily Tattersalls' online platform and through the telephone bidding function.

Tattersalls chairman Edmond Mahony said: "The unique diversity of the Tattersalls Autumn Horses in Training Sale is key to its enduring appeal to both domestic and international buyers.

"Every year the sale produces top-class Flat and National Hunt performers, and this year's catalogue has all the ingredients to appeal to the customary global audience.

"We've already seen our live internet and telephone bidding facilities widely embraced, particularly at the recent July and August Sales, and will continue to explore every possible avenue for buyers to participate at all of our sales despite the prevailing challenges."

FIRST PUBLISHED 1:45PM, OCT 25 2020
The sale has not only become a consistent source of global Group 1 success, but has also set in motion some genuine rags-to-riches stories