Magic Wand waves away her Ribblesdale rivals with impressive display 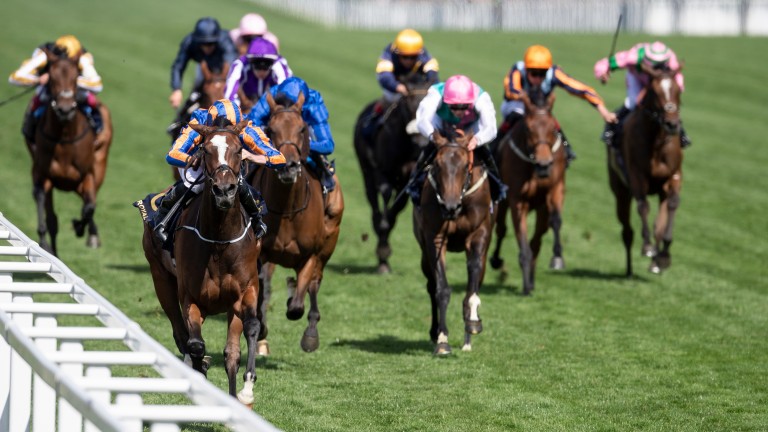 Magic Wand races away with the Ribblesdale Stakes and confirm herself a significant broodmare prospect
Edward Whitaker
1 of 1
By Mark Scully 5:14PM, JUN 21 2018

Magic Wand had the pedigree and price tag but now she is putting together the kind of racing record that establishes her as a broodmare prospect of the highest order, capable of taking high rank among Coolmore's incredible band.

Already a Listed winner courtesy of her Cheshire Oaks success in May, the daughter of Galileo followed up her Oaks fourth with Thursday's four-length success.

The win sets up the possibility that Magic Wand could now bid to emulate her closely related sister Chicquita and add a Classic to her CV in next month's Darley Irish Oaks at the Curragh.

Bred in partnership by Ecurie des Monceaux and Lady O'Reilly's Skymarc Farm, Magic Wand's performances on the track are quickly tallying with her impressive pedigree and hefty price tag.

Out of the Listed-winning Dansili mare Prudenzia, she cost owners Coolmore and Markus Jooste €1.4 million at the Arqana August Yearling Sale in 2016, the highest price at that particular auction.

The purchase speaks volumes about how highly Coolmore value the breeding potential of Magic Wand's pedigree, as does the fact they went to €6m at Goffs for Chicquita in 2013.

A Classic win would represent another significant piece of the puzzle should she get the chance next month and of course, being by Galileo only serves to aid her chances of doing just that.

The perennial champion has already sired the winner of the Irish Oaks twice, most recently with Seventh Heaven in 2016 and before that with Great Heavens in 2012.

With Coolmore having expanded their horizons globally as they seek the best stallions around to cover their string of talented Galileo mares, Magic Wand surely now boasts the type of profile that could see her shipped to somewhere like Japan's Northern Farm to visit Deep Impact when her racing days are done.

Star performers including Minding and Winter have been covered by the Japanese star this year, who was handed a breakthrough British Classic success earlier in the year by his son Saxon Warrior, himself out of Galileo mare Maybe.

Coolmore pursuit of Deep Impact pays off with 2,000 Guineas success

Gavin Cromwell planning Breeders' Cup date for Queen Mary star Quick Suzy 'There are no negatives' – 35-race Royal Ascot is a permanent fixture 'Hopefully he's not finished yet' - Rohaan continues his remarkable rise Doyle Force: Creative rider off the mark for the week as Appleby bags a 1-2 A day when two big decisions had to be made - officials at Ascot got both right Did the stewards get it right in the Commonwealth Cup? Experts have their say