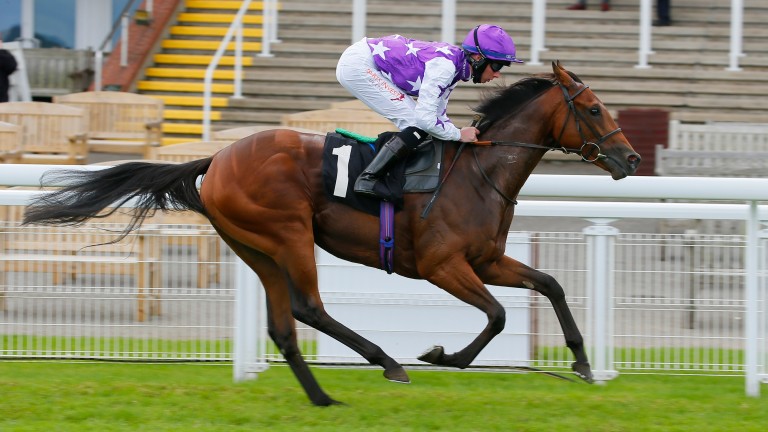 Lullaby Moon stepped up on her previous Listed success to give the high-flying first-season sire Belardo his third individual Group winner when striking in France on Saturday. The victory equals the mark of Pride Of Dubai among leading freshmen on individual Pattern winners.

Trained by Ralph Beckett, the two-year-old daughter of Darley's Belardo was bred by Bearstone Stud and was a 16,000gns purchase by GB Horseracing and Dan Tunmore from Book 2 of the Tattersalls October Yearling Sale last year.

Successful on her first run for Beckett at Goodwood on her third start, having won on her debut for Joseph Tuite and then having one run for Michael Bell, Lullaby Moon picked up black type when third in the Firth of Clyde Fillies' Stakes, before readily winning the Two-Year-Old Trophy at Redcar.

The Kildangan Stud-based Belardo, a son of Lope De Vega and the seventh foal out of the Danehill mare Danaskaya, hails from the family of Kistena, the winner of the Prix de l'Abbaye, and currently stands for a fee of €10,000 in Ireland. He has sired the winners of 15 races and more than £282,876 in prize-money.

Lullaby Moon is out of Bold Bidder, a half-sibling to the stakes-placed pair of Better Built and Right Answer, and therefore related to four winners including the five-time winner Celebration, by Equiano, and the Raven's Pass colt Brenner Pass.

Belardo proved a top-class two-year-old, winning the Dewhurst by two lengths on his final start of the campaign to be crowned European champion juvenile, and he landed another Group 1 when taking the Lockinge Stakes at four.