Ciaron Maher and Coolmore join forces for A$900,000 purchase in Melbourne 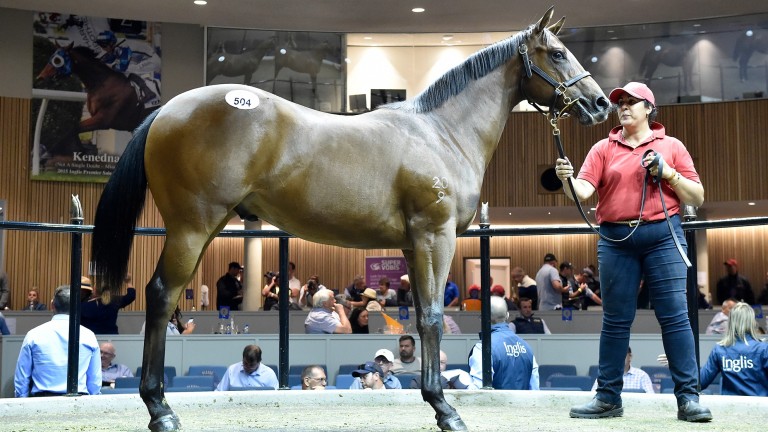 Ciaron Maher believes the rise of the Inglis Melbourne Premier Yearling Sale is a sign of things to come for a Victorian breeding industry in the midst of a reinvigoration after the prominent trainer leaned on an international powerhouse in order to buy a Lord Kanaloa colt for $900,000 (£500,000/€579,000) on day two of the Melbourne auction.

After a Written Tycoon colt made $1.1 million on Sunday, only the second horse to sell for seven figures in the Oaklands Junction’s sale’s history, 20 yearlings made $300,000 or more on Monday, bringing the total to 35 for the sale so far.

Nine of the top ten-priced yearlings have been colts, with the most expensive of those on Monday being the Lord Kanaloa colt who co-trainers Ciaron Maher and David Eustace bought in partnership with Coolmore. The dual-state trainers already train this season’s Inglis Nursery winner Acrobat for Coolmore, among others.

With a strong working relationship already in place, Maher and the Coolmore team agreed to team up on the session-leading colt after both parties assessed him on the sale grounds late last week.

"I saw the horse up at Kulani and they did a great job preparing horses for the sale and he presented beautifully," the leading trainer said.

“He has got a beautiful temperament. There was a horse playing up out the back next to him and he just went about his business.

“That is something that is very important in colts. You want them to go on and be stallions and I think he’s got the necessary characteristics to do that. [A horse’s temperament] is a bit of an insight into how they handle pressure.

“I know they are only young and walking, but you see them on the farm and you see them again when they first get to the sale, and again when they have been out of their stables a lot of times, particularly the popular ones, so you can see how they react to that little bit of pressure.”

He added: “It was great to purchase another colt like this with Coolmore. We’ve had the likes of Merchant Navy and some other really nice horses through the stable. We’ve got Loving Gaby’s sister as well out of Magic Millions, so they are great to race with and hopefully we can find the next Coolmore Stud Stakes or Royal Ascot winner.”

Offered by Kulani Park on behalf of Arrowfield Stud as lot 504, the colt is the first foal out of ATC Sweet Embrace Stakes winner Believe Yourself.

Kulani Park’s Rhys Smith had previously rejected overtures from Arrowfield to sell yearlings on their behalf, but took on the opportunity for the 2021 sale.

“Paul [Messara] had approached me a few years ago and we wouldn't do it then, but we decided it would be a good idea to do it this year,” Smith said after the sale of the Lord Kanaloa colt.

“He's a great colt, a really early horse, good muscle and did everything right and looked a treat. He did over 200 parades, which is a lot of parading, and Coolmore has bought him, so obviously they’ll look to win an early race and get him to stud.

"He's going to get every chance and I think Ciaron is the right trainer for him. Whether it be in Melbourne or Sydney, I'm sure he'll be in those early two-year-old races."

Congrats to Kulani Park and all involved in the $900k sale of this striking Lord Kanaloa x Believe Yourself colt! (Lot 504) @cmaherracing #InglisPremier pic.twitter.com/1Ij6FvNeeK

Signing under the Ciaron Maher Bloodstock banner, the trainer has bought 16 yearlings with various parties so far this week and he described the sale as “very solid”.

“You have got to do your homework and the horses you like, you have to always go a bid or two more,” he said.

“It’s always quite strong here in Melbourne and the studs like Arrowfield have a draft through Kulani Park supporting the Victorian breeding industry. That is great and I think the sale is getting stronger and stronger each year.

“There are also more and more Victorian breeders and you’ve got the likes of Toronado and Written Tycoon, who was standing here, Rosemont is expanding and getting more active, so it is really bright for the future of Victoria.

“It has always been second fiddle to the Hunter (Valley) but it’s certainly improving each year.”

While Maher and Eustace maintained their spot at the top of the buyers’ podium, fellow Victorian training partnerships Robbie Griffiths and Mathew de Kock and Lindsay Park have also been active, buying eight yearlings each, while Caulfield-based Clinton McDonald and agent-trainer brothers Paul and Mike Moroney have also each signed for eight yearlings.

Speaking on Monday night, Inglis general manager of bloodstock sales and marketing Sebastian Hutch described the proceedings at the Premier sale so far as a “sterling two days”.

"The Lord Kanaloa colt, anyone that saw him was particularly taken aback by him. He is a beautiful colt by a fabulous stallion which has already bred a Blue Diamond winner out of a mare that had elite ability as a two-year-old.

"It was exciting to get him into the catalogue and then for him to measure up the way he did was great, and the competition on him was ferocious."

FIRST PUBLISHED 3:42PM, MAR 1 2021
You have got to do your homework and the horses you like, you have to always go a bid or two more