James Thomas reports as strong trade continues after the Orby 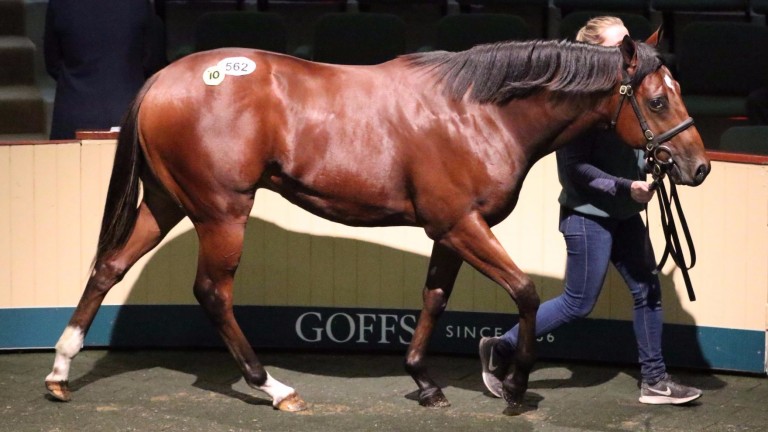 The heavy hitters may have left town, but there was no shortage of sparring during the Goffs Sportsman's Sale on Thursday and the one-session auction ended with all market indicators having improved from last year.

At the head of affairs was a colt by Lope De Vega offered by Croom House Stud, who went the way of pinhooker John Cullinan, bidding from the top tier of the auditorium, for €130,000.

"He looks a good, solid horse," said Cullinan. "Lope De Vega is a proven sire and the mare has got off to a flyer, so hopefully he can gallop! He's been bought for myself and Roger Marley."

The colt came to the sale with a significant update, as his Scat Daddy half-sister is dual winner Special Purpose, who had finished a close third behind Anna Nerium in the Group 3 Dick Poole Fillies' Stakes since the publication of the Sportsman's catalogue.

"It's a big price for a breezer but he's the standout here today," noted Cullinan, who added that six-figure purchases being bought to go breezing was a sign of the times.

"The profile of the breeze-up horses has been improving," he said. "The breeze-up consignors have actively been trying to buy better horses, and that shows in the results in both the sales ring and on the racecourse.

"There are proper professionals at the breeze-up game now and the standard of horse is so much higher. It was a clearing house for unsold yearlings at one time, but the proof of the way it's gone is on the racecourse. They're not one-trick ponies anymore, there's horses with a lot more scope; the first and second in the Leger last year were breeze-up horses, as was French Derby winner The Grey Gatsby."

The sole offspring of Pivotal on offer generated enough sparks among the bidders to light the sales complex, as a bidding war broke out for Lumville Farm’s filly by Cheveley Park Stud’s wonderful sire.

As bids flew in from all angles, the price climbed ever higher until Johnny Hassett won the day with a bid of €75,000 for the bay out of the Kingmambo mare Ebtisama.

Bred by Shadwell Estates, the filly is a sister to a winner this year and a granddaughter of Nell Gwyn Stakes winner Misterah.

She will join the Gregorian colt Hassett bought earlier in the day for €24,000 in preparing for spring’s breeze-up sales, but the buyer admitted the winning bid was to be his final one as he had reached the limits of his syndicate’s budget.

“The filly is a lovely individual and if she breezes well then I think she could have a high resale value. She looks to be an improving type and a filly that will be very fast. Pivotal is a class act and I hope she will be another.”

BBA Ireland, who finished the Orby Sale as leading purchasers by aggregate - with €4,373,000 spent on 41 yearlings - were straight back into action on Thursday.

Among the operations acquisitions was a filly from the first crop of Australia, whom BBA's Michael Donohoe went to €62,000 to secure on behalf of Chinese owner Zhang Yuesheng, who campaigns his horses under the YuLong Investments banner.

The filly, offered by Camas Park Stud, is out of the Storm Cat mare Muneefa, making her a half-sister to Listed winner Leamington and the Grade 2-winning Bauble Queen.

"There's plenty of residual value with that pedigree," commented Donohoe. "She's very racy and will stay in training in Ireland. Zhang is a fan of Australia and is keen to support Coolmore sires as they provided sponsorship to his racecourse in China. He'll have a good number of horses in training in Ireland next year to reciprocate the support he's received from Irish companies."

Later in the session BBA Ireland also signed for a Dream Ahead filly from Mount Eaton Stud at €85,000.

For yearlings bred from a stud fee of just €5,000, the first crop of Bungle Inthejungle have enjoyed some noteworthy returns throughout the sales season, and there was a pair of ringing endorsements for the sire's fillies during Thursday's session.

First, Matt Coleman went to €52,000 for a half-sister to the Listed winner Audacia offered by Maurice Burns' Rathasker Stud.

"She looks like a very fast filly," said Coleman. "She has a big backend and is a lovely walker, Madeline Burns told me she is the fastest filly across the paddocks at Rathasker Stud.

"Hopefully she will turn into a Royal Ascot filly - she has a good pedigree that is full of fast horses. Her temperament is great too, and I bought Jadanna [Cherry Hinton third and dam of Group 3-placed two-year-old Darkanna] from the Burns' family, so we've been lucky with Rathasker horses before."

Later in the session Clive Cox, bidding through Merrick Francis, went to €55,0000 for a Bungle Inthejungle filly from Vinesgrove Stud. The March foal, out of an Authorized half-sister to the Group 2 winner Talismanic, is a half-sister to Godolphin's Group 3 Prix des Chenes winner Stage Magic.

Having sold Norfolk Stakes winner Prince Of Lir there looks a fair chance that crack breeze-up consignor Con Marnane knows a good Kodiac when he sees one. And having parted with €50,000 for a colt offered by Tally-Ho Stud as evening set in he may well have just unearthed another future star.

"He's a lovely horse," said Marnane of the March foal, who is out of a half-sister to Group 1 Criterium International winner Zafisio.

"I've been so lucky with Kodiac in the past, this colt looks a real runner. He's out of a Red Clubs mare too, which is a positive. He'll head to the breeze-up sales and I'll tell you if he's good value in April!"

There could well be celebrations on the way for Marnane after the weekend's racing action, with three of his most notable graduates set to contest major races, namely Middle Park Stakes contender Sands Of Mali; Robin Of Navan, who is due to line up in the Group 2 Prix Dollar; and Cheveley Park Stakes hopeful Different League, who carries the colours of Marnane's wife Theresa.

Goffs' decision to reduce the Sportsmans’ Sale in half for this year’s edition was justified by the numbers at the end of the solitary day of trading.

Group chief executive Henry Beeby noted: “When compared to the full sale last year we have made huge gains with the average and median advancing by 26 per cent and a whopping 45 per cent respectively, but the progress versus the first day in 2016 is also noteworthy.”

Comparing Thursday’s sale with Part 1 of the 2016 Sportsman’s Sale showed more modest gains than when examined against last year’s sale as a whole, but the increases were on a similar level to the Orby Sale over the previous two days.

The clearance rate of 85 per cent was up by four percent from last year with 274 horses offered for sale and 232 of them finding new homes.

This year's turnover of €4,834,500 showed growth of five per cent from the total posted for Part 1 of the 2016 sale, while Thursday’s top price of €130,000 was the highest since the Sportsman's Sale was reintroduced by the company in 2012, after a four-year hiatus.

Such results have added to the determination of the Goffs team to continue to move the sale further in its current direction.

“We will continue to work with breeders and consignors to develop the Sportsman's as the natural alternative to Orby for the strong commercial type,” Beeby stated. “Especially given the strong international interest that has been so evident throughout the day with buyers from so many countries competing with a large number of British trainers, several of whom came specifically for today.”