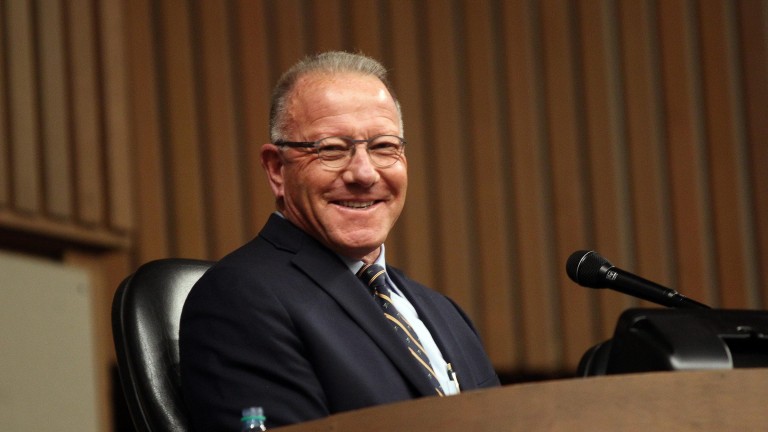 Cris Caldwell: sold millions of dollars-worth of stock at Keeneland
Keeneland
1 of 1
By Bloodhorse Staff 12:36AM, MAY 17 2020

Cris Caldwell, notable auctioneer and loving father of two children, died on Friday after a battle with pancreatic cancer. He was 63.

Born February 14, 1957, in Upland, California to Tom and Mary Caldwell, he started his auction career at the age of 16 at Maclin Caldwell Auction Company in Chino, California, selling everything from furniture to horses five days a week.

In 1975 he joined the Keeneland auction ranks under his father. He would go on to sell hundreds of millions of dollars worth of horses during a 45-year tenure that concluded with the 2020 Keeneland January Horses of All Ages Sale.

At home in Oregon, Caldwell was crucial to many farm and charity auctions, always giving back to the community in any way possible.

Caldwell had a passion for ranching and the western way of life. That passion was instilled in his girls, Alden and Laurel, who continue his legacy as a fourth-generation rancher and budding veterinarian, respectively.

An avid athlete and daredevil, Caldwell's life was full of notorious hunting, skiing, and road cycling stories. He is best remembered for his quick wit, booming voice, and his kind and compassionate spirit.

Cris is preceded in death by his father, Tom. He is survived by his mother Mary, children Alden and Laurel, his brother Scott, sisters Georgeanna and Karen, and several cousins, nieces and nephews.

In a statement, Keeneland president and CEO Bill Thomason remembered Caldwell, who carried on his father's legacy and worked for many years alongside his brother from the Keeneland auction stand.

"Cris was known for his work ethic, keen wit, and, like his father, his ability to command the sales ring, and he presided over some of the most memorable events in Keeneland sales history," he said.

"Within approximately three hours at the 2006 September Yearling Sale, he was the auctioneer for both Meydan City, who brought an auction-record $11.7 million, and Plavius, who sold for $9.2m.

"At the 2007 November Breeding-Stock Sale, Cris sold Playful Act for a record $10.5m, and in 1989 he sold Kentucky Derby winner and future Hall of Famer Winning Colors for $4.1m.

"Keeneland extends its sincerest condolences to Cris's brother, Scott, also a longtime member of Keeneland's auction team; his daughters Alden and Laurel; and his entire family. He will be greatly missed."

FIRST PUBLISHED 12:36AM, MAY 17 2020
Cris was known for his work ethic, keen wit, and, like his father, his ability to command the sales ring