Lloyd Kennewell arrives at top table as he lands A$1.7m I Am Invincible colt 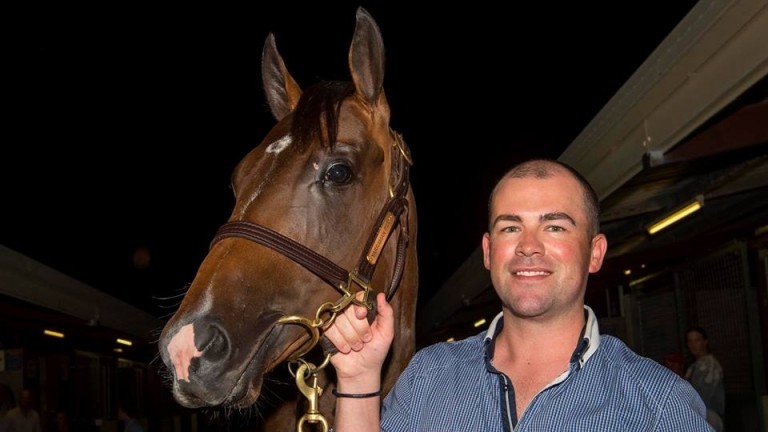 Group 1-winning trainer Lloyd Kennewell’s rise to prominence as a major player in Victoria hit new heights at the Magic Millions Gold Coast Yearling Sale on Saturday when he purchased a colt by I Am Invincible for A$1.7 million (£955,500/€1,070,500), outlasting the might of Godolphin in the process.

The price eclipsed the A$1.6m figure paid for a Redoute’s Choice colt on day one and became the highest-priced lot sold at the season-opening 2019 yearling sale, which set a new record for book one with an aggregate of A$169,545,000 for the second year in a row.

Among the partners set to race the colt are Aquis Farm and prominent owner Ozzie Kheir along with clients of Group One Bloodstock’s Matthew Becker.

Kennewell - the trainer of dual Group 1 winner Viddora, who is also by the Yarraman Park-based stallion - was determined to make his mark in the sales ring as he continues to build his new Melbourne base that was established last August.

"He's one of the best colts I’ve ever seen by I Am Invincible, and hopefully we can get that right result with him,” said Kennewell, who admitted to being nervous leading up to the auction.

“I was a bit toey tonight knowing we wanted that colt. We put a really good crew together in the last three days to do it. I've never done one that has made a million, but this was the one we wanted.”

Catalogued as Lot 869, the Steve Gillard-bred colt is the second foal out of the Group 3 winner and the Magic Millions 2YO Classic runner-up Oakleigh Girl, who is herself a daughter of Oakleigh Plate winner Miss Kournikova.

“We thought A$1.5 million was about the money but you don’t want to lose a horse like that for one bid,” Kennewell said.

The trainer added that Becker was in his corner when he identified the colt as the one they wanted.

“We've been family friends for a long time and we have got together finally in the last 12 months,” he said.

“We both agreed on this one, we pulled the guys together to get it, and it has worked out because he's going to be one of my big supporters as a bloodstock agent.”

WinStar delighted to be Down Under

Elliott Walden, the chief executive of US operation WinStar Farm, said the Australian racing and breeding market offers the greatest trading opportunities in the world and the operation furthered its relationship with Newgate Bloodstock and China Horse Club, teaming up with them to secure a colt by I Am Invincible last night.

The Segenhoe Stud Australia-consigned colt, who was catalogued as Lot 799, was popular with big-name stallion syndicates. However, the trio were eventually able to beat out the competition, which included James Harron, to land the winning bid of A$900,000.

“Henry has put a great team together and we have done a lot with SF Bloodstock in America going back to Super Saver, who was the first horse they ever owned, and we have had a really good run with Justify, Audible and others,” Walden said.

“It has been a really good relationship [with SF Bloodstock] and that is what spurred the relationship with Henry in the south.

“We probably wouldn’t be doing it if we weren’t. I know we are in good hands at Newgate with Henry.

“It is a very hands-on business and you can’t do it from 6,000 miles away so you have got to have someone who knows what they are doing and that you can trust.”

Saturday's addition to the stable of colts for the partnership is the sixth foal out of Group 2 winner and Magic Millions 2YO Classic winner Mimi Lebrock, who is a half-sister to Group 3 winners Heavenly Thought and Shoko.

“Henry looks at them on the farm, and I didn’t have that luxury, but he said that the colt has changed a lot in those three weeks,” Walden said.

“For me, he just looked like a horse who was athletic and well balanced but also was a later foal who could turn inside out as he got older.”

Segenhoe Stud Australia general manager Peter O’Brien had also been impressed by the son of I Am Invincible’s development.

“The two brother-in-laws were bidding against each other, Henry Field and James Harron, who are two highly respected judges and I am delighted for the Newgate-WinStar partnership and wish them every chance of success,” O’Brien said.

“He's a beautiful colt who just keeps improving every day of the prep.”

China Horse Club and Newgate Farm ended Book 1 having bought 12 yearlings, who they purchased for a total spend of A$5,320,000.

Stonestreet Farm’s A$900,000 investment in star juvenile and dual Group 1 winner Miracles Of Life in 2014 returned its biggest dividend to date last night when US owner Barbara Banke sold her second foal for A$1m at Magic Millions on Saturday.

The Medaglia D’Oro filly was purchased for the seven-figure sum by Godolphin just hours after winning the A$2m Magic Millions 2YO Classic with another Gold Coast purchase in Exhilarates.

Catalogued as Lot 802, just three lots after another high-priced sale of A$900,000 I Am Invincible colt was sold, the Coolmore Stud-consigned filly was the tenth A$1m lot of the sale.

"It's an honour to be entrusted to sell such a magnificent filly for Barbara Banke's Stonestreet Farm and we wish Godolphin the very best of luck with her in the future,” said Coolmore’s Tom Magnier.

“Stonestreet are synonymous with the production of quality bloodstock throughout the world, and it is great that they have been so well rewarded here tonight."

Miracles Of Life won the 2013 Blue Diamond Stakes before going on to win the 2015 Robert Sangster Stakes at Morphettville, 11 months after Stonestreet Farm bought the mare at the Magic Millions Gold Coast National Broodmare Sale.

Miracles Of Life, who was trained by Peter and Paul Snowden when Stonestreet Farm purchased her, was the first horse he had purchased in Australia.

Later in the session, Stonestreet Farm’s bloodstock agent John Moynihan reinvested their sale proceeds from the Medaglia D’Oro filly by going to to A$875,000 for a Not A Single Doubt sister to Group 1 winner Secret Agenda.

Offered by Arrowfield Stud as Lot 853, the filly is the tenth foal out of the unraced mare Negotiate, who is also the dam of Group 3-placed Sweetener.

Moynihan said there was plenty of style about the filly to match her top-class pedigree.

“She is really good looking, she is pretty, looks like she will be early and is a full-sister to a Group 1 winner,” Moynihan reported.

The filly is expected to be trained by the Snowdens and she will be eligible for next year’s A$500,000 Magic Millions women’s owners bonus.

The top end of the market remained incredibly strong with 11 seven-figure lots sold at this year's Gold Coast Yearling Sale, while the average of A$239,809 was up on last year’s A$228,000.

Another sign of strength was the fact that the median remained at A$170,000, which is on par with last year.

“[Magic Millions] is a seriously big sale. Our vendors have come here and wanted to meet the market, it is a genuine sale, and the buyers have bid confidently from start to finish,” Magic Millions managing director Barry Bowditch said.

“It has been a sensational four days’ trade and thought tonight’s atmosphere was electric.”

The return of Angus Gold, Stonestreet Farm and numerous other international buyers, along with a low Australian dollar, helped boost the strength of the buying bench.

“We had all the key players here in our mind. We had Angus Gold, we had Godolphin, a good Hong Kong contingent, we had Barbara Banke, we had WinStar and Jon Kelly,” Bowditch said.

“There was a great spread of them. They all got in and played a part without dominating the market, which was fantastic.”

Bowditch praised his Magic Millions team for the hard work leading up to and during the record-breaking sale.