Littlelordconford aims to mirror the speed of big brother Battaash

The son of Intikhaab debuts at 6.45 at Lingfield on Saturday 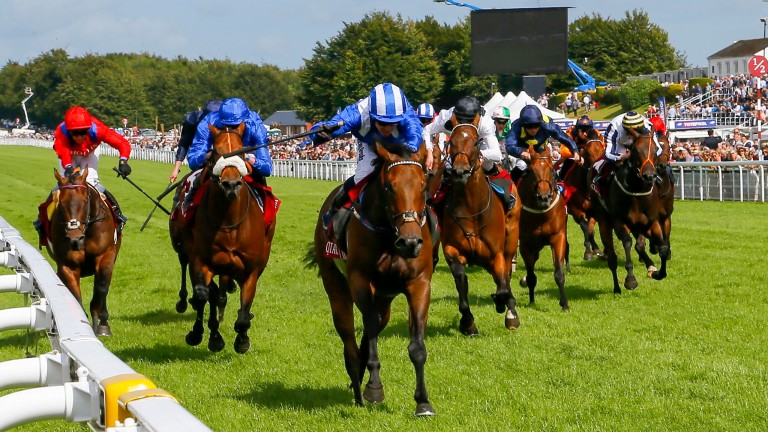 Goodwood’s soft turf was unable to dent the blistering speed of Dark Angel’s Battaash as he ran away with the 5f King George Stakes on Thursday. In winning this Group 2, he confirmed the promise he showed in the Group 3 Coral Charge, when breaking the five furlong record at Sandown.

Both of these wins came over the minimum distance and on Saturday, Littlelordconford, an Intikhab half-brother to Battaash, will hope to mirror his sibling's speed as he debuts over the same trip at Lingfield.

Representing Richard Spencer and Rebel Racing - the same connections as Coventry scorer Rajasinghe - the juvenile is the only debutant in a field of five set to contest the Core Group EBF Novice Stakes at 6.45.

Littlelordconford is the second foal out the Lawman mare Anna Law and he is bred, like his illustrious half-brother, by Ballyphilip Stud. They sold him for £40,000 to Bobby O’Ryan and Rebel Racing at the Goffs UK Premier Sale in 2016.

That sum was just a fraction of the 200,000gns Shadwell were stretched to a year earlier at Tatterstalls Book 2 to secure Battaash.

Littlelordconford is from the penultimate crop of former Derrinstown stallion Intikhab. The son of Red Ransom succumbed to a heart condition in May 2016.

His progeny includes Group 1 winners Red Evie - dam of Found - and Snow Fairy, whose oldest offspring is the two-year-old Elusive Pimpernel filly Belle De Neige who is in training with Ed Dunlop.

Littlelordconford’s dam Anna Law was unplaced in four starts but she is a half-sister to the Selkirk colt Etlaala, a winner of the Group 2 Champagne Stakes, and the dam of Duke of York Stakes winner Tasleet.

Like Etlaala and Battaash, Tasleet is also owned by Sheikh Hamdan.

By 6.50 tomorrow, the Shadwell operation will know whether they made the right decision not to recruit the latest runner from a family that has served them so very well.

Late plunge pays off as Cieren Fallon and Oxted lower colours of Battaash 'I'm looking for a big show from him - he's a serious each-way player' Connections look to Goodwood with Battaash after 'leg-weary' Royal Ascot fourth Can Battaash make it six out of six first time out? Graeme Rodway gives his view Glad rags on and star runners aplenty as Royal Ascot opens up to thousands One trainer, one jockey, one horse and one race to note on Royal Ascot day one