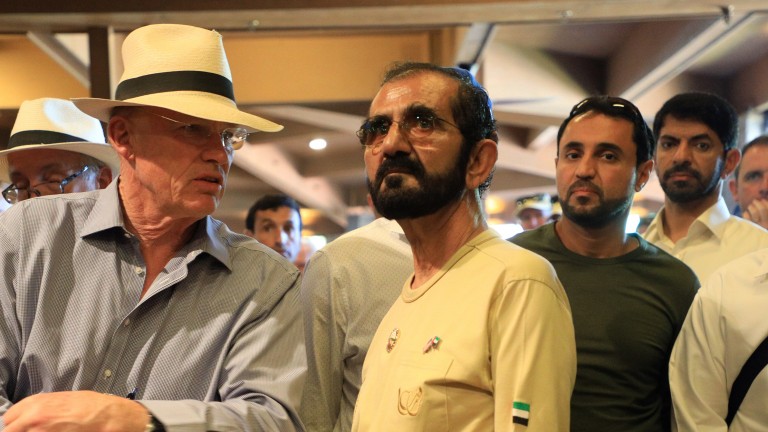 Sheikh Mohammed has been one of the driving forces of a busy Keeneland Book 1
Keeneland photo
1 of 1
By Michele MacDonald 1:09PM, SEP 11 2019

Less than two months ago in late July, Sheikh Mohammed celebrated his 70th birthday, yet based on his determined bidding during the Keeneland September yearling sale, he is pressing forward energetically rather than slowing down.

Sheikh Mohammed and his brother, Sheikh Hamdan bin Rashid al Maktoum, have been the driving forces behind this year’s sale through the initial two sessions of the three-day Book 1.

With Sheikh Mohammed leading the way and buying the current sale-topping Curlin colt for $4.1 million on Tuesday after a long duel with Coolmore, memories of days gone by have swirled through the
pavilion.

It was a hundred a pop," exclaimed Keeneland vice president Bob Elliston in describing the $100,000 bid blasts from both sides over the colt consigned by Eaton Sales for Stonestreet Farms.

"When I heard that, I thought, 'this sounds like the old days,’ and sure enough it was. It was Sheikh Mohammed against the Coolmore gentlemen, a great battle that Sheikh Mohammed ended up taking.

"It felt like 2004 and 2005 in the days when the market was really incredible," Elliston said.

Godolphin agent Anthony Stroud revealed that Sheikh Mohammed guided him to continue bidding until the colt was secured.

When asked what qualities the colt possessed that encouraged such determination at such a high price, Stroud paused for a moment and then focused his comments on the man he - and others in the
large retinue around the Dubai ruler - have long called simply 'The Boss'.

"I think the love of horse racing and the hope of finding a champion," Stroud said of Sheikh Mohammed’s unwillingness to be outbid. "And he loves the sport. He loves coming to America and he loves Keeneland. For all those things, that’s why he’s doing what he’s doing."

Through the first two sessions of Keeneland’s three-day Book 1 and with Sheikh Mohammed at the helm, Godolphin had bought six yearlings for a total of $13.25 million to lead all buyers by gross. With
the Curlin colt and a $2.9 million War Front colt swelling the figures, the Godolphin purchases averaged a little over $2.2 million. 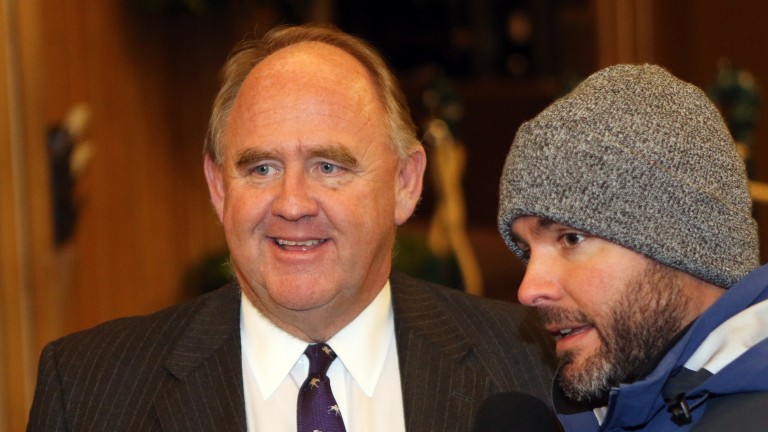 Sheikh Mohammed's presence has been warmly welcomed by Keeneland's Bob Elliston
Photos by Z/Keeneland
Sheikh Hamdan’s Shadwell Estate Co. ranked second to Godolphin in terms of total spending. Shadwell had bought a dozen yearlings in the first two sessions for a total of $7.67 million and an average of $639,167.

Added together, the Maktoums’ spending had already crested to $20.92 million, a figure that represents 22% of the overall sale gross proceeds of $95.381 million through the first two sessions. And
if the past is any indication, there could be more to come.

Meanwhile, during those years when Godolphin was not very active, the overall state of the Keeneland market was not as healthy. For example, even though Shadwell was the leading buyer with $10.75 million in acquisitions in 2016, the year before John Ferguson would depart as Sheikh Mohammed’s key advisor, Godolphin spent only $2.245 million, all under Ferguson’s name.

Sheikh Mohammed appears intent on returning to an earlier style that led to him acquiring horses like UAE Derby winners Essence of Dubai and Blues and Royals at Keeneland.

In 2006, he was having so much fun at the world’s largest yearling sale while buying horses including the $11.7 million Kingmambo colt that would be named Meydan City that he laughed with acquaintances and playfully swatted them with his sale catalogue.

He has had much the same demeanor this week, greeting old friends and shaking hands with many of the breeders whose lives he has changed with his purchases over the decades since he first began buying in the 1980s.

In words that could be spoken by dozens of consignors and breeders, Elliston said on Monday: "We certainly enjoy having him on the grounds," adding how fortunate it is when The Boss sees some horses
that he likes "really well".