Bloodstock Latest SALE OF THE CENTURY 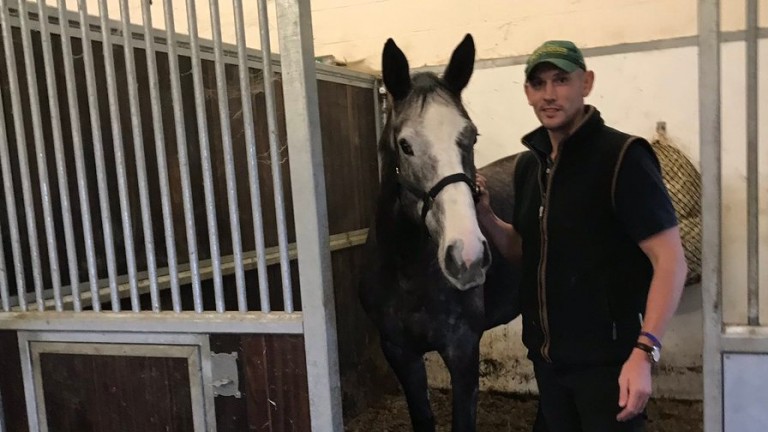 Small breeder Adam Wragg is set to turn a monumental profit after unearthing Fly To The Top, an unraced four-year-old Mastercraftsman half-sister to Friday's Oaks heroine Anapurna, for the derisory sum of £2,500 at a bread and butter Tattersalls Ascot Sale last November.

Wragg, who owns Carlton Stud on the Leicestershire/Warwickshire border with his father Graham, is now being inundated with big-money offers for the Meon Valley Stud-bred mare who is in foal for the first time to Mukhadram.

The Wraggs bought the farm seven years ago and breed to race, with most of their stock sent into training with Peter Niven or leased to Jamie Snowden, such has been the case with the exciting Listed-placed bumper mare Shantewe.

Among the mares in their string are two daughters of the late smart staying chaser Posh Bird as well as Undulate, a daughter of Three Valleys who became a first winner for the owners after being bought from a Juddmonte dispersal for £3,500.

Explaining why he added Fly To The Top to the herd – the only mare purchased for the stud last year – Adam Wragg says: “We were looking for a new producer and had browsed through some catalogues, and I said to Dad we needed to go to Tattersalls down at Ascot as I'd seen a cast-off from Meon Valley Stud on offer. 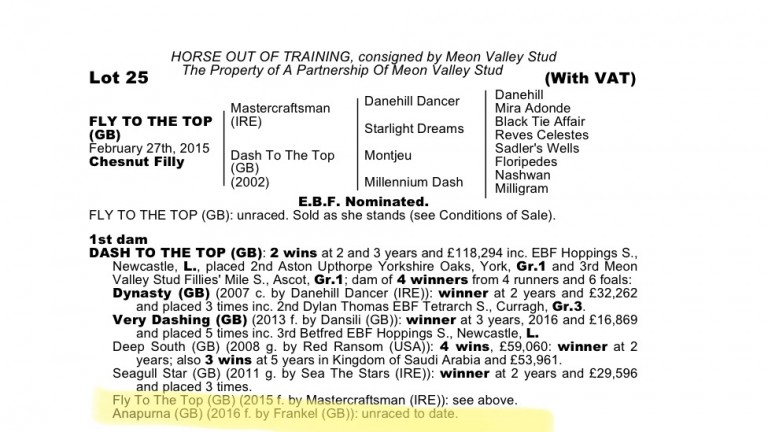 Fly To The Top's catalogue page as it appeared last November

“I was hoping to find some strong bloodlines – she certainly stood out on that score – and then I noticed Anapurna on the page, her sister by Frankel who was two then and unraced. Being by Frankel I hoped she'd be good.

“So I went to the auction and didn't even look at another horse all day. I had a fair bit more money in my pocket to buy her but just didn't need it. We brought her home, sent her to Mukhadram and she got in foal on the second cover.”

In case you were wondering how Fly To The Top cost just £2,500 despite being by Mastercraftsman out of Yorkshire Oaks second Dash To The Top and hailing from Meon Valley's outstanding One In A Million dynasty, Wragg adds: “She's not perfectly correct by any means, but operating on my budget you have to take a chance on that. My gamble was that with those lovely bloodlines the pedigree would come through, and that her Frankel sister might provide some nice updates.”

Wragg's purchase wasn't immediately vindicated and he admits there was a hairy moment when Anapurna made her debut a month after the sale.

“When I saw her finish a well beaten ninth first time out at Wolverhampton I didn't dare tell my Dad!” he laughs. “It was some relief when she won impressively next time out at Lingfield.”

Wragg's phone has been ringing hot since Anapurna showed considerable class and courage to defeat Pink Dogwood at Epsom on Friday and although he is at pains to emphasise that he is not out to profiteer by flipping his bargain purchase, he concedes that he has been made offers he cannot refuse. 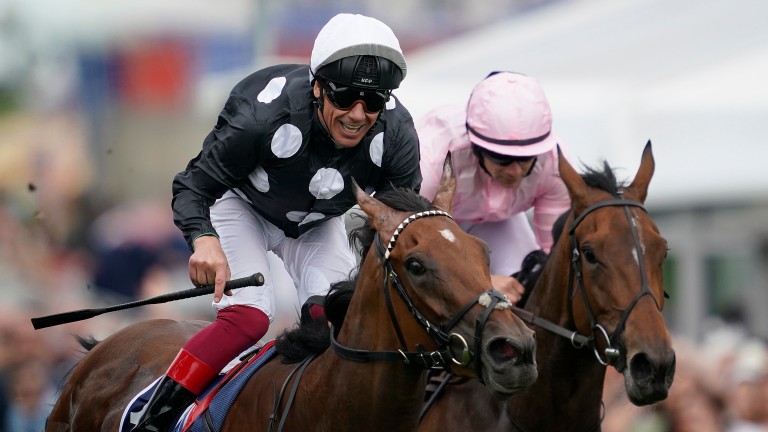 “I bought Fly To The Top hoping we'd be able to breed some nice Flat horses from her,” he says. “We breed to race, not sell; it's days out with the family watching the fruits of our labour on the track that make you want to get out of bed in the morning and do the horses, and sit up all night in foaling season. We live for racing the horses.

“In an ideal world, I'd love to keep hold of her, get a Mukhadram filly out of her to keep and race, and then sell the mare. But knowing how things turn out we'd end up getting a colt.

“We've been offered a life changing amount for the mare already. I'd genuinely love to keep her but with some of the big players sniffing around, it's only common sense to sell. We could reinvest the money in other mares or afford to put more of our young stock in training.”

The decision to part with Fly To The Top is also being informed by a case of once bitten, twice shy, as Wragg didn't accept a profit for one of his promising runners in the past and lived to regret it.

He says: “We had a horse with Peter [Niven] a few years ago called Atomix, who was second to High Bridge first time out at Catterick and scored at Musselburgh from one of Gordon Elliott's on his second run.

“I was offered £250,000 for him after that race, which I turned down, and then in the following season he developed wind problems and went on to do both his front tendons.

"Luckily the vets at Rossdales in Newmarket have performed miracles and we hope to have him back for next season but, still, you live and learn in this game.”

With Fly To The Top set to unexpectedly atone for the painful experience with Atomix, Wragg is unsurprisingly an enthusiastic exponent of Ascot sales.

“I bought another mare at Ascot called Merriment [a Makfi half-sister to Listed-placed Touchline] before,” he says. “She cost only £3,200 but won for us at Newcastle and is also in foal to Mukhadram. The sales there are massively underestimated sale in my opinion.

"I've been to all the bigger sales but I always set myself a budget and end up not being able to buy anything that I want. I have far more luck at Ascot.”

The next chance for bidders to find a beautifully bred mare on a budget at the Berkshire venue comes on Tuesday, when 196 lots are catalogued to go under the hammer.

A first for Frankel and the marvel of Meon Valley: Anapurna's breeding in focus

FIRST PUBLISHED 6:29PM, JUN 2 2019
I went to the auction and didn't even look at another horse all day. I had a fair bit more money in my pocket to buy her but just didn't need it

'It is heartening to see stallions who are so well cared for' ‘It’s been far from easy but it’s been enormously worthwhile’ The Racing Post Foal Gallery is back - so please keep firing in your photos! Death of 'very special man with immense passion' David Powell Exciting Dysart Dynamo doubles Punchestown celebrations for Eleanor Manning Whitsbury Manor Stud announces birth of first Sergei Prokofiev foals