The Redoute's Choice filly was a 725,000gns yearling 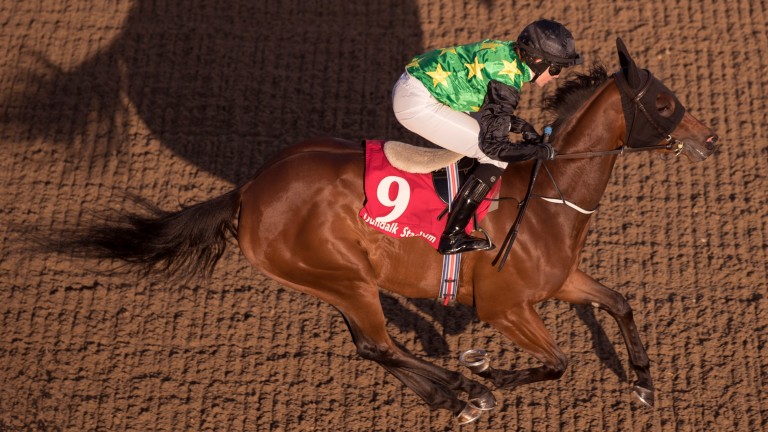 Smoulder: Ana O'Brien steers the three-year-old filly to success on her third outing
Patrick McCann
1 of 1
By James Thomas 12:24PM, MAY 11 2017

A little over two years after Legatissimo landed the first of her three Group 1 successes, her closely related half-sister Smoulder shed her maiden tag at the third time of asking in a 7f event at Dundalk on Wednesday evening.

The three-year-old filly, who is owned by South African Markus Jooste and the Coolmore partners, was always travelling smoothly for Ana O'Brien and quicked up smartly to win by a comfortable one and three quarter lengths.

Bred by Newsells Park Stud, Smoulder - a 725,000gns yearling purchase - is the fourth foal produced by Yummy Mummy, a Montjeu sister to the late Fame And Glory, a five-time Group 1 winner.

Yummy Mummy was bought by John Warren while carrying a Dalakhani colt, later named Another Cocktail, for 460,000gns from the 2009 Tattersalls December Mares Sale.

The mare's third foal proved to be Legatissimo, a daughter of Danehill Dancer who, having been bought by MV Magnier as a yearling for 350,000gns, went on to enjoy a hugely productive three-year-old campaign in 2015, winning the 1,000 Guineas, the Nassau Stakes and the Matron Stakes.

Yummy Mummy also has a two-year-old filly by Shamardal named Gumriyah, who was bought by Blandford Bloodstock for 870,000gns, and in 2016 visited Dubawi.

Smoulder is from the first northern hemisphere-conceived crop of antipodean superstar Redoute's Choice, who shuttled to the Aga Khan's Haras de Bonneval in 2013 and 2014.

His other northern hemisphere-bred representatives include the likes of the Wertheimer brothers' Group 3-winning filly Gold Luck and the Group 3-placed colt Spotify, and the promising maiden winner Eyes On Asha, who fetched €775,000 at the 2016 Arqana breeze-up sale.

FIRST PUBLISHED 12:24PM, MAY 11 2017
Yummy Mummy also has a two-year-old filly by Shamardal named Gumriyah, who was bought by Blandford Bloodstock for 870,000gns