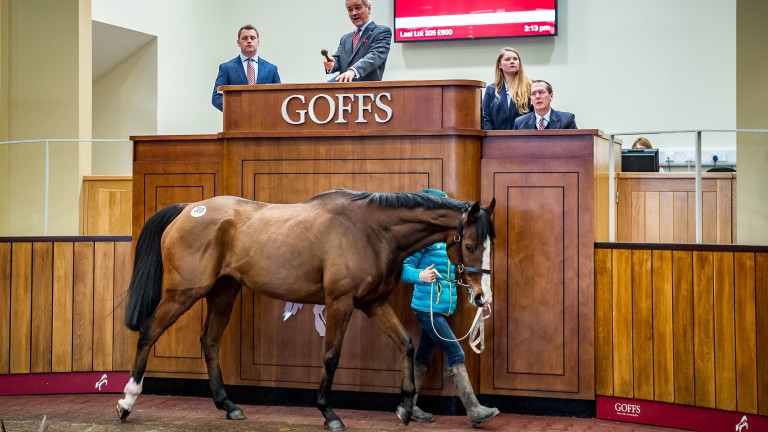 Classy racemare Legacy Gold topped the second and final session of the Goffs UK January Sale on Wednesday when snapped up by Eamonn Phelan of Derryluskin Stud for £100,000.

The nine-year-old daughter of Gold Well boasted six wins to her name under rules including a Listed victory in a bumper at Aintree in 2013.

Under the care of Stuart Crawford she finished third behind Vroum Vroum Mag in the Grade 1 OLBG Mares' Hurdle at last year’s Cheltenham Festival.

Out of the Durgam mare Durgams Delight, Legacy Gold is from the family of Grade 2-winning chaser Mossbank.

Phelan said: "I've bought her for a client of mine to become a National Hunt broodmare, we haven't decided on a sire yet but there's plenty of them including Champs Elysees, who's at Coolmore. We'll see and try and send her to the best.

"She was a proper racemare, she has lovely conformation and should make a good broodmare. She probably cost a little bit more than what we wanted to give for her but if you want a nice mare then you have to go to that money."

Just can’t get enough of Kayf

Stock by leading British jumps sire Kayf Tara dominated much of the day's proceedings, with the Overbury Stud resident responsible for seven of the top ten lots lots.

Kayf Tara’s flag has been flown by the likes of King George VI hero Thistlecrack, who is set to line-up in the Grade 2 Cotswold Chase at Cheltenham on Saturday, RSA Chase winner Blaklion and Champion Bumper scorer Ballyandy in recent months.

With those exploits and Overbury Stud raising his fee to a career-high figure of £10,000, buyers were quick to snap up his progeny in the ring.

The highest price spent on one of his yearling at the sale was the £66,000 paid by Aiden Murphy for a colt out of the Listed-winning Sir Harry Lewis mare Harringay who is from the family of Grade 1 novice-winning hurdler Pleasure Shared.

That wasn’t the only son of Kayf Tara that Murphy picked up as he also went to £52,000 for a colt from Robert Chugg’s Little Lodge Farm who is from the family of the Nigel Twiston-Davies-trained Cogry, and he later parted with £50,000 for a colt who is the first foal out of the winning Bollin Eric mare Rattlin.

Speaking about his purchases, Murphy said: “I came here to buy any Kayf Tara that I could and I’ve ended up buying three of them because he’s a serious sire. They were all seriously nice individuals too.”

Dick Frisby also went to £62,000 to secure a colt by the sire who had been crowned supreme champion at the Thoroughbred Breeders’ Association National Hunt Foal Show in 2016.

Out of the Grade 2-placed Slip Anchor mare Lago D’Oro, the colt is a half-brother to the multiple winner Spirit Of Shankly.

Frisby said: “He’s a gorgeous horse, a lovely walker and has a nice page too. He ticked all the boxes for me and he’s by a great sire. I’ll probably go down the point-to-point route with him.”

The 17-year-old mare had been a gift from Lady Maria Coventry to the Newell family, and after seeing her colt sell in the ring, Sybill Newell said: “We’ve had a dream run with him and the best hotels have been looking at him.

“I have two full siblings to Spirit Of Shankly and the filly will eventually join Tom Lacey. Unfortunately we lost Bells On Sunday at Chepstow on Friday, but that's this game for you."

In an end-of-sale statement Goffs UK chairman Henry Beeby and managing director Tony Williams commented: "The last two days have been an excellent start to 2017 with growth in every area of the Doncaster January Sale.

“Our Day 1 horses-in-training returned a vibrant sale from start to finish with massive rises in every statistic to demonstrate, yet again, that Doncaster is the measure of any venue for the category.

“Wednesday’s National Hunt foals also enjoyed a strong trade especially for those stand-out lots with the looks and pedigree to most recommend them. Doncaster has always been a rich source of top class National Hunt potential and we're confident that several of today’s foals will make their mark in future sales and then on the racecourse."

FIRST PUBLISHED 6:58PM, JAN 25 2017
I came here to buy any Kayf Tara that I could and I’ve ended up buying three of them because he’s a serious sire