Lee and Murphy share top-lot honours at Cheltenham's May Sale 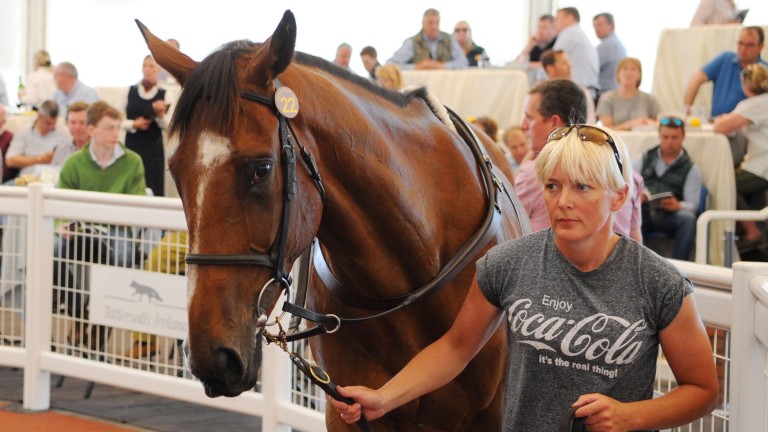 Lot 22: Carefully Selected was the first of two six-figure buys by Harold Kirk
JOHN BEASLEY
1 of 1
By James Thomas at Prestbury Park 11:57AM, JUN 2 2017

The National Hunt fraternity continued its annual restock at the Tattersalls Ireland Cheltenham May Sale on Thursday, and a small but select catalogue of point-to-pointers and form horses brought a solid afternoon of trade.

The first major play of the day ultimately held on to share its top billing, with Kerry Lee going to £130,000 for Storm Control, a four-year-old son of September Storm offered by Donnchadh Doyle of Monbeg Stables.

"He's a lovely, scopey horse and I really like his dam's line," said Lee of her new recruit, who had broken his maiden at the first attempt in a Lisronagh point in early April. "Obviously Monbeg have a fantastic reputation for producing quality horses. The whole team really liked him, me and dad came and inspected all the lots yesterday.

"I don't really know what we'll do with him yet, but we'll get him home and see what he's about. He's only a four-year-old and still eligible to run a bumper, but we'll decide where we go after he's had some lush Herefordshire grass and a good dose of fresh air and sun!"

It is little wonder Lee highlighted the gelding's female pedigree, as he is out of the Double Eclipse mare Double Dream, a half-sister to Charlie Hall Chase winner Grey Abbey. She has already produced three winners from four runners, including Paul Nicholls’ Listed-winning hurdler Tagrita.

This was Storm Control's third spin through the sales ring, having been bought by Doyle for €27,000 from the Goffs Landrover Store Sale after he had fetched €9,000 from Inch Bloodstock as a foal.

September Storm, a Listed winner in Germany, is a son of the late, great Monsun, and stands at Knockhouse Stud at a fee of €2,500. 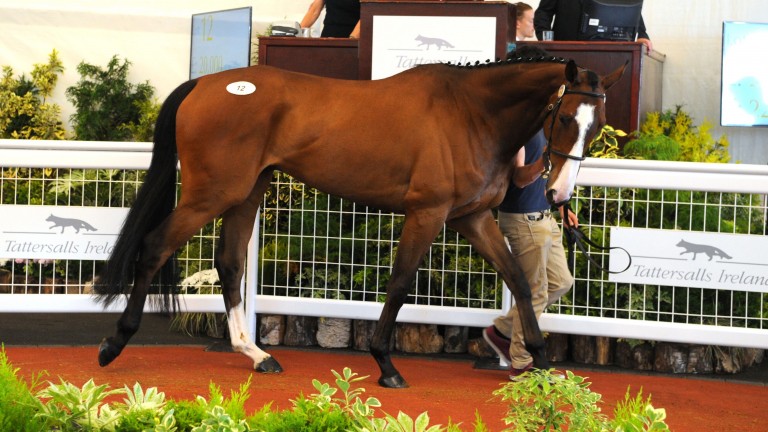 The other lot to bring £130,000 came late in the session when Aiden Murphy signed for another of Doyle's offerings, the four-year-old Loup Breton gelding Rio Quinto, who has yet to break his maiden but hit the frame on both starts to date.

"He's been bought for an existing client and he's coming back with me to Stratford now and will go out in the field, but I'm not sure who will train him yet," said Murphy. "He's a very nice-quality horse, and the form of both his races has worked out so he won’t be a maiden for much longer."

Doyle ended the sale as leading vendor, with seven lots having grossed £485,000.

One of the biggest physical specimens in the catalogue also brought with him a big reputation, and Carefully Selected duly went the way of Harold Kirk for £100,000.

The son of Well Chosen was offered by Ted Walsh; had been ridden by his daughter Katie when running out a facile winner of a Monksgrange maiden back in March; and had been the subject of positive reports from son Ruby - all of which meant Kirk was plainly intent on taking the five-year-old back to Closutton with him.

"He was very impressive when winning his point and came highly recommended from both Ruby and Katie," said Kirk, who signed for the gelding on behalf of his old ally Willie Mullins. "He's been bought as a staying chaser, but he'll have a break before probably running in a bumper. Ruby's been talking about him for a while and he's obviously a lovely, big, strong type."

Carefully Selected had been signed for by the Walsh-operated Greenhills Farm as a store for €10,000.

"I think he's a cracking horse, he has such a lovely way of going and is such a good jumper," said Katie Walsh. "The horse that fell at the last at Monksgrange went on and won, and the third has also won since so the form looks strong. And I don't ride too many point-to-pointers so the fact I was riding him was a bit of a give-away!"

The sizeable five-year-old is out of the Alderbrook mare Knockamullen Girl, whose page includes the likes of Lord Sam, Stroll Home and Can't Buy Time.

Just a few lots later Kirk was in action again, going to £100,000 for the twice-raced Ifyoucatchmenow, consigned by Denis Murphy's Ballyboy Stables.

The four-year-old daughter of Westerner had shed her maiden on her most recent outing at Bartlemy. She is a half-sister to a bumper winner, and out of Ifyoucouldseemenow, a Saddlers' Hall half-sister to Boyne Hurdle winner and Drinmore Novice Chase runner-up Sallie's Girl.

Tom Malone was among the familiar faces in action in the Cheltenham sales ring, and by the close of trade his name had appeared on the docket of eight lots at a combined spend of £455,000.

Among his notable purchases was Simone, consigned by Shane Nolan, who boasted one of the catalogue's most eye-catching pages as a winning half-sister to the high-class Simonsig - whose finest moments came at Prestbury Park when winning the 2013 Arkle and 2012 Neptune Novices' Hurdle.

"She's going into training with Lucinda Russell and will go novice hurdling," said Malone, who was accompanied at the auction by the Grand National-winning trainer. "She's a lovely filly with very good form, she should quite possibly have black type as I think she could have been third in the Grade 3 bumper at Punchestown had she been ridden a little differently."

The four-year-old daughter of Presenting's form had received a significant boost on the eve of the sale, with Lighthouse Warrior - runner-up when she landed a Punchestown bumper on her most recent start - scoring impressively over the same course and distance on Wednesday evening.

"She's not over-big but she's got a nice pedigree and the client we've bought her for wants to have some nice broodmares so hopefully she can gain some black type," added Malone.

Despite her pedigree, she had cost Adam Potts just €15,000 when bought as a store at the Tattersalls Ireland Derby Sale in 2015.

Later in the day Malone went to £120,000 for Moonshine Bay, a four-year-old Milan gelding out of Chantoue Royale, a sister to Grade 3 winner Royale Chantou.

"He's going to Colin Tizzard for an existing owner with the yard," revealed Malone. "He's a likeable horse that’s big and tall and just needs a bit of time to fill into this frame. I've been lucky with Milan and he has a nice pedigree.

"I'd say he'll go jumping rather than down the bumper route, but either way he's a lovely staying chaser for the future."

Malone also commented on the strength of trade during the sale, saying: "There's been a lot of affordable horses here today. Doncaster was very strong and maybe everyone thought they wouldn't be able to buy one at Cheltenham, but today's it has softened a bit which has allowed people to buy. It goes to show, you shouldn't be afraid to come and put your hand up."