Le Havre filly could be in line for Deauville after €75,000 sale

Aisling Crowe reports from the first session of the February Sale 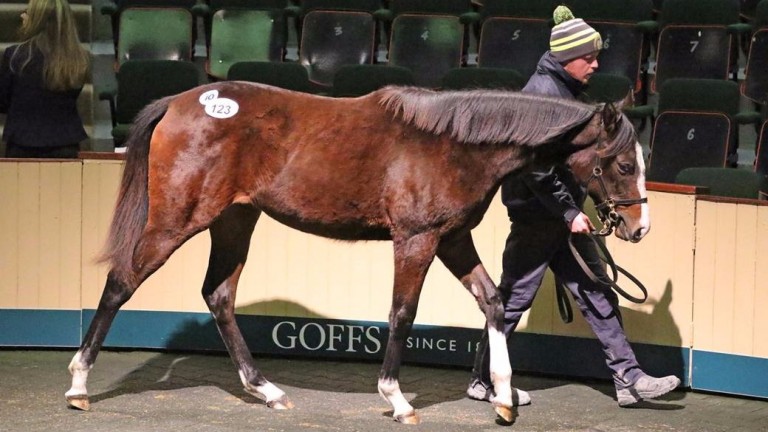 Le Havre's potency as a sire of Classic-winning fillies was at the forefront of buyers’ minds at Goffs on Tuesday, the opening day of the expanded February Sale.

The Morrin family of Pier House Stud were the successful bidders for the daughter of Le Havre out of the winning Sadler's Wells mare Kithonia. They paid €75,000 for the January foal, the third produce of her Listed-placed dam, who hails from the family of Prix du Jockey Club winner Hernando and his half-brother Johann Quatz, winner of the Prix du Lupin.

“She will be reoffered later in the year,” confirmed Ger Morrin. “She might be one for Deauville and hopefully she will be lucky for us. She is a good-looking filly, walks well and is from a good family.”

The filly was sold by Airlie Stud on behalf of her breeder Maria Niarchos, who bred and raced Kithonia. The dam won over 1m4f as a three-year-old and finished a close third in the Listed Prix Urban Sea.

“She is a very sweet filly and has done everything asked of her since we got her,” said Anthony Rogers of Airlie Stud. “She came to us about six or eight weeks ago from the Niarchos family - it was their decision to sell her in this sale and it turned out to be the right choice by them.”

Sparks flew towards the end of the session as yearling sons of Dandy Man and Camelot brought buyers flocking to the ring.

Tally Ho Stud struck a bid of €54,000 to get the better of a slow-burning duel for a colt by Coolmore’s triple Classic winner Camelot, who has his first runners this year.

The colt, offered by Prospect Stables, is the first foal out of his Oasis Dream dam Rugosa, a winner at three, from the family of champion and sire Xaar.

Strong demand for stock by Dandy Man continued unabated with two colts by Ballyhane’s popular stallion making the top six most expensive lots of the day.

Richard Fitzsimons of BBA Ireland went to €42,000 for a Kingsfield Stud-consigned son of Dandy Man from a good black-type family. The dam, Passion Planet, is a Medicean half-sister to Group 2 Lonsdale Cup heroine Pale Mimosa and to Nearly Caught, winner of the Group 2 Prix Kergolay.

“He was bought for Glencoole Stud and will be reoffered later at one of the yearling sales,” said Fitzsimons. “He was the standout yearling today, a really athletic colt with a great presence and by a stallion on the up.”

The other pricey son of Dandy Man was a colt out of the unraced Sir Percy mare Ruby Slippers from Harefield Cottage Stud, who was bought by TNT Thoroughbreds for €25,000.

Tally-Ho’s stalwart Kodiac had a sole yearling catalogued on Tuesday and Amy Marnane was the purchaser of the colt out of dual Group 3 winner Redstone Dancer from Milltown House Stud. A March foal, he is a half-brother to multiple winner Alnaahee and cost the young pinhooker €36,000.

The mixed nature of Tuesday’s catalogue was reflected in the results with a filly boasting an impeccable National Hunt pedigree one of the most expensive yearlings of the day.

Gerry Hogan bought the daughter of Flemensfirth out of an Old Vic mare for €32,000 on behalf of a client. The filly from Beeches Stud is a sister to the Gordon Elliot-trained Noble Endeavour, winner of the Paddy Power Handicap Chase at Leopardstown over Christmas, and the Listed placed Minella Daddy, successful twice over fences this season for Peter Bowen.

“She is a beautiful filly with a fantastic pedigree. She could go for a store sale or be kept to race - there are plenty of options with her. It is a great pedigree, self-explanatory really, and Flemensfirth works so well with the mare,” he added.