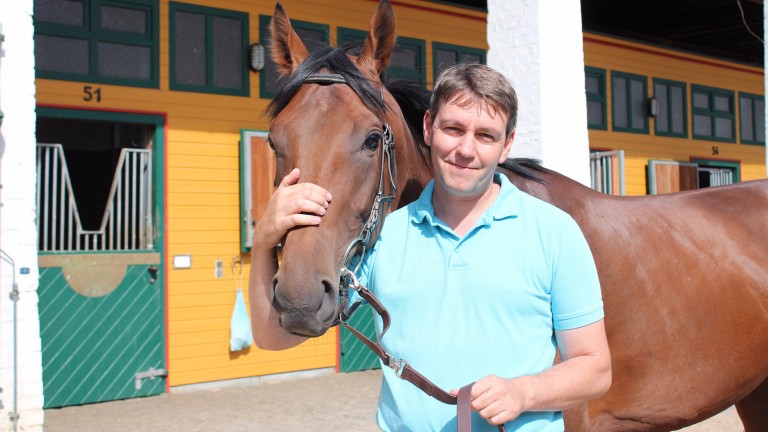 German Derby hero and freshman sire Sea The Moon supplied his first winner when son Must See The Doc scored at 40-1 at Doncaster on Saturday – at the expense of a pricey colt by Kodiac, a prolific source of precocious two-year-olds, no less.

Must See The Doc, who finished fifth for trainer Iain Jardine on debut at Ayr last month, showed a little greenness early in his second start but when the penny dropped he stuck on determinedly to gain a nose verdict over Fox Champion, the Richard Hannon-trained son of Kodiac who cost 420,000gns at the Tattersalls Craven Breeze-Up Sale in April.

Clearly, over an extended six furlongs on soft going at Town Moor, the stamina that Must See The Doc must have inherited from Sea The Moon played in his favour.

The Markus Klug-trained Sea The Moon was an easy winner over a mile at Cologne on his only start at two and developed into a superstar at three, when he won the Group 3 Fruhjahrs-Preis and Group 2 Oppenheim-Union Rennen before putting up an extraordinary display in the German Derby, sauntering to an 11-length victory - despite crossing to the stands' side rail – over subsequent Group 1 winner Lucky Lion.

Sea The Moon is a son of Sea The Stars – opening his account as a sire of sires here – and hails from the best German family of recent times.

He is out of the Monsun mare Sanwa, a sister to two German Derby winners – Samum and Schiaparelli – and a German Oaks winner in Salve Regina, later dam of Grade 2 winner Salve Germania.

Considering his race record and pedigree, we surely won't see the best of Sea The Moon's progeny until the end of this year and more likely until they turn three. Yet the stallion has beaten some more sharply bred first-season sires to the punch in getting a debut winner.

Must See The Doc was bred by owners Paul and Clare Rooney and is a half-brother to Only Imagine and Pearl River Star, winners in France, and Honzik Chipera, who has scored in the Czech Republic.

His dam Kong Moon, a middle-distance winner in France, is a sister to Hanami, winner of the Pretty Polly Stakes at the Curragh, and a half-sister to Dubai Rose, the Listed-winning dam of The Juliet Rose.