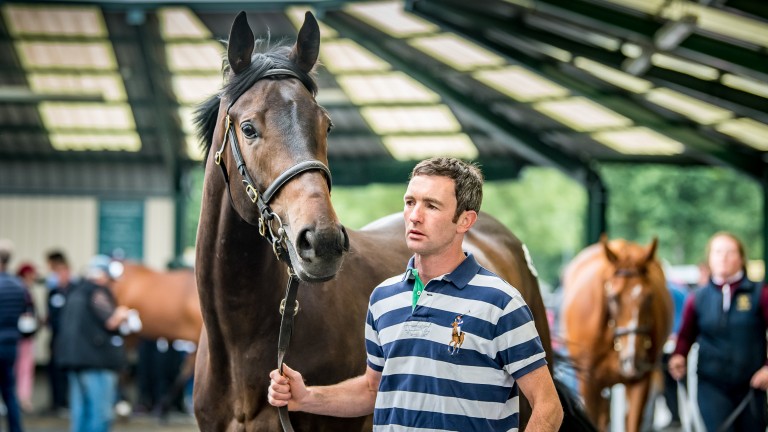 Frenzied demand for the best-credentialed stores during Part One of the Goffs Land Rover Sale on Tuesday meant the auction's record price fell no fewer than three times.

The session's most extraordinary moment came with the sale of a son of Flemensfirth out of Keep Face, a Poliglote half-sister to brilliant two-mile chaser Master Minded, for €325,000 – the highest price ever paid for a store horse at Goffs.

The stunning gelding was consigned by Michael Moore’s Ballincurrig House Stud for Patrick McCann, who purchased him a foal for the remarkable price of €110,000.

He drew admiring glances and knowing whispers all around the sale ground but when it came to his turn in the ring it was agent Tom Malone who won the day, paying the sky-high sum to ensure he goes to Paul Nicholls' Ditcheat operation, from where Master Minded was sent out to win back-to-back renewals of the Queen Mother Champion Chase.

“The trainer was all over this pedigree and he's a beautiful horse," said Malone. "He’s for Paul Barber and Paul Vogt and we knew we would have to fight to get him.”

Nicholls added that Barber, who lost the magnificent champion Denman to the infirmities of old age just last week, was keen to buy a horse with superstar potential.

“Paul has seen him a few times at Ballincurrig and he loved the horse," he said. "He wanted to buy a really nice horse and this was the one."

McCann – the managing director of Simply Fruit, whose headquarters are in Craigavon – was overwhelmed in the aftermath of the sale. He established Brookland Stables as a training centre in 2011 but it is now home to around a dozen young horses as his racing focus has changed. 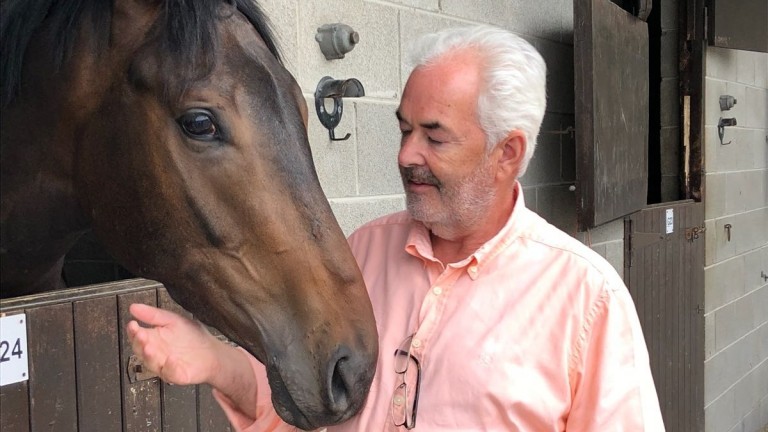 Patrick McCann with his pride and joy who was a bold pinhook at €110,000
Aisling Crowe
“I have six horses in training now with Anthony McCann but, to be honest, I get more pleasure from buying young stock at the top end of the market and selling them,” he said.

“We were very confident coming here today but I was tempted to keep him and run him in a point-to-point. He was an exceptional foal and thankfully he has turned into an exceptional horse."

The sale was a poignant one for McCann and the celebrations were subdued because of the recent death of the man who set the transaction in motion.

“It was Bill Ronayne who told me about him as a foal, before he ever went to the sale," McCann explained. "He found him and advised me to buy him. Bill was a very good friend. He bred Twin Plan, who I raced, and it’s so sad that he isn’t here and part of this. It’s a bittersweet day.”

Michael Moore was an integral part of the sale-topper’s story, the Ballincurrig House Stud owner caring for the horse on his Cork farm for three years. The gelding, the first foal of Keep Face, has forged strong bonds between those involved in his tale.

“He was always a gorgeous horse," said Moore. "We sold him as a foal for his breeder Louis Vambeck and it’s a fantastic story. Louis, Patrick and ourselves have all become good friends through this horse.

"Patrick paid a huge amount of money for him so it’s fantastic that he has been rewarded for that. It’s important that horses who are perceived to be the best make what they're worth at the sales ring.”

Keep Face has a two-year-old brother to the €325,000 Flemensfirth gelding who will represent McCann and Ballincurrig House Stud at next year’s store sales.

Reflecting on the sale, Goffs group chief executive Henry Beeby said: “The amazing top price of €325,000 for this beautiful son of Flemensfirth marks a huge achievement for this sale as it represents the highest price for a store at any sale since 2011.

"That three other lots also broke the €200,000 barrier was remarkable and demonstrated the strength and depth of the market, especially as they were knocked down to four different buyers.”

From the first crop of triple Classic winner Camelot, a beaming Anthony Bromley of Highflyer Bloodstock was delighted to secure the gelding on behalf of an existing client in Nicky Henderson’s yard.

“He's a gorgeous horse, simply stunning,” he said. “Both myself and Nicky loved him and he's for an existing owner in the yard. He could be a horse for the Land Rover bumper next year – he has the size and scope as well as the bloodlines to come to hand early.”

Promising sophomore sire Camelot is by Montjeu, the sire of Hurricane Fly, while there had also been a recent significant update to the pedigree.

“Montjeu comes through in Camelot and it's fantastic that the pedigree is still current, as his half-sister is the dam of Tornado Flyer, who won the Grade 1 bumper at Punchestown," Bromley added.

"We were hoping to get him for less, but at our sales meeting last night, Nicky, David [Minton of Highflyer Bloodstock] and myself all thought that he would be the sale-topper. His looks match his pedigree and hopefully he can do it on the track now." 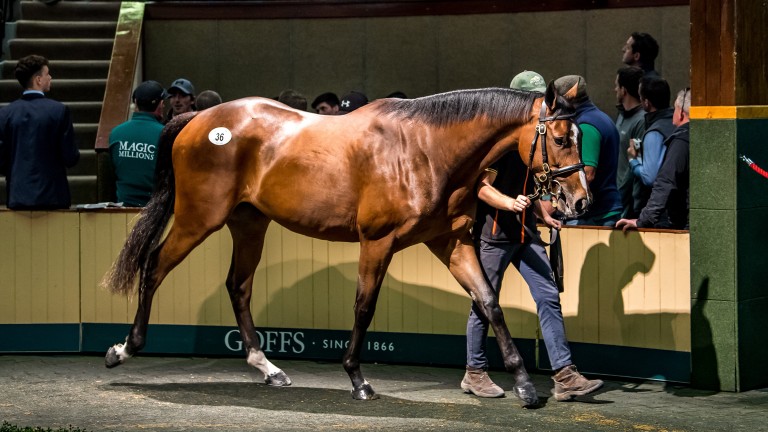 The Motherway family who run Yellowford Stud in Cork, renowned breeders and consignors of horses on the Flat and over jumps, knew they had a jewel on their hands – but they did not anticipate quite how coveted he would be by bidders.

“We're delighted with the result. We thought we had a nice horse coming here but you never really know until they go under the hammer. The sale has exceeded all our expectations,” said Paul Motherway.

“He took the whole thing in his stride, showed well and behaving himself too. If he's half as good as Hurricane Fly, he'll be some horse. It’s great for the farm and we're delighted that he's going to a great home.”

The family has three half-sisters to Hurricane Fly by Yeats at home and have another three-parts brother to the champion on the ground, as the dam Scandisk foaled a colt by Walk In The Park last week.

Saddler Maker son in the spotlight

A representative of Saddler Maker grabbed the record from the Camelot gelding when selling for €235,000 to trainer Henry de Bromhead. Consigned by Norman Williamson’s Oak Tree Stud, the bay gelding named Fissa had been the subject of much talk around the sales ground on Tuesday morning.

Most of the big hitters of the jumps market were in place as the gelding walked into a packed auditorium and bidding was brisk. 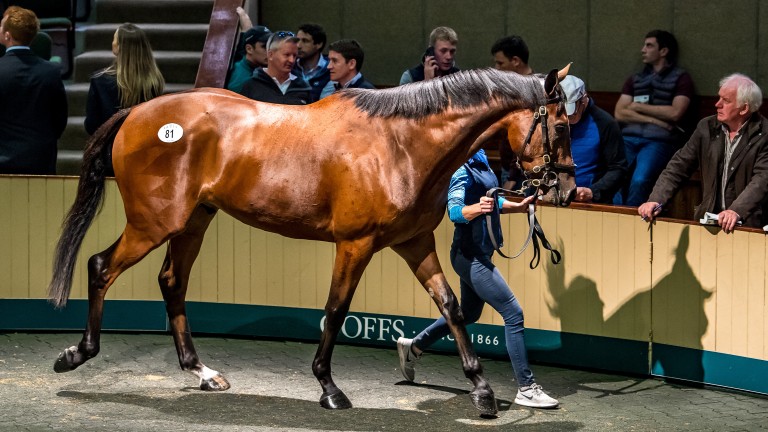 The Saddler Maker gelding who had been the subject of sales ring whispers
Sarah Farnsworth/Goffs
Aiden Murphy, the Highflyer team and Mags O’Toole – standing with De Bromhead – were the most determined of bidders but it was O’Toole who won out over Murphy in the final exchanges.

A delighted Williamson, no stranger to sales ring success, reflected on the record-breaking sale: “He's a beautiful horse and by the right sire. I bought him privately as a foal in France and I'm thrilled with the sale.

"I thought beforehand that if he made the top 20 horses here it would be a good result, so to top the sale is beyond my expectations. I hope he is very lucky for his new owners.”

Fissa is the first produce of Uvanana, an unraced daughter of Dom Alco who is best known as the sire of Grand National hero Neptune Collonges and Silviniaco Conti. He hails the family of Racing Post Chase winner Innox.

Aiden Murphy might have lost out on Fissa but his fortunes turned for the better in his pursuit of Glenwood Stud’s Kayf Tara gelding, ultimately gaining success with a bid of €210,000.

A brother to Constantine Bay, a Grade 2 winner over hurdles and fourth in both the Albert Bartlett and Sefton Novice Hurdles for Nicky Henderson last year, the gelding is from a strong German family. 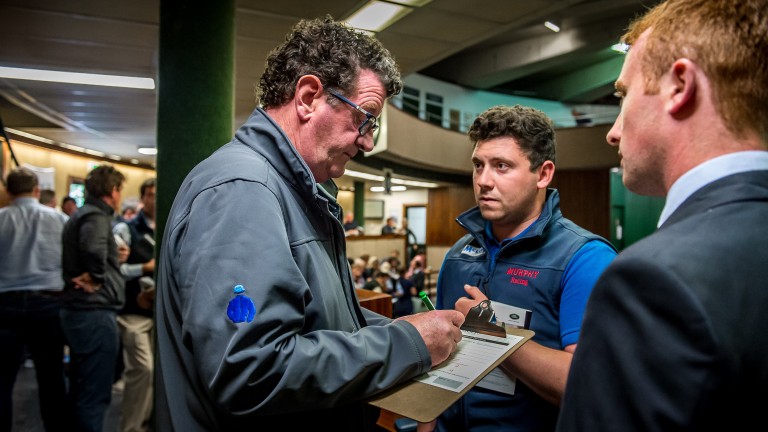 “I was underbidder on the Saddler Maker so I’m delighted to get this horse,” said Murphy. “They're two gorgeous specimens and I wanted to buy one or the other, so I'm pleased to have been able to buy one of them. He'll go to my son Olly to be trained.”

The sale completed a successful pinhook for Richard Frisby who owns Glenwood Stud, as the Kilkenny native purchased the gelding from Poplar Stud at the 2016 Goffs UK January Sale for just £29,000.

His four-year-old Shirocco half-sister Groovy Chick is in training with Evan Williams and could make her debut this week, as she is entered in the mares' bumper at Uttoxeter on Thursday.

On an astounding day of selling, besides those four horses who broke the €200,000 barrier there were ten more lots that realised prices of at least €100,000.

That total of 14 is four more than were recorded during both the first and second parts of last year’s Land Rover Sale.

Tuesday’s results demonstrated further gains for the Land Rover Sale in all major areas, with the aggregate leaping by 21 per cent from last year to €10,452,000.

The clearance rate for Part One of the Land Rover Sale was a very healthy 84 per cent.

“Extraordinary. That is the only way to sum up a truly stunning day’s trade [...] which is even more noteworthy following 2017, which itself was a record breaker,” summed up Beeby.

FIRST PUBLISHED 10:09PM, JUN 12 2018
His looks match his pedigree and hopefully he can do it on the track now

Royal Ascot and top European sire among plans for star Australian mare Fabergino Yearling market on the rise - so will stallion fees follow suit? 'Kayf Tara has carried the business and paid for a lot of my stupid mistakes!' Arrival of Threat and Van Beethoven coincides with French juvenile reappraisal