Behind the breeding of the crack trainer's battalions for Berkshire 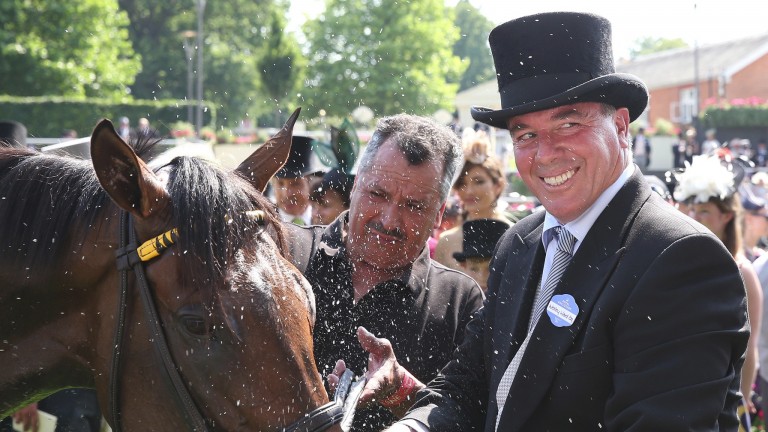 Wesley Ward was instrumental in the establishment of the late Scat Daddy as one of the world's foremost stallion talents, sending out Acapulco, No Nay Never and Lady Aurelia to win at Royal Ascot.

Scat Daddy's record now of course boasts a Triple Crown hero in Justify, from his penultimate crop of three-year-olds, while Coolmore have invested heavily in the son of Johannesburg who they stood at their Ashford Stud in Kentucky until his death in 2015.

Coolmore have leading Commonwealth Cup hopeful Sioux Nation, successful in the Norfolk Stakes last year, by the sire to aim at the royal meeting, along with several of his exciting final-crop two-year-olds headed by the exciting Sergei Prokofiev.

Ward has only one by Scat Daddy among his Ascot squad, though – the brilliant Lady Aurelia, who will be looking to defend her King's Stand Stakes crown and complete a sequence of three Royal Ascot successes, having taken the Queen Mary Stakes in 2016.

Lady Aurelia is a half-sister to stakes-placed Titletown Five out of D'Wildcat Speed, a daughter of Forest Wildcat who was a prolific winner in Puerto Rico who went on to land the Grade 2 Rampart Handicap over 1m1f at Gulfstream Park.

D'Wildcat Speed is out of Velvet Panther, a high-class sprinter and miler in Puerto Rico.

The gelding who flew at the finish to nail Brazen Beau on the line in the Diamond Jubilee Stakes in 2015 is back for a crack at the Wokingham Handicap at the age of eight.

Undrafted is the best runner on Racing Post Ratings to have emerged from the four crops left by Purim, a Shadwell Turf Mile winner by Dynaformer, before he succumbed to colic in January 2012.

Undrafted is one of four winners out of French Jeannette, a winning daughter of French Deputy. His third dam Native Fancy, a Hollywood Lassie Stakes winner by Our Native, is also ancestress of the top flight-winning siblings Reynaldothewizard and Seventh Street. American Story, a half-sister to that pair, is the dam of this year's Humana Distaff Stakes winner American Gal.

The Royal Hunt Cup hopeful is by sire of the moment Quality Road, who notched a Grade 1 double on the Belmont Stakes undercard on Saturday with Abel Tasman in the Ogden Phipps Stakes and Spring Quality in the Manhattan Stakes. Paved was a wide-margin winner of the Grade 2 Honeymoon Stakes at Santa Anita on the same day to boot.

Ward has already tasted success at Royal Ascot with a son of Quality Road, as he sent out Hootenanny to win the Windsor Castle Stakes in 2014. But then the stallion does have the royal meeting in his blood, as his third dam is 1974 Queen Mary Stakes winner Highest Trump and she was also ancestress of 1995 St James's Palace Stakes hero Bahri. 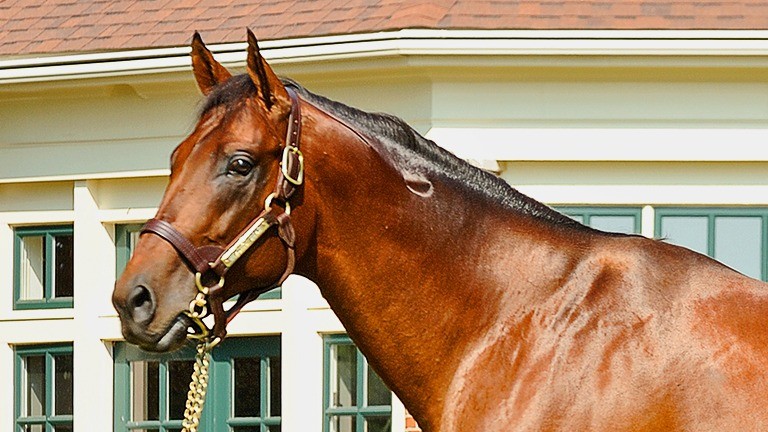 Master Merion is a Kentucky-bred but there are plenty of high-class European performers in his distaff pedigree too. He is out of the stakes-winning Danehill mare High Maintenance, a three-parts sister to Curragh Listed third Charlotte Bronte.

Artie Schiller has supplied elite winners in the US (Bowies Hero, My Conquestadory and We Miss Artie) and in Australia (Flying Artie and Laser Hawk) but has yet to make his presence felt in Europe.

That is not because he has a profile alien to European racing, though. His Breeders' Cup triumph came on turf at the expense of Ad Valorem, Majors Cast, Valixir and Whipper. Furthermore, he is a paternal grandson of Sadler's Wells, via the National Stakes winner El Prado.

Hemp Hemp Hurray's maternal pedigree also holds European significance. His dam Druidess may be a winning daughter of leading Kentucky sire Malibu Moon, but she is out of Lexa, winner of the Prix de Royallieu and later the Grade 2 Buena Vista Stakes and a daughter of Prix du Jockey Club hero Sanglamore and Prix de Malleret winner Leandra.

The versatility of this family is showcased by two of its highest achieving members in 2018: City Light, winner of the Group 3 Prix de Saint-Georges over 5f last month, and De Bon Coeur, who landed the Grand Course de Haies d'Auteuil, regarded as the French Champion Hurdle, over an extended 3m1f in recent weeks.

Bound For Nowhere
4yo b c The Factor-Fancy Deed (Alydeed)
Bred by Wayne Lyster, Gray Lyster and Bryan Lyster

Last year's Commonwealth Cup fourth Bound For Nowhere, being prepped for the Diamond Jubilee Stakes 12 months on, is by War Front's son The Factor, a dual Grade 1 winner over 7f on dirt.

The Factor got off to a good start at stud in America, and although not many of his offspring have raced in Europe he has another with a live chance at the royal meeting this year in Bandua, unbeaten in two starts for Dermot Weld and holding entries in the King Edward VII Stakes and Queen's Vase.

War Front gives Bound For Nowhere's pedigree an endorsement for Ascot, as he has given us the likes of Brave Anna, Declaration Of War and War Command.

There is speed in abundance elsewhere in Bound For Nowhere's pedigree as he is a half-brother to the Listed-placed sprinter Brinkley out of an Alydeed half-sister to dual Breeders' Cup Sprint winner Midnight Lute.

The filly who will be bidding to become Ward's fourth winner of the Queen Mary Stakes is by First Samurai, a son of Giant's Causeway bred by John Gunther, the man behind Triple Crown hero Justify. In his own racing career the stallion excelled at two, when he took the Hopeful Stakes and Champagne Stakes and finished third in the Breeders' Cup Juvenile.

First Samurai has not had much representation in Europe to date, although Shamaal Nibras was a decent handicapper in Britain for former trainers Ed Dunlop, Richard Hannon snr and Ismail Mohammed.

Chelsea Cloisters is a half-sister to Beggarthyneighbor, a Listed winner over 6f on dirt at Laurel, out of a winning daughter of Pulpit – a sire who brings his influence to bear more often than not on dirt, although his maternal grandson Due Diligence was runner-up in the Diamond Jubilee Stakes.

Postulant is a half-sister to Antrim Rd, winner of the Grade 2 Illinois Derby over 1m1f, and is out of a half-sister to dual Grade 1 winner Wavering Monarch and to the granddam of Derby victor Motivator.

Windsor Castle Stakes-bound Our Passion is a daughter of the influential Kentucky stallion Elusive Quality, who died in March.

The aforementioned Quality Road – who supplied Windsor Castle Stakes winner Hootenanny, remember – is another one by Elusive Quality.

Elusive Quality has also featured as damsire of Royal Ascot Group winners Mustajeeb, No Nay Never and Sound And Silence.

Our Passion is a half-sister to Amplification, a 7f winner at two for Ed Dunlop last year, and More Drama, who scored in a Wolverhampton claimer over an extended mile for Sylvester Kirk.

Their dam Our Drama Queen, by champion sire Danehill Dancer, was a 7f winner at Newbury at three for Richard Hannon snr and has Royal Ascot in her blood, having a mother and half-brother who both scored at the meeting, albeit in very different events.

She is out of Dance Parade, a daughter of Gone West who won the Queen Mary Stakes in 1996, and that mare also produced Leading Light, who landed the Gold Cup in 2014.

Elusive Quality was also by Gone West, so Our Passion is very closely inbred – 2x3 – to that breed-shaping sire.

Moonlight Romance – an easy winner over 5f at Belmont Park last month whose Royal Ascot target is undecided – has perhaps one of the more unfamiliar pedigrees among Ward's British-bound battalions.

She hails from the second crop of Liaison, a son of Indian Charlie who was a Grade 1 winner at two and ran sixth to I'll Have Another in the Kentucky Derby at three.

The stallion stands at Spendthrift Farm for $5,000 and although he has only one stakes winner to date, it is eye-catching for Moonlight Romance's chances that it was Bronx Beauty, a filly who scored in a Listed sprint at Monmouth at two last year.

Another by the sire, Santa Anita Oaks third Thirteen Squared, demonstrates he can be a conduit of class.

Moonlight Romance is out of a mare by Malibu Moon, an outstanding sire but one better known for his exploits with progeny on dirt, and although top-class turf horses don't exactly proliferate close up in her pedigree, a little further back you find a sequence of five black-type mares on grass.

Shang Shang Shang, an intended runner in the Norfolk Stakes, should be all right if she inherits just some of her sire Shanghai Bobby's precocity and class – the son of Harlan's Holiday having won the Champagne Stakes and Breeders' Cup Juvenile in an unbeaten, champion two-year-old season.

Although Shanghai Bobby is yet to make a major impact with his early northern hemisphere-bred runners – his first two-year-olds raced last year – he has been to the fore in South America, fielding the first two home in the Grade 1 Grande Premio Jockey Club Brasileiro for two-year-olds on Saturday. 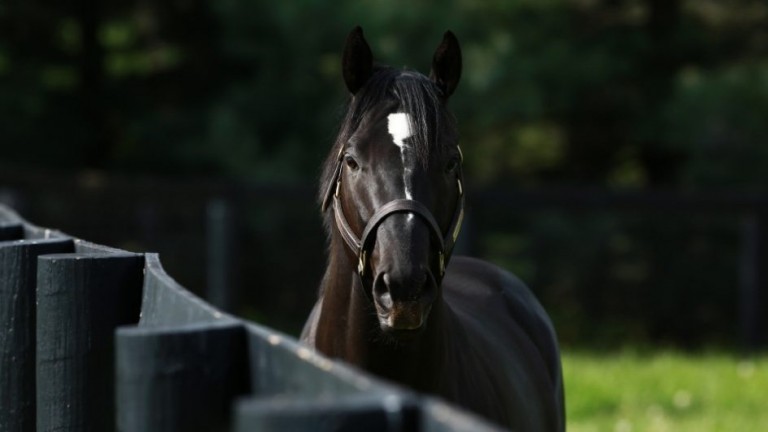 Shang Shang Shang gets a speed injection from her dam Yankee Victoria, who was Listed-placed over an extended 6f, while her granddam Elderberry Drive was a Listed winner over 7f.

Yankee Victoria is, as the name suggests, by Yankee Victor, who has fared well as a broodmare sire. His daughters have also produced this year's Meydan Group 1 winner North America as well as dual Grade 1 scorer Melatonin.

Stillwater Cove – slated by Ward to “run a big race” in the Albany Stakes – is another filly who could extend the hot streak for Lane's End's exciting young stallion Quality Road.

She is out of Celibataire, a daughter of Broken Vow – damsire of Group/Grade 1 winners Big World, Hampton Court and Runhappy – and is a sister to Interactif, a high-class performer at around a mile.

With the summer sales season in the US getting into full swing, read our 12-page supplement which contains all you need to know about the upcoming Fasig-Tipton July Sale, including the following: 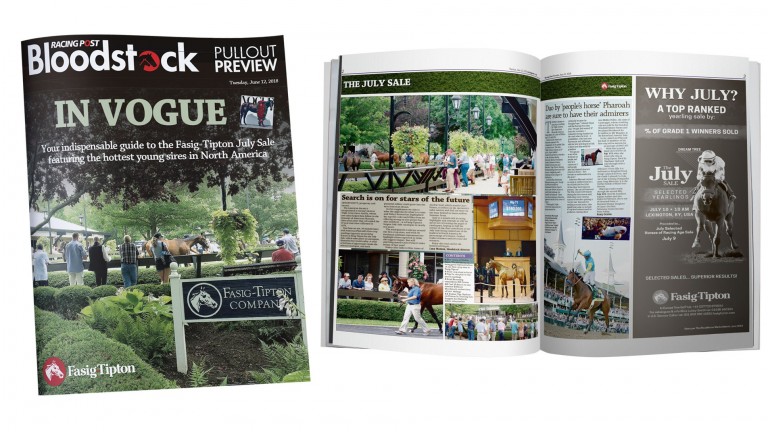 FIRST PUBLISHED 2:24PM, JUN 12 2018
The Royal Hunt Cup hopeful is by sire of the moment Quality Road, who notched a Grade 1 double on the Belmont Stakes undercard on Saturday