Two foals account for the top two lots so far 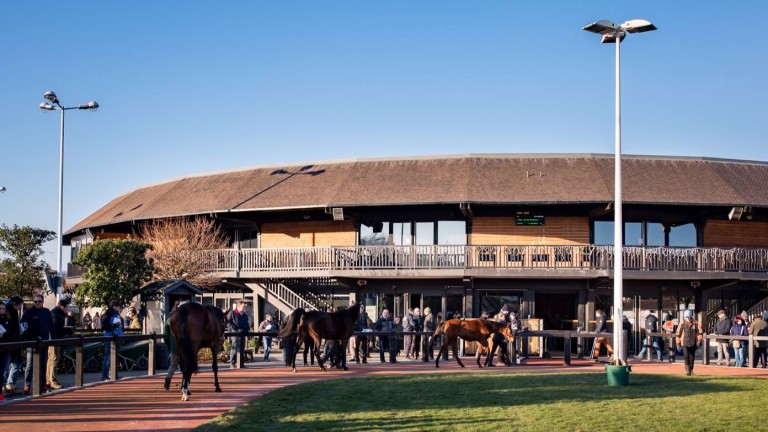 Arqana: lots prepare to enter the ring at the Breeding Stock Sale
Zuzanna Lupa
1 of 1
By Isabel Mathew 6:26PM, DEC 5 2016

Sons of leading French second season sire Wootton Bassett were in strong demand during a quieter third day of Arqana's Breeding Stock Sale on Monday with his sons accounting for two of the top lots so far.

The first, a January-born colt offered from Elevage de Trois Rivieres by Almanzor's sire, was knocked down to Marc-Antoine Berghgracht's MAB Agency for €45,000. Out of the dual winning Danehill Dancer mare Pasba, he hails from the family of Pilsudski and Youmzain.

"I've bought him on spec as he's such a good-looking individual," Berghracht said. "His sire has done extremely well, and we'll offer the colt for re-sale next year."

The first foal out of the unraced Blame mare Praise Dancing, he comes from the family of Group 2 winner Danceabout.

Francois Drion said: "He's very much in the mould of his sire, and we're delighted to have got him. We'll see how he develops, and the plan is that he'll come back here as a yearling."

Wootton Bassettt will stand at Haras d'Etreham at a fee of €20,000 next year and stud director Nicolas de Chambure added: "He's limited to a book of 130 mares, which will include Darkova, the dam of Almanzor."

FIRST PUBLISHED 3:50PM, DEC 5 2016
His sire has done extremely well, and we'll offer the colt for re-sale next year