16-year-old mare was offered in foal to Kendargent 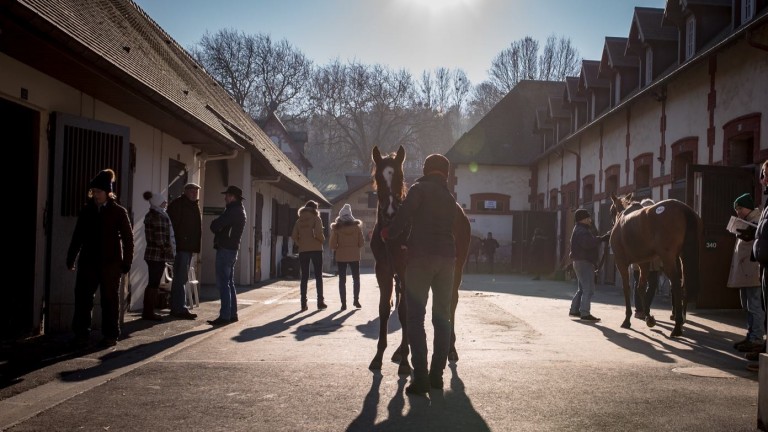 A lot is inspected at the Arqana December Breeding Stock Sale
Arqana
1 of 1
By Isabel Mathew 3:35PM, DEC 4 2016

Offered from Coulonces Consignment, the 16-year-old mare was bought for a partnership in foal to Kendargent.

"She's been purchased together with some good friends," explained Brummitt. "We'll send her back to [Morandi's sire] Holy Roman Emperor next year."

Back in 2012 at this sale, just a month after Morandi's win in the Criterium, which had followed on from a success in the Group 3 Prix de Conde, Brummitt had gone to €260,000 for the daughter of Bering. From the close family of Group 2 winner and Nassau Stakes runner-up Ana Marie, she foaled a colt by Kendargent this year for breeder Bjorn Nielsen.

Jamie Burns of Lodge Park Stud followed in his family's illustrious footsteps early on day two when buying his first mare, the aptly named Divine Promesse, for €59,000 under Emerald Bloodstock.

A ten-year-old daughter of Verglas, Divine Promesse is the dam of the Listed-placed Divina Comedia, who also finished third in the Grade 1 Clement Hirsch Stakes in America this season. She was sold in foal to Intello.

"She's good looking and hopefully the stallion might take off," Burns said. "I'm delighted to have got her, and we'll look at selling her progeny in due course," he added of the Haras de Castillon-consigned mare who is a half-sister to Listed winner Mondovino and is from the family of Stravinsky.