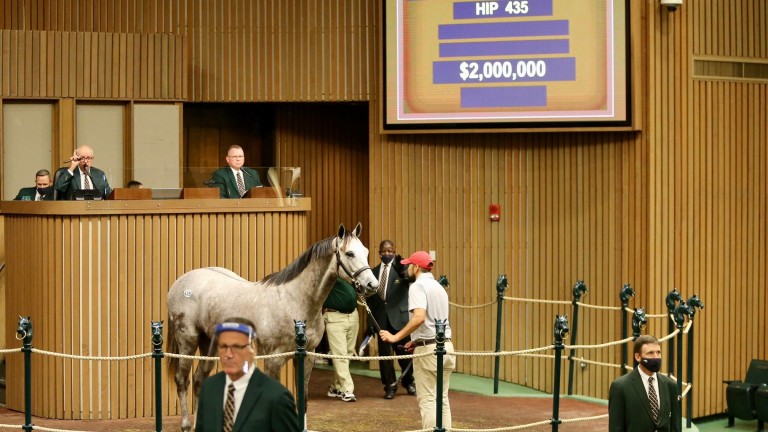 With a barrage of bidding firepower lighting up the board at Keeneland, the final minutes of the September yearling sale’s elite Book 1 were so electric on Monday that buyers and sellers alike could almost forget about the coronavirus cloud that has dampened down enthusiasm for bloodstock.

Among the final 11 horses to go through the ring during the second of two Book 1 sessions, four surpassed the magic seven-figure threshold, including a $2 million Tapit colt who became the overall sale leader and a $1.9m Into Mischief filly who took over the top position for her gender.

“It was a frantic end to the session,” exclaimed Keeneland director of sales operations Geoffrey Russell. “Under the current circumstances, we are very pleased with the session. We are back to that great intensity of bidding, the going back and forth. The atmosphere and electricity returned, so that is wonderful.”

“For 30 minutes at the end of the sale, we felt like there was no Covid,” added Keeneland president-elect Shannon Arvin.

Overall, 100 yearlings were reported sold for a gross of $44.535m and an average price of $445,350. Just as during Sunday’s opening Book 1 session, however, more than half the horses catalogued were either withdrawn or reported as not meeting their reserve prices.

In looking at Book 1 figures for the two days combined, including ten additional sales reported after bidding action ceased on Sunday, 216 yearlings have been sold for a total of $86.445m and an average of $400,208. Fourteen yearlings were sold for $1m or more, including nine on Monday.

Those figures are down, not surprisingly, from the first two sessions in 2019, when 240 horses were sold for gross of $101,183,500 and an average of $421,598. With 2019’s Book 1 comprising three sessions, 20 yearlings were sold last year for $1m or more including the $8.2m sale-topping American Pharoah half sister to Into Mischief and champion Beholder.

Shadwell ramp it up after sluggish start

About midway through the session, Rick Nichols, general manager of Shadwell Farm in Lexington, bid $1.6m - at that time, the highest price of the sale - for a Medaglia D’Oro filly who is a half-sister to Group 3 winner Sergei Prokofiev, who was in the news himself on Monday with his move to Whitsbury Manor Stud. 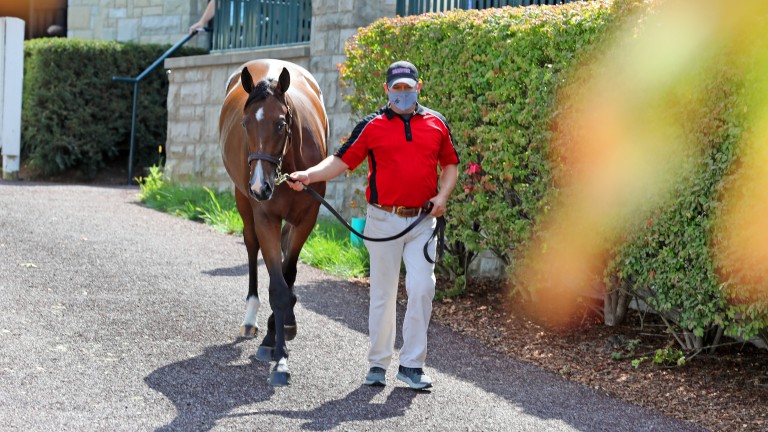 The Medaglia D'Oro half-sister to Sergei Prokofiev hammered down to Shadwell for $1.6m
Keeneland photo/Z

That bid was the first major transaction of the auction on behalf of the Maktoums, who typically lead the September marketplace with purchases for Shadwell and Godolphin.

Nichols said he had received the go-ahead from Sheikh Hamdan before the session started to acquire some top fillies, although he noted that the directive was for quality, not quantity.

He said of Sergei Prokofiev’s half-sister: “She’s just a beautiful filly, extremely well bred, and her conformation is correct. She is just one of those you’ve kind of got to have. [Shadwell’s] broodmare band [in America] is starting to get a little old, so we need to rejuvenate it a little bit. We’re out looking for a nice colt but mainly concentrating on some nice fillies.”

Shadwell finished the session with three purchases, all by Medaglia D’Oro and including one colt, for a combined $2.475m.

Breeder and consignor David Anderson of Anderson Farms in Ontario paid tribute to the $1.6m filly’s dam, the nine-year-old Tapit mare Orchard Beach, whose first four foals have now been sold as yearlings for a total of $4.05m.

“She’s just been outstanding,” he said. “I bought the grandmother [the Unbridled’s Song mare Song And Danz] in foal carrying Orchard Beach. Unfortunately, when I brought Orchard Beach to [2012 Keeneland September] sale, she came up lame. I bought her back [for $200,000]. It was just a fluke.

“And here she is. She’s put a lot of food on the table for my family.”

Son of Tapit swaggers to the top

The biggest star of the day, however, was the swaggering, sale-topping $2m grey son of Tapit bred by Barbara Banke’s Stonestreet Farm as the second foal produced by Grade 1 winner Tara’s Tango, by Unbridled’s Song. He was consigned as hip 435 by Eaton Sales, agent for Stonestreet. 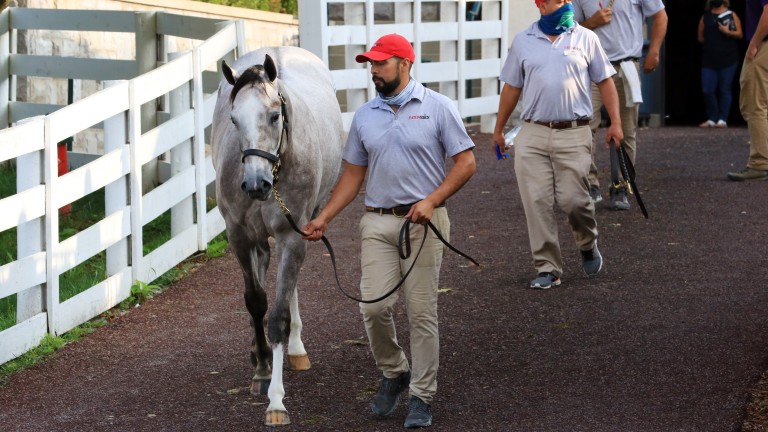 The swaggering son of Tapit who topped this year's Book 1 at Keeneland
Keeneland photo/Z
It took the combined forces of four major operations to secure the Tapit colt: Eclipse Thoroughbred Partners, which campaigned Tapit’s Belmont Stakes-winning son Tapwrit in partnership; Gainesway Farm, which stands Tapit and Tapwrit; Robert LaPenta, another partner in Tapwrit, and Winchell Thoroughbreds, which raced and retained a major interest in Tapit.

Aron Wellman of Eclipse said Banke thought so highly of the colt that she wanted to be involved with the ownership group.

Wellman told reporters: “Hopefully between all of us we have plenty of good mojo. All I care about is that you are interviewing our partnership after [the colt] wins a Grade 1.”

Banke added: “He has a lot of energy. He’s also speedy and he’s the man. I view him as being an excellent, excellent prospect,”

Like Orchard Beach, Tara’s Tango is blazing a trail as a commercial broodmare. Last year, Godolphin paid $2.15m for her first foal, a Medaglia D’Oro colt who has been named Alexander Valley and who is in training at Belmont Park in New York for his debut.

Best in for Into Mischief

Just minutes after the Tapit colt was sold, Larry Best of OXO Equine continued his acquisition of offspring by leading American sire Into Mischief when paying $1.9m for a filly out of the Medaglia D’Oro stakes-winning mare Taylor S, a half-sister to Grade 1 winner Liam’s Map and promising young sire Not This Time.

Best bought four yearlings in the first two sessions for a total of $4.1m, with his purchases including two fillies and a colt by Into Mischief and a colt by Pioneerof The Nile.

“Book 1 has been unbelievably strong - it blew away my expectations,” said Best, who focuses on the very top of the market.

But Best is not the only one collecting yearlings by Into Mischief, who sired recent Kentucky Derby winner Authentic. The Spendthrift Farm stallion led all Book 1 sires with 20 yearlings sold for a total of $13.085m and an average price of $654,250.

Two other seven-figure fillies by Into Mischief were sold on Monday with each costing $1.025m.

Donald Adam of Courtlandt Farm bought hip 275, produced by a stakes-placed granddaughter of undefeated champion and Broodmare of the Year Personal Ensign, while Liz Crow signed the ticket on behalf of a client she would not disclose for hip 405, a half-sister to Grade 1 winner Gift Box. 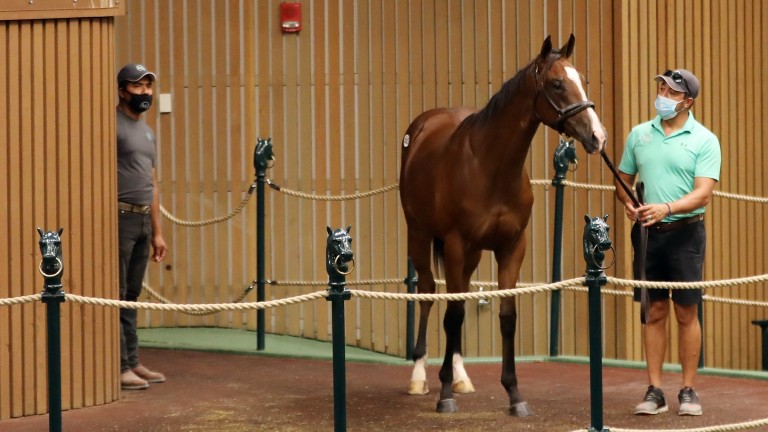 The filly by Into Mischief out of Special Me who went for $1.025m to Liz Crowe for an undisclosed client
Keeneland photo/Z

One hip later, a Medaglia D’Oro filly out of stakes winner Thirteen Arrows - a daughter of Grade 1 winner Stop Traffic and a half-sister to Grade 1 winner and 2018 leading American freshman sire Cross Traffic - was sold for $1.1m to What Time Is It Racing, represented by UK native and current California-based trainer Dan Blacker.

The principal of What Time Is It Racing is new to the sport, said Blacker, who added: “This filly just seems like a superstar. I am really thrilled.”

In other high-level action, Texas-based veteran owner Mike Rutherford continued to wager on the success of Triple Crown winner American Pharoah by spending $1.2m on the stallion’s daughter out of Grade 1-placed Modification, by Vindication, who was cataloged as Hip 291.

“Probably too expensive, but she was beautiful, the best filly I’ve seen, a powerhouse,” said Rutherford, who has previously raced the likes of Grade 1-winning fillies Lakeway and Cara Rafaela (the latter the dam of Bernardini). He noted that he currently has six offspring of American Pharoah in training.

American-based buyers dominated the action in Book 1 as coronavirus travel restrictions and worries clearly played a role in reducing international trade. However, Japan’s Yuji Hasegawa, who in 2019 spent $1.5m at this venue on the Tapit full-brother to dual American champion Unique Bella, has been successfully bidding via the internet, Russell indicated.

After receiving information from advisors on the sale grounds, Hasegawa bid from Japan to land a pair of beautifully bred colts by Tapit and Arrogate for a total of $1.575m.

The $825,000 Tapit colt, sold late on Monday, is the second foal out of Breeders’ Cup Distaff winner Stopchargingmaria, whereas the $750,000 son of Arrogate is a half-brother to Grade 1 winner Weep No More. The price for the Arrogate colt is the highest paid to date for a yearling from the late stallion’s first crop.

Day one of Keeneland

FIRST PUBLISHED 9:19AM, SEP 15 2020
We are back to that great intensity of bidding, the going back and forth. The atmosphere and electricity returned