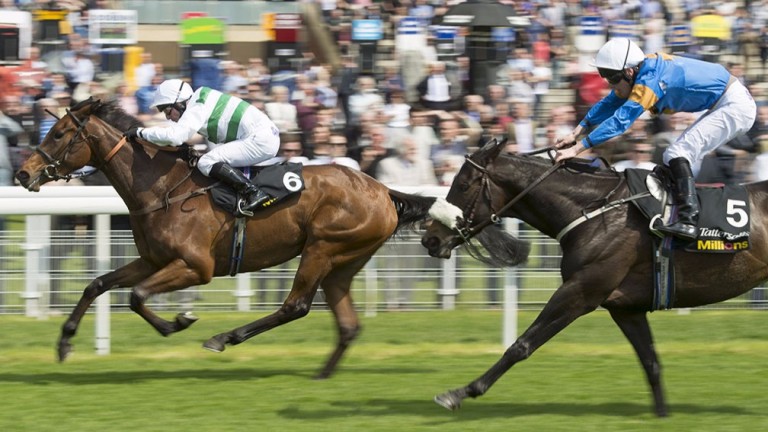 Kirsten Rausing's Lanwades Stud in Newmarket has announced the covering fees for its four-strong stallion roster for the 2017 breeding season.

New to the Lanwades roster for 2017 is Bobby's Kitten, a Grade 1-winning son of Kitten's Joy, whose introductory fee has been set at £12,500.

Bobby's Kitten carried the colours of Ken Ramsey to success in the 2014 Breeders' Cup Turf Sprint for Chad Brown before transferring to Dermot Weld for a European campaign for the 2016 turf season. He made just one appearance for Weld, when running out a hugely impressive eight-and-a-half length winner of the Listed Cork Stakes.

Standing his eighth season at Lanwades is Archipenko, who has had his fee held at £10,000. The 12-year-old son of Kingmambo has sired the likes of Group 1 winner Madame Chiang, unbeaten Polish sensation Va Bank and the promising Algometer.

Sea The Moon, the five-year-old Germany Derby-winning son of Sea The Stars whose first yearlings will be hitting the sales in 2017, will remain at £15,000.

The quartet is completed by Derby winner Sir Percy, who has been represented by top-level winners Wake Forest and Sir John Hawkwood in 2016. His fee also remains the same for the upcoming breeding season, with the 13-year-old son of Mark Of Esteem due to stand his third consecutive covering season at £7,000.

On the release of the fees Rausing commented: "Lanwades will stand Group 1 winners Archipenko, Sea The Moon and Sir Percy at unaltered fees for 2017. With the continued good racing and sales results of Group 1 sires Archipenko and Sir Percy, whose yearlings this year averaged 11 times his 2014 fee, we hope breeders will appreciate the Lanwades value these fees represent.

"We look forward to seeing the first Sea The Moon foals in the ring at Tattersalls, Goffs and Arqana - they are subject of very favourable reports.

"It's exciting for us to introduce the first stallion son of the great Kitten's Joy to stand in Europe, Grade 1 winner Bobby's Kitten - the specialist miler who could also sprint, as he did when winning the Breeders' Cup Turf Sprint, beating No Nay Never and Caspar Netscher.

"Bobby's Kitten has been extremely well received by European breeders, and we are delighted to be standing him here at Lanwades. His sire Kitten's Joy is now recognized as a major player in the worldwide breeding industry and it was gratifying to see him siring two-year-old winners Oscar Performance and Kitten's Cat at the Breeders' Cup meeting this past weekend."

FIRST PUBLISHED 4:13PM, NOV 7 2016
His sire Kitten's Joy is now recognized as a major player in the worldwide breeding industry and it was gratifying to see him siring two-year-old winners Oscar Performance and Kitten's Cat at the Breeders' Cup meeting this past weekend