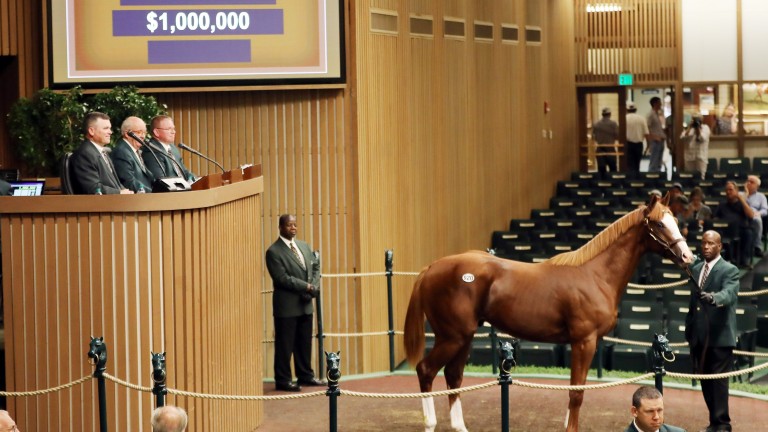 Bidding at Keeneland went into seven figures again at Book 2 for a Union Rags colt
Keeneland photo
1 of 1
By Ron Mitchell of BloodHorse 10:28AM, SEP 14 2019

Led by a chestnut son of Union Rags sold for $1 million, Friday’s fourth session of the Keeneland September Yearling Sale was a huge day for the Farish family's Lane's End.

The session topper consigned as hip 920 was bred in Kentucky by G. Watts Humphrey and was purchased by SF Bloodstock, Starlight Racing, and Madaket Stables, the most active buyers on the day with five horses bought for $3,975,000.

The colt is out of Miss Squeal, a daughter of Lane's End's former leading sire Smart Strike who earned $108,966 and is a half-sister to stakes winners Outplay, Raconteur and Katerbug. His female family includes Grade 1 winners Dream Deal, Clear Mandate and Strong Mandate, among others.

"There was a great selection of horses in here to work with," said SF Bloodstock's Tom Ryan, who was accompanied by trainer Bob Baffert and bloodstock agent Donato Lanni. "He's a big, obvious horse and the competition was strong from all over, and that's the position we found ourselves in if we wanted to buy him."

Of the bullish activity by the partnership on Friday, Ryan said: "It's been a tough week to buy. We bought no horses the first day, three the second day, none the third day, and now here we are in the first day of the second book.

"There's a great selection of horses in here today to work with. When their pedigree comes together, their physical and everything works out veterinary-wise, that's where we are."

"That was the perfect storm where two people who loved the horse went at it," said Allaire Ryan, Lane's End's sales director. "He was a quality individual with the mind of a saint. He was a perfect gentleman coming up here - a really classy colt. The momentum and activity today has been great."

Shortly after the Union Rags colt lit up the bid board, an American Pharoah (923) from Lane's End, as agent for Dixiana Farms, was bought by Don Adam's Courtlandt Farm for $975,000. The filly is the first foal out of the winning Indian Charlie mare Momentary Magic, a half-sister to stakes-placed Stage Magic, the dam of Triple Crown winner Justify.

Momentary Magic was bought while carrying the American Pharoah filly in utero for $290,000 from James Keogh at the 2017 Keeneland November Breeding Stock Sale.

"We thought she was Book 1 quality with that family and being by American Pharoah," said Ernest Retamoza, Courtlandt farm manager. "We felt about getting her for the price we did."

Retamoza said the filly would be sent to trainer Mark Hennig after being broken at Courtlandt in Florida. 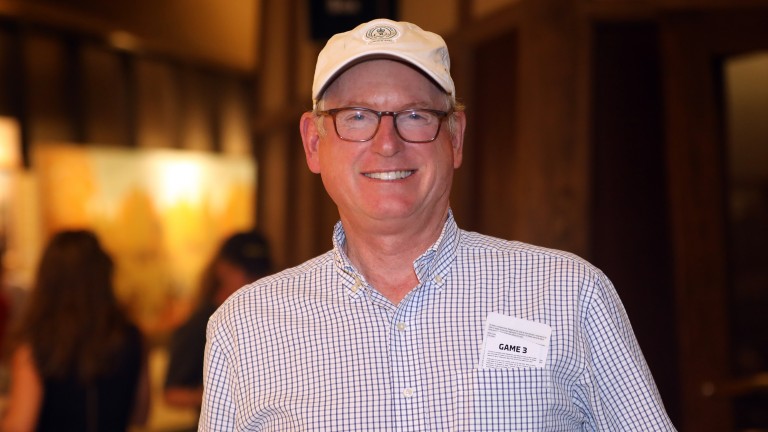 Bill Farish of Lane's End was thrilled with Friday's trade
Keeneland photo
"We had a great day," said Lane's End's Bill Farish, whose sales agency grossed $9.45 million for 29 horses sold. "It was fun to see the Quality and Union Rags yearlings sell so well. It's a hell of a horse sale. Book 1 was fabulous, and Book 2 has carried right over."

There was vibrant, stiff competition throughout the entire session, indicating a carryover from the sale's three-day Book 1 mentioned by Farish.

"It was a solid start to Book 2," said Geoffrey Russell, Keeneland's director of sales operations. "We made a concerted effort this year with Book 2 to trim the numbers a little bit. Our goal was to continue on from Book 1 to keep the quality level as high as we can as we go into Book 2, and the numbers reflect that worked out pretty well.

"It was vibrant, and the last hour and a half was spectacular," Russell said. "You've seen some buyers left over from Book 1, and a lot more buyers buying horses together in Book 2 than they could in Book 1. It is very domestically heavy, which is very good for our industry."

Russell said the day of no sales between Books 1 and 2, primarily designed for Keeneland to relocate horses to prepare for the next book, has had an unintended positive consequence.

"It has become very useful," Russell said of the dark day, noting there was strong activity of inspections in the barns on Thursday. "The dark day gets these buyers to get ahead of the game."

Russell said the day's dynamic in which there was a flurry of late buying could reflect buyer mentality.

"They sit on their hands a little bit and then get concerned that there are 50 horses left and they haven't bought anything yet," Russell said.

King Of Change made available to cover on southern hemisphere time