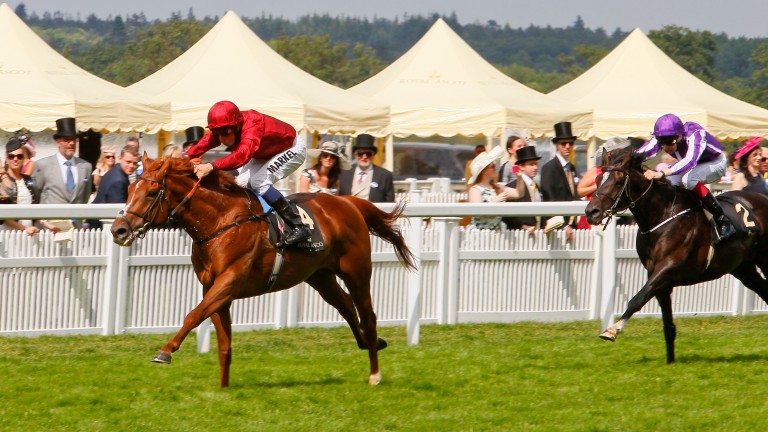 LADY BAMFORD'S Group 2-winning homebred Eagle Top is to take up stallion duties at Hedgeholme Stud in Darlington for the 2017 breeding season in a deal arranged by Bamford's bloodstock adviser and racing manager Hugo Lascelles.

A five-year-old son of Pivotal, Eagle Top was bred by Lady Bamford out of her Listed-winning In The Wings mare Gull Wing. He is a brother to this season's Group 2 Dante Stakes hero Wings Of Desire and to 2013's Group 2 Park Hill Stakes winner and Oaks third The Lark. Gull Wing is also a half-sister to dual Oaks heroine Sariska.

Trained by John Gosden, Eagle Top made a winning start to his career when he landed a 1m3f maiden at Newbury as a three-year-old. Having progressed rapidly he went on to claim the Group 2 King Edward VII Stakes at Royal Ascot, beating subsequent Group and Grade 1 winner Adelaide by three-and-a-quarter lengths on just his third outing.

At four he finished in the frame on three occasions and narrowly missed out on success at the highest level when beaten a nose by Postponed in the King George VI and Queen Elizabeth Stakes.

After two runs this year it was announced in September that Eagle Top had been retired from racing.

Andrew Spalding of Hedgeholme Stud said: "I was looking for a stallion to complement Intrinsic and it's a great opportunity for breeders to get into a good bloodline.

"Pivotal has been such a good sire of sires and what's appealing about Eagle Top is that he's from a very good family.

"He's a good-looking, strong horse and the fact that he won up to twelve furlongs is a plus. Hopefully he should get a good cross section of mares."

A fee for Eagle Top will be announced at a later date.