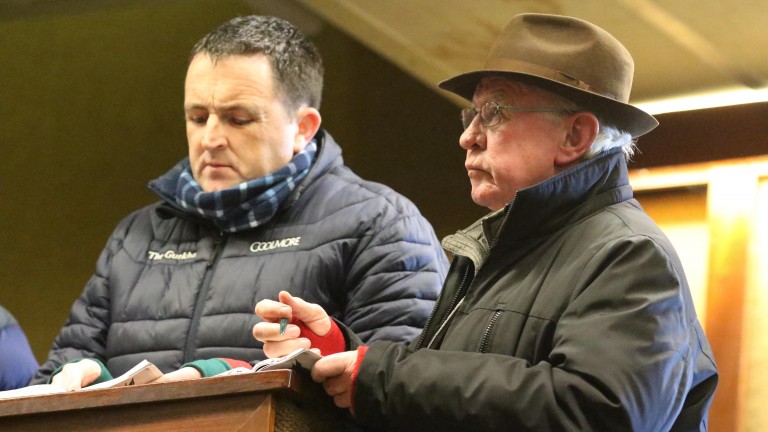 Tuesday was a momentous day in the history of Irish women, marking a century since limited suffrage was introduced and so at Goffs, it was fitting that a filly would provide the main story on a busy beginning to the February Sale.

The uncertainty and nervousness that has infected global financial markets of late did not prove contagious for the bloodstock market with trade on Tuesday recording significant gains, unlike the FTSE and other stock exchanges.

In 2017, the first year the February Sale was held over three days, nine horses sold for €20,000 or more on the opening day whereas on Tuesday, that number more than doubled to 20.

Leading the way was a daughter of Kodiac, the Tally-Ho Stud sensation who just six weeks ago etched his name into the record books with a staggering tally of global juvenile winners in a calendar year. His two-year-old crop of 2017 contained 61 individual winners and unsurprisingly buyers were keen to take advantage of the first opportunity to purchase his yearlings in 2018. 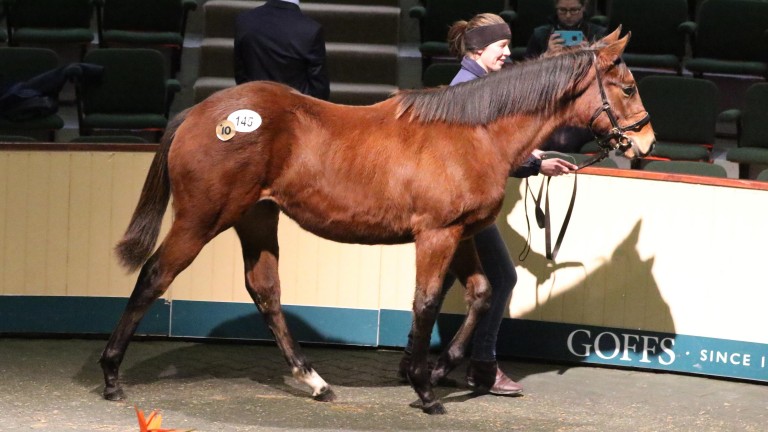 The Kodiac filly who was the session topper at €130,000
Peter Mooney / Goffs

Tim Hyde snr is a smart judge of horseflesh with a wealth of knowledge stored up and he claimed Tuesday's most prized yearling, a filly by Kodiac sold from Jacqueline Norris's Jockey Hall Stud for €130,000.

The farm has enjoyed plenty of success at this venue, including at the 2017 February Sale, when Norris began the Ballymacoll Stud dispersal by selling Islington's Dubawi filly called Edith Wharton for €200,000.

"She is a lovely filly and a very good model of a horse out of quite a highly rated mare and she will be offered for resale at one of the yearling sales in the autumn," said the Camas Park Stud supremo.

The session-topper is the third foal out of Sindjara, twice a winner and the dam of Claire Underwood, a three-year-old in training with Willie McCreery. Sindjara is out of the Listed Lingfield Oaks Trial winner Sindirana who, as her name would suggest, is from the Aga Khan's family of Arc and dual Derby hero Sinndar.

Bated Breath has been gradually warming up in his second career and produced Phoenix Stakes scorer Beckford from his second crop, his best performer to date with a Racing Post Rating of 113.

A solitary colt from his fourth crop was catalogued on Tuesday at Goffs and the Ridge Manor Stud-consigned yearling garnered much attention. Inbred 3 x 3 to the brilliant and influential Danehill, he is the first foal out of Starlight Symphony, a winning daughter of Oratorio trained by Eve Johnson Houghton.

Barry Mahon of Goodwill Bloodstock signed for the April-born colt at €70,000 and the dark bay from the family of Classic-placed Karmifira will most likely reappear at one of the yearling sales later in the year.

A timely update for another Kodiac filly helped propel Tullamaine Castle Stud's offering, a daughter of the Selkirk mare Portentous, towards the top of the charts. Victory last month for Acker Bilk took the mare's strike rate to a perfect three winners from three runners and Marc Antoine Berghgracht of the MAB Agency went to  €62,000 to secure Tuesday's offering.

"She will be offered for resale at one of the autumn yearling sales – either here or at Tattersalls. The filly has a nice page and the recent update is a plus for her," said Berghgracht.

Another to go for €62,000 was a Castlebridge-consigned colt by Fastnet Rock, who was purchased by Guy O'Callaghan of Grangemore Stud and, like so many others on the day, is likely to reappear at an autumn yearling sale.

"He is a very good-looking colt by a good sire and from a nice family," said O'Callaghan.

The April-born colt is the first foal out of On A Pedestal, a daughter of Montjeu who won at three for Aidan O'Brien and was bred by the champion trainer and his wife Annemarie. On A Pedestal is a half-sister to Group 3 winner Empowering and to Blue Angel, the dam of Viren's Army, who was purchased by Godolphin for £700,000 at last year's Goffs London Sale.

Agent Jamie Railton was on the lookout for horses suitable for the syndicates he puts together for the sales and in Ballybin Stud's son of reverse shuttler Hallowed Crown, he found a perfect candidate.

The bay is a half-brother to Absolute Blast, a daughter of Kodiac who was placed in a Group 1 last season. They are out of the Marju mare Perfect Fun, a winning half-sister to Charming Prince, who was third in the Prix Jean-Luc Lagardere, and they descend from multiple Group 1 winner Ma Biche.

"He is a sweet little horse and will either be for the Orby here or Book Two at Tatts," Railton confirmed.

Top of the horses in training section was Karakour, a three-year-old gelding from the Aga Khan Studs formerly trained by Mick Halford.

The winning son of Dalakhani is out of Karamaya, a winner at two and half-sister to Group 3 Prix du Prince d'Orange winner and sire Karaktar, and was purchased by agent Barry Lynch for €45,000.

"I have bought him to go racing in Singapore for clients whom I previously purchased an Aga Khan horse for, that looked very promising over there but unfortunately got injured," explained Lynch. "This gelding is a very clean, straightforward horse who won first time out. I thought that was a very good performance to win from such a wide draw at Dundalk and hopefully he will progress in his career." 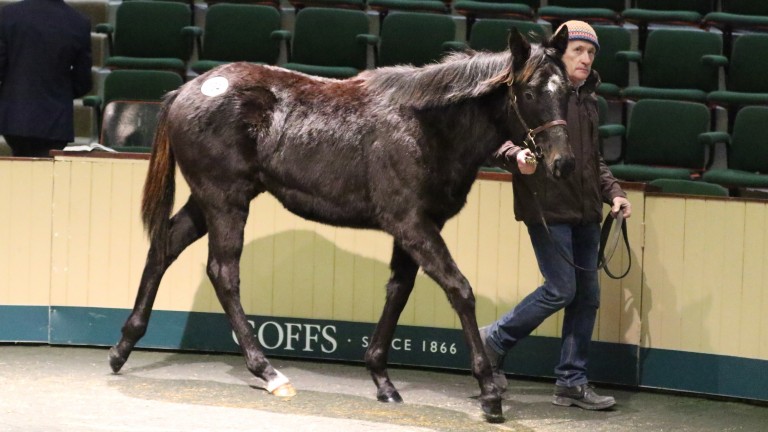 The Bated Breath colt who fetched €70,000
Peter Mooney / Goffs
FIRST PUBLISHED 8:55PM, FEB 6 2018
She is a lovely filly and a very good model of a horse out of quite a highly rated mare and she will be offered for resale in the autumn